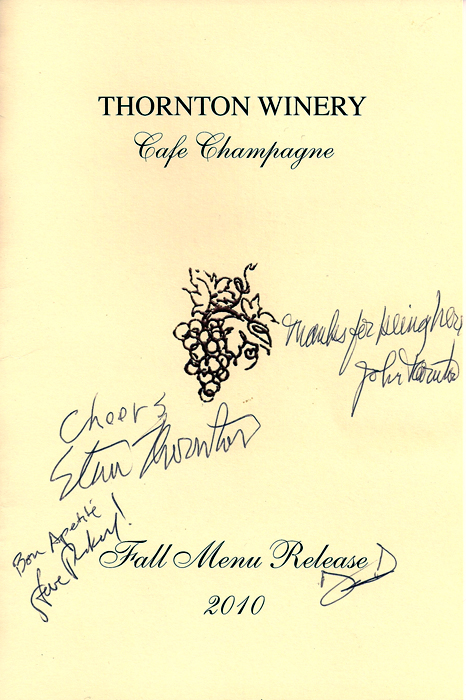 As Summer begins its transition into Fall, change is in the air at Temecula’s Thornton Winery. New winemaker David Vergari has joined the fold. The summer Champagne Jazz concert series has concluded its 22nd annual season. Finally, Executive Chef Steve Pickell has unveiled his Fall menu for 2010. John and Steve Thornton welcomed a small group into their wine cave to meet the players and taste Chef Steve’s new Fall fare. “It’s our belief that wine, food and music go very well together” said John Thornton. They strive to accomplish that harmony through the winery, restaurant and concert series working in unison. Son Steve adds, with tongue planted firmly in cheek,  “This is a fun place to work. I get to drink on the job.” He praises Chef Pickell for bringing Café Champagne to a Five Star level, noting he has been a part of the restaurant dating back to 1993. The change in the economy has dictated they work diligently to stay within diners’ budgets without sacrificing quality. Changing the menu with the seasons has been a tradition with the Thorntons, taking advantage of the bounty of fresh local produce within easy grasp. Joining a winery during harvest is nothing new for David Vergari. This is the third time he’s accepted a chance to lend his expertise to make improvements. “Nothing here was broken” says Vergari. “It’s my hope to simply make things better.”  It all begins in the vineyard, and if you don’t get it right there you’re not going to produce good wine. He is working hand in hand with vineyard management expert Ben Drake to assure the plants are in good shape. His familiarity with the Temecula Valley is years long. He worked at the Hess Collection in the Napa Valley with former Callaway assistant winemaker Tom Smith and met Steve Hagata, Joe Hart and Jon MacPherson when he began judging wine competitions a decade ago. Vergari says those relationships have allowed him to be welcomed here with open arms. Growing up near Korbel Winery in Sonoma County’s Russian River Valley, he’s been around wine all of his life and has made wine not only in North America, but in Australia and Europe as well. He ventured out on his own in 2003, but when the opportunity to work with Thornton Winery presented itself, the time was right. Steve Pickell has shared his impeccable gift for creating exquisite food at Thornton since 1993, taking a short break a few years ago before returning. He considers Thornton his second home and says he grew up with John and Steve. A San Diego native, Steve met John and Sally Thornton when he was working at the University Club.  He has worked in Washington, DC, studying under the legendary Nora Pouillon, a pioneer in the use of organic and sustainable ingredients. He also honed his craft in Chicago and San Francisco, working with Jeremiah Tower at Stars Restaurant. Pickell associates Fall with apples, pears, mushrooms, pork and more, and focuses on items that are either leaving or coming into season. Lunch began with a delicious Forest Mushroom Focaccia, available on the appetizer menu at lunch and dinner. Sautéed mushrooms were served over tomato herb focaccia with leeks, herbs and garlic and a truffle aioli. Paired with Thornton’s ’07 Estate Syrah, our luncheon was off to a great start. Next up was a Bosc Pear and Wild Arugula Salad available on the Fall lunch menu. David paired this dish with the ’09 Moscato, which complimented the crisp pancetta, Gorgonzola cheese and toasted hazelnut dressing splendidly. The main course, from the new dinner menu was a Spicy Sausage and Shrimp Linguini. Accompanied by the ’07 Sangiovese, this pasta dish shone with house made sausage, jumbo shrimp with roasted Roma tomatoes, zucchini, garlic and garden herbs and topped with shaved Parmesan. For the finale, Chef selected the Fresh Fig Tart with pistachio mousse and Zinfandel caramel sauce. The crust was light and flaky and the flavors worked wonderfully with the ’06 Late Harvest Zinfandel.

Most of the Thornton staff has been there for a decade or more, and their level of service and care is impeccable. Thornton Winery has been one of my top winery destinations in the Temecula Valley for more than a year now. This last visit has only solidified my position. Thornton Winery, 32575 Rancho California Rd., Temecula – (951) 699-0099