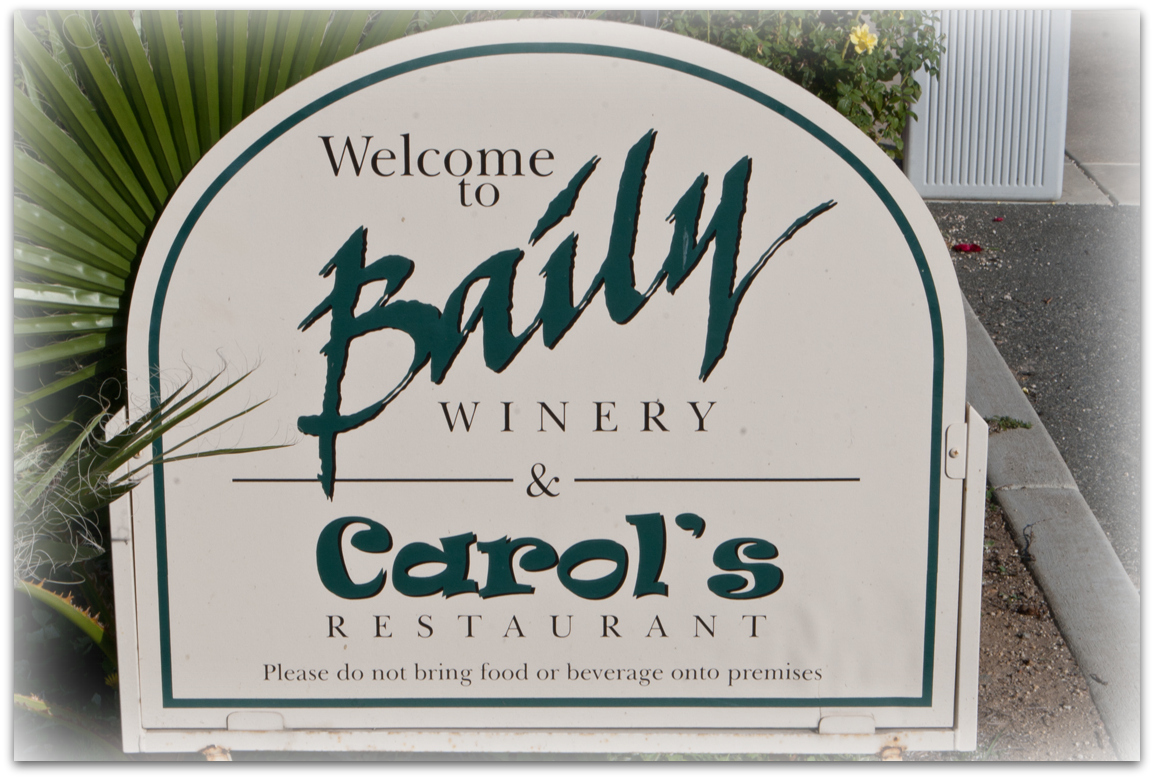 Phil Baily has been making wine in the Temecula Valley for more than 25 years. As you might imagine, he’s learned a thing or two and has seen some changes along the way. Phil and his wife Carol came to Temecula in 1981 to get away from the big city. At the time, There were no stoplights or supermarkets in Temecula and “definitely no Home Depot.”  He planted grapes the following year and opened Baily Vineyard & Winery in 1986.

Phil’s love affair with wine began early. He and Carol have been into wine their entire adult lives. In 1968 on their first wedding anniversary they spent a week visiting wineries in Northern California and back then he says, that was about enough time to see all of them. They began making wine at home and taking extension courses at U.C. Davis. Husband and wife both became involved in all aspects of the business of making wine. After opening the winery in 1986, Carol started turning her focus toward Carol’s Restaurant at Baily Winery. Their son Patrick works in the kitchen. Of all the wineries that were in operation when Phil opened for business in 1986, Hart is the only one other than Baily still under the same ownership. The others, including Callaway, Maurice Car’rie, Mt. Palomar and Filsinger have all changed hands. Although the town has grown tremendously and there are far more wineries than there were 25 years ago, Phil says the community doesn’t seem that different than it was.

“We’ve always been able to make wine here” he says. Phil feels there’s a certain amount of inconsistency due to the fact that it takes young winemakers a little time to hone their craft. “Hopefully you don’t make the same mistakes more than once.” He believes it takes 10 to 15 years to really figure it out. He’s been making his wines the same way for more than 10 years now, using the same fruit and the same type of barrels. Phil likes making a wine that he will enjoying drinking, and thinks that winemakers who cater to their clientele do them a disservice. A good gauge of how well he is making wine is that he drinks a lot more of his own wine now than he used to. Phil makes his wines strictly from estate fruit. He has 27 acres planted mostly to Bordeaux varietals: Cabernet Sauvignon, Cabernet Franc, Merlot, Malbec, Sauvignon Blanc, Semillon, Riesling and Sangiovese. His Bordeaux reds all spend 30 months in barrel and another few years in bottle before they’re released. The 2005 Meritage was just released a few weeks ago. He enjoys a smooth wine with a nice mouthfeel, not overly tannic and with a long finish. “Wine tastes better with food and food tastes better with wine” he says and adds he couldn’t imagine a dinner without wine.

I have enjoyed Baily Wines on several occasions and it’s clear to me that Phil is producing excellent wines in the Temecula Valley. I’m not crazy about his choice of synthetic enclosures, but I understand his reasoning. He doesn’t want any of his wines to suffer cork taint. I’m just a diehard natural cork fan. “The overall perception of Temecula is so much higher now than it was back then” he says. “We still have a long way to go.”