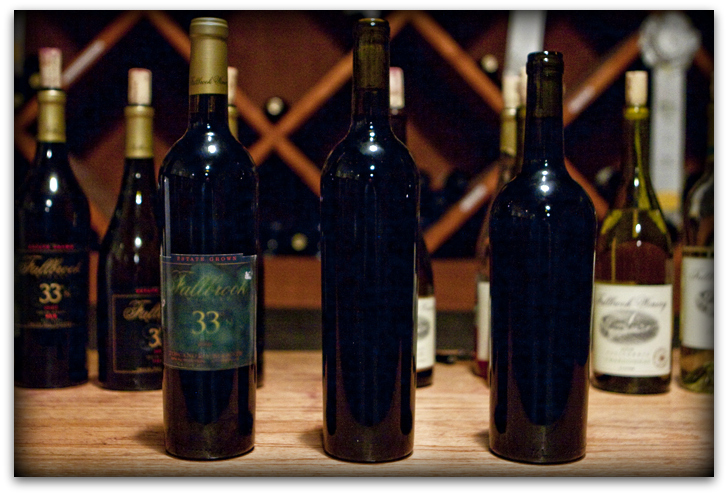 I recently got an email from Vernon Kindred, one of the two winemakers at Fallbrook Winery. They had just bottled some of their 2008 vintages and he was anxious to have me try them. I stopped by yesterday, visited with Vernon and owner Ira Gourvitz and tasted four new wines. There are some tasty treats heading your way.

As you’ll notice in the photo to the left, these wines haven’t been labeled yet. They’re not likely to be released until sometime this fall. We started with the Estate Merlot. This is a big Merlot. All the wines were slightly tight, having just been bottled and just been opened. The Merlot displayed a beautiful nose and color and a great tannic structure. This isn’t a wimpy Merlot by any stretch of the imagination.  By the time it’s released, I expect it to have settled down in the bottle and be a real winner.

The Estate Sangiovese had a bright acidity, nice deep color for a Sangiovese, a great nose and a soft finish. Next we tasted the Estate Tuscan blend, as yet unnamed but two of the candidates are “Vino Dalla Collina” and “Grazie”. It’s a 70/30 Sangiovese/Merlot blend and will be a new addition to the Fallbrook Winery lineup. Again, a wonderful fruit forward wine, beautifully balanced.

Their flagship wine is BDX, the barrel code for Bordeaux. This year’s blend is Merlot, Cabernet Sauvignon, Malbec, Cabernet Franc and Petit Verdot in that order. I enjoyed the three previous wines immensely, but this one stole the show. Out of curiosity, I opened a bottle of ’07 BDX at home and did a side by side tasting. The ’07 has had more time to settle in and it shows, but the promise of the ’08 is tremendous. I can’t wait to taste it again six months from now.

All four wines were aged in new French oak and are unfined. The  BDX was lightly filtered. If you haven’t paid a visit to Fallbrook Winery, I highly recommend it. They are open by appointment only, so call ahead – (760) 728-0156.