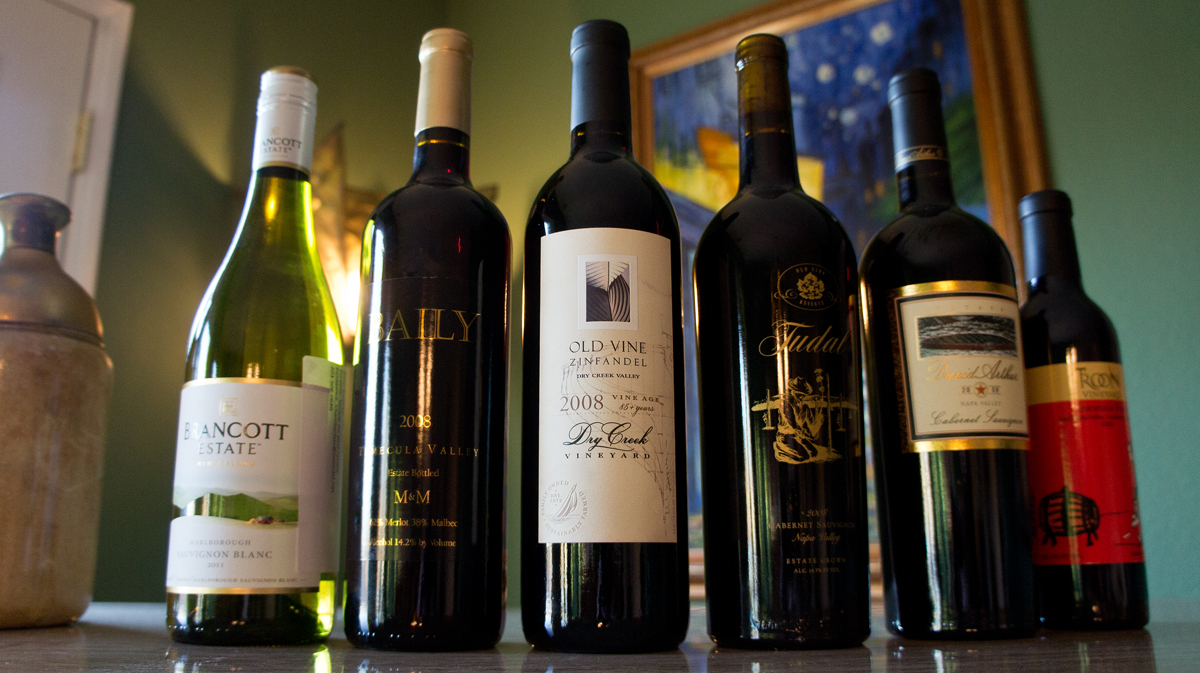 Another Round – Tasting Wine With Friends One of the perks of being a wine writer, and there are several, is sharing wine with friends. We gather together, eat a bit, drink a bit, share our reactions and laugh a bit. For a few hours time is suspended. We pulled the corks on another six wines recently and here’s what we thought.

We began with Brancott Estate’s 2011 Sauvignon Blanc from Marlborough, New Zealand. There seems to be a clear line in the sand on Marlborough Sauvignon Blanc: Either you love them or can’t stand them. I’m in the former camp and really loved this wine. It had a pronounced nose with plenty of white grapefruit. A few found it slightly effervescent. Others commented on its crispness and balance and felt it was food friendly. At $10, all of us would buy it. This wine is an excellent value.

I had seen Phil Baily earlier and he sent me off with a bottle of his Baily Winery 2008 M & M, 60% Merlot/40% Malbec blend. Tony wasn’t shy with his opinion: “Super great nose! Awesome taste! Drinks like a $100 bottle.” A few others felt it would pair well with a pasta with red sauce. Everyone loved the nose. At $19.95 the decision was unanimous. All of us would buy it.

We moved on to Dry Creek Vineyard’s 2008 Zinfandel and got mixed reactions. A few of us liked the nose, but most felt it was non-descript. One taster thought the finish dropped off too quickly. Only one of us felt it was worth the $25 price tag.

We moved on to the first of two Napa Valley Cabs. Tudal Winery’s 2008 Cabernet Sauvignon was met with mostly favorable reactions from our group. I liked its soft, perfume-like nose. A few saw its aging potential, but agreed it’s drinking beautifully now. Most thought it was well balanced and displayed true Cabernet characteristics. We split as to whether or not we would pay the suggested $55 retail, with about half thinking it was a bit overpriced and the others thinking it was well worth it.

Our second Cab was David Arthur‘s 2008 Cabernet Sauvignon: 84% Cabernet Sauvignon, 11% Petite Verdot and 5% Cabernet Franc. Only 471 cases were produced. At $95, we were nearly unanimous in feeling it was a bit overpriced. Most of us are Cab drinkers and we all enjoyed it, finding it well balanced with a good expression of fruit and well integrated tannins. The group thought it would age well, but were resistant to the $95 price tag.

We ended our get together with Troon Vineyard’s 2009 Insomnia Port. Unfortunately none of us felt it was worth the $23 asking price. One felt it wasn’t rich enough. Another picked up volatile acidity on the nose. Another simply said “no comment.”

We’ll meet again with more wines to taste and more opinions to share. Thanks for sitting in with us.