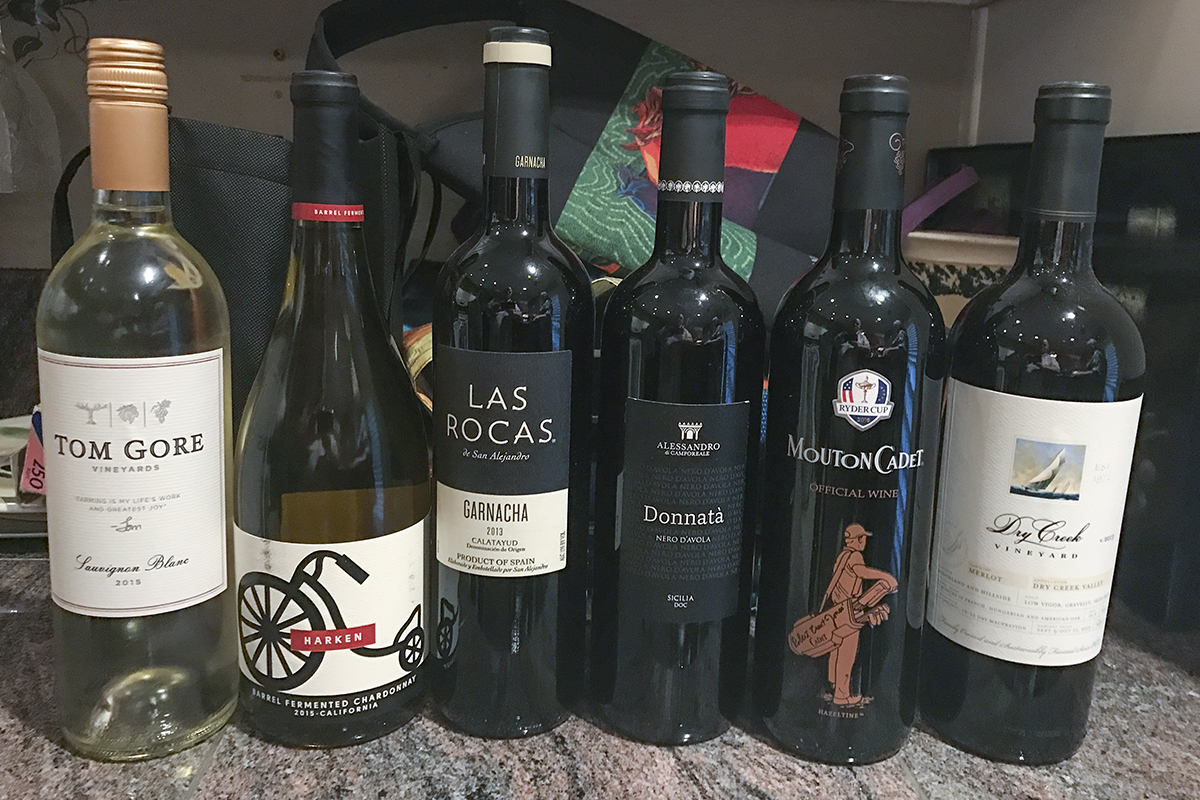 Big surprise, I know. Once again I rallied the troops and they responded in spades! We had a full house at Ken and Taryn’s with food and wine galore.

We kicked off the evening with the 2015 Sauvignon Blanc from Tom Gore Vineyards in Sonoma. Tom calls himself a farmer and is a firm believer in getting it right in the vineyard. Kim called it bright and “zippy.” I like the soft, tropical nose and found it well-balanced. Tony called it a great value for the $13 price. It scored an average of three and a half out of a possible five stars.

Our next wine came with a View-Master. Remember those? You put in a little picture wheel and click to scroll through 3-D images. The makers point with Harken is to bring back the days of toasty, buttery Chardonnay. The 2015 barrel fermented Chardonnay is 100% barrel fermented, went through malolactic fermentation and spent seven months in 80% American and 20% new French oak. Allison gave it a perfect five-star score. Sue found it a little too buttery. Ken liked the “wonderful” balance and liked the stone fruit notes. Brian called it “crude, but sexy.” At $15 it also averaged three and a half stars.

We tasted a Garnacha from Spain, the 2013 Las Rocas. Jim called it a good value for a well-made wine. Ken called it very drinkable and liked the $10 price tag. Tony also thought the price was right and recommended letting it sit in the glass for 30 minutes or so. Once again, another three and a half star score.

We moved to Italy for the 2014 Donnatà Nero D’Avola. Jean called it a food wine. Al liked the nose and said it was ok for the price. Judi said it was well-balanced with good varietal flavor, Sue called it rich and mellow. At $10, it scored close to three and three-quarters stars.

Golf’s Ryder Cup concluded recently, with team USA taking home top honors. We tasted the Mouton Cadet Ryder Cup wine from France. It’s a Bordeaux blend that Jean called very traditional and smooth. Tony said it was a nice bottle for $15. Judi called it the “best of the night” with a nice mouth feel. It scored nearly four stars.

Finally we spent a return visit to Sonoma for the 2013 Merlot from Dry Creek Vineyard. 85% Merlot with 10% Cabernet Sauvignon and 5% Cabernet Franc, it spent 17 months in French and Hungarian oak. Sue called it “so mellow.” Jim found it a bit tannic. I loved its lingering finish and called it the perfect Merlot. Tony said “Dry Creek is always a winner.” At $24 it scored nearly four stars.