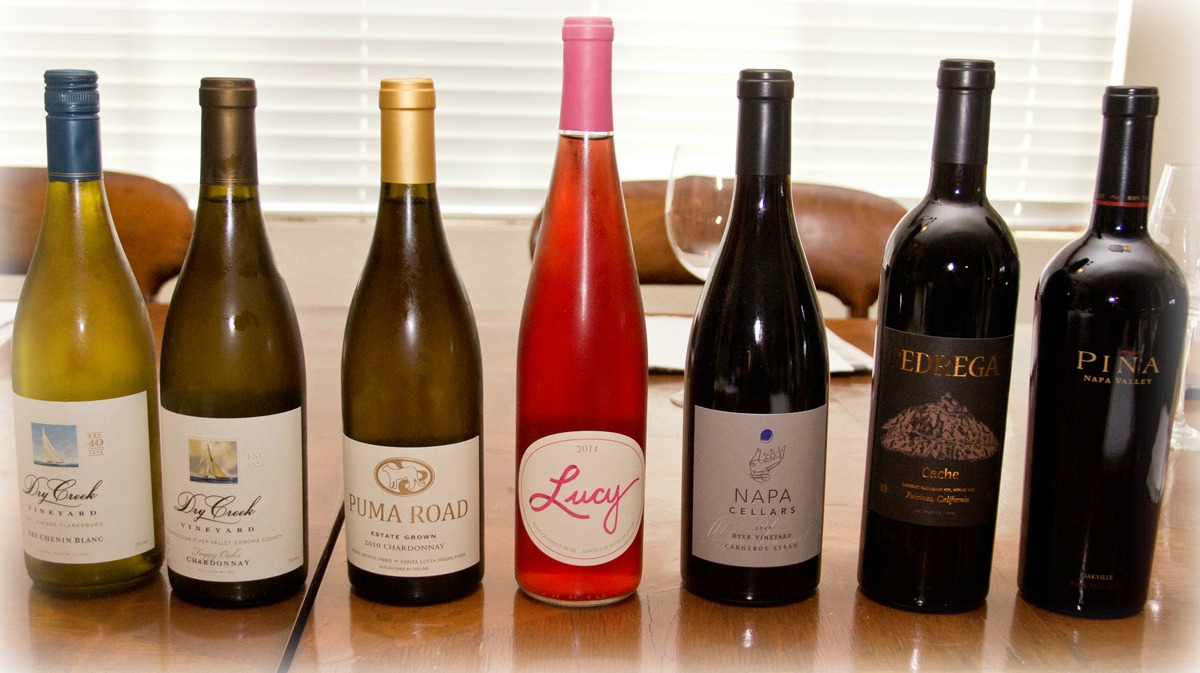 Our intrepid, irregular group of wine lovers gathered not too long ago at my house to taste seven wines from three regions. As always we enjoyed a little food and a lot of conversation and I’ll share our findings with you. We began the afternoon with two wines from Dry Creek Vineyard. First was the 2011 Dry Chenin Blanc. I think this is a lovely, often overlooked varietal and I loved this one. At a low 12% alcohol and priced at just $12, this one’s a winner! Pineapple and tropical fruits dominate the nose and this fruit driven wine with crisp acidity was a palate pleaser. Richard rated it four out of a possible five points and liked its crispness and lingering finish.Amy loved the mouthfeel and slightly sweet finish and thought it paired beautifully with goat cheese and honey. Mark enjoyed it, too and said he’d like to keep a bottle or two on hand. With only a few exceptions, it was a hit with the group. We moved on to DCV’s 2009 Foggy Oaks Chardonnay. As a whole the group found this to be lacking in flavor and feel for a Chardonnay. Thin, watery and flat were common comments. Amy called it non-memorable. We all felt it was overpriced at $20.

“Lucy” is Lucia Vineyards 2011 Rosé of Pinot Noir and the first thing that grabs your attention is its spectacular color. The fruit really shines in this wine and the balance was spot on. Stacey called it “unexpectedly nice” and liked its depth. Jan said she wouldn’t have known it was a rosé if she hadn’t seen the color. Jack and Sue simply said it was perfect. Priced at $19, I found this to be a great value. Puma Road is part of the Ray Franscioni family of wines and we tasted the 2010 gold capsule Chardonnay. Richard thought the nose was fabulous and liked that it wasn’t overly oaky. I thought it had a wonderful floral nose, apple on the palate, good balance and a long finish. Mark liked the nose and picked up apple as well. He thought it would pair well with shellfish. Most of the panel enjoyed this offering and would be willing to pay the suggested $27 for it. Our final wine from the Santa Lucia Highlands also came from Ray Franscioni, the 2006 “Cache”, a Cabernet/Merlot blend. Jan loved the nose, but found it a bit raisiny as did a few others. Richard thought it was “absolutely wonderful” and liked the earthiness and sweet fruits on the back of the palate. I picked up a bit of raisin, too, but enjoyed the finish the Merlot gave it. About half the group said they would buy it, but would drink it now. Suggested retail is $27. We finished our California tasting with two Napa Valley wines. From Napa Cellars we tasted the 2009 Dyer Vineyard Carneros Syrah. “From the first sip it’s a wow!” said Tony. He found it excellent from start to finish and rated it 5 out of 5. John said “I would like more, please.” He liked the smoke on the nose and mellow spice on the palate. I thought this was a great example of the varietal, and loved its smoky nose. It’s a fruit driven wine with plum and pepper on the tongue. Jan thought it was very smooth and well balanced. Everyone felt it was well priced at $28 and wouldn’t hesitate to buy it. We saved the best for last, the 2009 Oakville Cabernet Sauvignon from Piña Napa Valley. Weighing in at 15% alcohol, this is a serious wine. Jack and Sue said simply “wow.” John said it was just a great Cab and when asked if he would buy it said absolutely. Amy rated it a 5 on all pints: nose, flavor, mouthfeel and finish. Jake liked the bramble fruit and mild tannins and thinks it will be even better in two to five years. None of us would have a problem paying $85 for it.