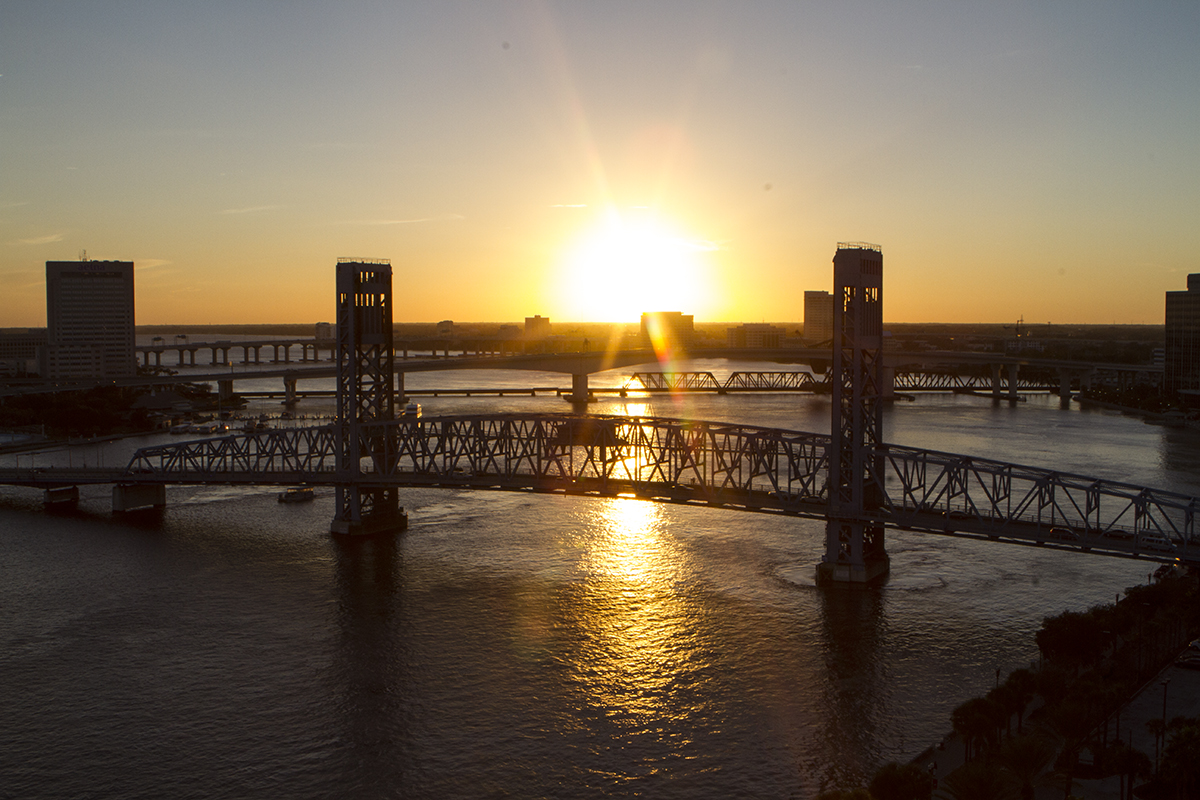 The Jacksonville International Airport is becoming quite familiar territory for me. In 2012 alone I flew in and out of there three times. My last trip of 2013 was to Jacksonville, with an opportunity to actually visit this amazing city. I learned on the ride from the airport that this is the largest city in size in the United States at nearly 840 square miles. After checking into the modern and beautiful Hyatt Regency Riverfront, we left to explore the historic San Marco district. San Marco is a hub of good food and wine, but as we soon discovered there’s outstanding food to be had nearly everywhere in Jacksonville. You don’t have to look far to see spectacular million dollar homes on the river. Our evening began with wine tasting and light hors d’oeuvres at The Grotto. Stuffed Peppadew peppers, a bruschetta trio and an assortment of cheeses were paired with Picpoul de Pinet, Santa Julia Torrontes, Bel Glos Las Alturas Pinot Noir (a favorite) and Molly Dooker Blue Eyed Boy. Scott, Cory and Mitch made us feel right at home. The Grotto has an exceptional selection of wines and has been in business for 13 years now. We strolled a few blocks to Taverna for a few more bites and a bit more wine. Executive Chef and proprietor Sam Efron opened Taverna four years ago with wife and wine director Kiley.  They served us a few tasty treats; house made lamb meatballs with ratatouille and pasta as well as agnolotti accompanied by a couple of wines, most notably a Falanghina del Sannio, Argiolas ‘Perdera’ and Monica di Sardegna both from Sardinia. They were preparing for an expansion which should be complete as of this writing. Sam has 26 years in the restaurant business and an excellent knowledge of wine having worked for Kendall Jackson. Taverna is warm, cozy and charming and their food is delicious. We concluded our culinary extravaganza at Bistro Aix, a Jacksonville fixture for more than 15 years. For starters it smelled heavenly. We were welcomed with some bubbly wine and then presented with their sensational menu. Just take a peek at it to see why making a choice was so very difficult. Our host convinced me that the grilled tuna was what I should order and I am so happy I did. Saying a dish was the best I have ever had is a bold statement, but this was hands down the tastiest tuna I have ever eaten. Moist, tender and flavorful, I savored every last bite. The wine pairing was a 2010 Stuhlmuller Alexander Valley Cabernet Sauvignon and it went surprisingly well with the tuna. After dinner we walked through the restaurant to ‘Le Bar’ to sample a few of their signature cocktails and sample some of their small plates. Although I didn’t see how I could manage one more bite, I tried their slider and was very impressed by the wonderful combination of tastes. I would recommend Bistro Aix to anyone with my highest recommendation. Executive Chef Ezekiel Mears is very much at home in his kitchen. His philosophy is to “take simple things and make them the highest quality we can.” Stuffing Waffle with Mashed Potatoes and Gravy, Turkey and Gravy

The next morning I strolled along the riverfront and walked around Jacksonville Landing. It was a bright, sunny day with just a touch of crispness in the air. Our small group boarded a bus and headed for Metro Diner. The diner opened in 1992, and Mark Davoli took the business over in 2000 when things were on the downswing. A Pittsburgh native, Mark has spent most of his life in Jacksonville and fell in love with the Metro, its open kitchen, charm and the building itself. He offers what he calls ‘diner food’, basic food with fresh ingredients. They offer daily specials featured on a blackboard. Metro favorites got their start as blackboard specials. Fried chicken and waffles is their best seller. Mark tried out a brand new special on us. With Thanksgiving approaching he gave us a waffle made from stuffing with mashed potatoes and gravy, turkey and cranberry sauce. With four locations now they serve about 800 people breakfast and lunch daily. I can guarantee you won’t leave hungry. He gets his inspiration from ‘seeing things and making them your own.’ He considers it a compliment when people ask him for a recipe. Metro Diner serves what Mark calls ‘a full plate of food.’ Very much a family business, Mark’s brother and father both work with him and until recently his mom did, too. You may have seen Metro Diner on Diners, Drive-ins and Dives. A walk was most definitely in order after that gargantuan breakfast and we met with Gary Sass from Ad Lib Tours, dressed like Andrew Jackson, the man whose name the city bears. Gary showed us some of the city’s highlights including stops at the wildly successful Peterbrooke Chocolatier, the  Treaty Oak, the Times-Union Center, home of the Jacksonville Symphony, the top of the Bank of America building for a panoramic city view and the historic and gorgeous Florida Theatre. For lunch we stopped at Pele’s Wood Fire, where managing partner Matt Tierney greeted us with small bites paired with tasters of beer from their selection of 50 on tap and a few select wines. Matt spent six years on the big Island of Hawaii, where Madam Pele is the goddess of fire. He made a promise to Pele that if he opened a restaurant it would bear her name.  Pele’s opened at the beginning of 2012. The menu is constantly evolving with a focus on fish. They have a wonderful selection of salads and paninis. We started with a Margherita pizza and then enjoyed a red and golden beets salad, flambéed mussels, crab cakes, gnocchi ox tail ragout and finished with an assortment of desserts. When a customers asks if something can be done, Matt’s reply is ‘the answer is yes. What’s the question?’ Our next stop was the Cummer Museum of Art & Gardens. The largest fine arts museum in Northeast Florida, located in the Riverside historic district, The Cummer is home to almost 5,000 American and European masterworks. Time only permitted us to view about four exhibits, but The Cummer features work from Norman Rockwell, Andy Warhol and Peter Paul Rubens to name just a few. Behind the museum is more than an acre and a half of  formal gardens as well as the giant Cummer Oak. You can also relax and enjoy a bit to eat in The Café. It was time to play a little bit so we stopped by Sweet Pete’s. Peter Behringer’s mother founded the aforementioned Peterbrooke Chocolatier and he’s been around candy and chocolate since he was 14. Peter runs the shop with his wife and it’s clear he’s passionate about what he does. We tasted several delectable chocolates and candies and then got to take a turn making candy canes. Peter made it look easy, but it’s far from it. You need to make sure the spun sugar isn’t too warm or too cool. Speed is of the essence. Sweet Pete’s has almost any candy you can imagine and a large selection of gluten-free items. For dinner we headed for Five Corners and the recently opened Black Sheep. I had lunch there when they had just opened and it was nice to see the rooftop with its incredible city view now open since my last visit. Managing Partner Allan Devault shared their passion for all things fresh. They raise their own chickens and work hand in hand with local farmers. The menu changes seasonally with small changes every few months. We had an assortment of favorites including to die for macaroni and cheese, crispy skin salmon, braised beef shortribs and wild mushroom and blue cheese bread pudding. The food is outstanding and the wine list is very well thought out. Our meal pared nicely with a Letitia Pinot Noir.

Our first full day had come to a close. We were barely getting started.