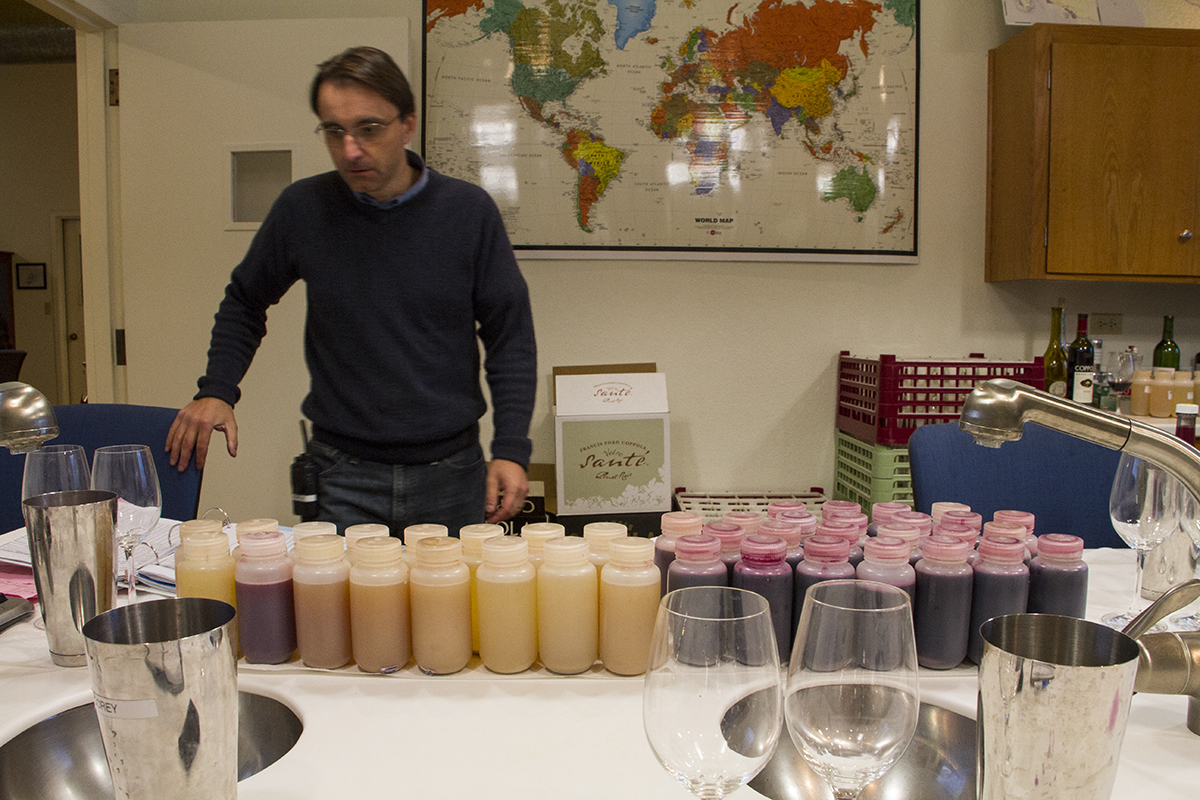 Heaven Condensed – A Slogan That Fits Sonoma To a T The slogan for Sonoma Wine Country is Heaven Condensed. I can’t think of a more perfect description. I recently spent three days in Sonoma County, starting with a stay at the Geyserville Inn in Geyserville. Justin Hayman just took over as General Manager having previously worked in management at Santa Rosa’s Fountaingrove Inn. The potential he sees at the inn excites him. As he told me, “you can throw a paper airplane from your room to a vineyard” and he wasn’t exaggerating. The views are spectacular, the rooms are comfortable and well-appointed and major renovations for both the Inn and the Hoffman House restaurant next door are about to get underway. The town’s center is just a few short blocks away, so I choose Catelli’s for a quick bite before turning in. A small salad and a cup of homemade soup with a glass of wine did the trick. I went to bed ready to start the day early with a visit to Francis Ford Coppola Winery. Winemaker and General Manager Corey Beck invited me to meet him in the lab at 10am. Finding the lab was no small task, but once I did, I met Cory and four of his winemaking team as we prepared to taste about 40 samples from various tanks at different stages of fermentation. It’s something Corey and his team do every morning this time of year. In more than four years of visiting wineries and meeting with winemakers, this was the most fascinating experience I have ever had. Each tank is monitored by a software program that measures temperature at the tank’s top and bottom and tracks it, so the winemaker knows precisely what is happening in each one. Each sample we tasted was unfiltered, some with skins still in them, and they ranged from grape juice just beginning fermentation to wine nearly finished fermentating. Each team member made notes on the changes in brix since  last checked and other changes in the juice. After our tank tasting, Corey took me on a tour of the winery. Francis Ford Coppola had a very clear vision of what he wanted. He insisted there be a swimming pool with cabines, and there is now a magnificent pool that is jam-packed during the summer. When I asked Corey how many winemakers he had, he told me there were more lifeguards than winemakers. He wasn’t joking. He has a team of six winemakers. We went through the entire winemaking facility and up on a catwalk, he pointed out a tank of Zinfandel that was ready for punch down. Any punch down I have seen has been in a relatively small tank with punch down done by hand. This was a massive tank and Corey asked if I wanted to watch it in action. We finished the visit with an extensive tasting. Coppola wines are consistently very good and their price point is extremely reasonable. My next stop was at J Vineyards & Winery, where hospitality manager Lindsey Auchter welcomed me and gave me a tour of their gorgeous facility. It was the end of harvest and the last of the Pinot Noir grapes sat in bins on the crush pad. Lindsey ran downstairs to grab me a cluster and we made our way to J’s Bubble Room. Judy Jordan borrowed money from her dad to start the winery. She wanted to feature sparkling wines that represented a sense of terroir. She re-paid the loan as soon as she could so she could make the winery uniquely hers. Lindsey and I sat overlooking one of the bottling lines while we paired both still and sparking wines with cheese and charcuterie. J’s wines, the sparkling and Pinot Noir in particular, all show finesse and elegance. I also loved their Pinotage, a varietal you don’t often see outside of South Africa. It was a delightful tasting experience. I had one stop left for the afternoon. I met Bill Smart at Dry Creek Vineyard. He’s their Director of Marketing and Communications and it was a pleasure meeting a man I’ve known online finally in person. We headed straight for the barrel room for a tasting of their full line-up of wines. Winemaker Tim Bell joined us halfway through. He’s been with DCV since 2011 and is carrying on the tradition of making exceptional wines. After tasting Tim took me out back and showed me their tanks and offered me a few tank samples. It was a perfect way to wrap up a gorgeous autumn afternoon. I headed back to downtown Healdsburg and checked into the charming Grape Leaf Inn, my home for the next two nights. The Wilson family, who own several Sonoma Valley wineries, also own this lovely Victorian. The next day, I visited three of their wineries, Matrix, Pezzi-King and Soda Rock. That story will follow soon.