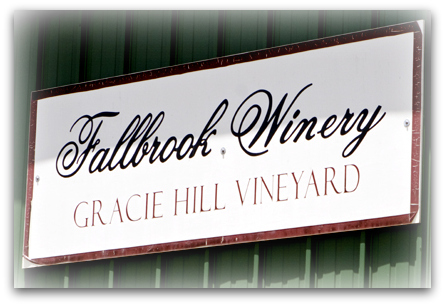 One of the things I love about visiting Fallbrook Winery is the pace. No one is in a hurry. It’s open by appointment only, so chances are pretty good you won’t be running into any crowds. In February, I stood at the tasting room bar with owner Ira Gourvitz  and winemakers Duncan Williams and Vernon Kindred as we tasted some new and older releases along with tank and barrel samples. All three were smiling broadly and with good reason. Fallbrook Winery has been gaining some much deserved recognition lately. They’ve picked up nine medals this year alone including Platinum and Best of Show white for the 2010 Sauvignon Blanc Reserve at the Winemaker Challenge International Wine Competition in San Diego.

The winery is nestled on 36 acres in a hidden corner of Fallbrook. The grapes there are thriving. Vineyard manager Jake Ruhe oversees Sangiovese, Cabernet Sauvignon, Cabernet Franc, Merlot, Malbec, Petit Verdot, Syrah and Petite Sirah. 15 acres are planted to grapes on the property with roughly another 25 planted nearby. With nearly a decade of growth on many of the vines, the fruit they are producing is improving every year. Fallbrook’s climate and soil provide exceptional condition for growing grapes. As the old adage goes, you can’t make good wine from poor fruit. Fallbrook Winery is very much a family affair. Ira and his wife Pepper overlook their winery from a home they just occupied last year. Son Ted is the General Manager. Duncan and Vern might as well be family, they’re so much at home there. I asked about future plans and in addition to continuing to produce quality wines, they plan to produce more estate fruit and increase their 33° North estate label from its current production of 800 – 1000 cases annually to nearly 3000. They will also soon be releasing their first wine with a $50 price tag, the Dalla Collina Sangiovese/Merlot blend slated for an early May release. Ira is also eagerly anticipating the forthcoming AVA designation: Mission San Luis Rey. We adjourned to the deck under the shade of avocado trees and ate sandwiches and enjoyed more of Fallbrook Winery’s tasty offerings. Before writing this story, I opened both a bottle of 2010 Sauvignon Blanc and 2008 Sangiovese from the winery and found them every bit as good as I remembered them.

Next time you have a few hours, pick up the phone and make an appointment to visit Fallbrook Winery. You’ll be hard pressed to find a warmer welcome.  (760) 728-0156