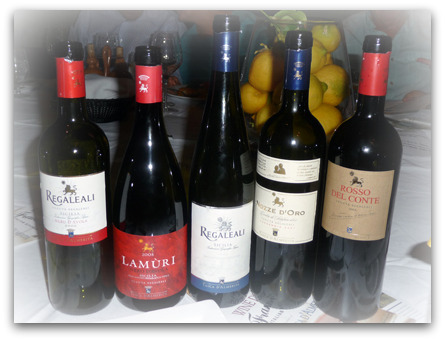 Alessio and Francesca Di Sabatino have been bringing in some incredible winemakers to Francesca’s lately. It’s been their good fortune that Wine Spectator has been holding their 2009 Grand Tour, bringing more than 200 of the world’s finest winemakers on a three city tour.

Lilly LoCascio from Tasca d’Almerita was the special guest last night for a wine dinner featuring five of her wines with Francesca’s exquisite food. Lilly is a charming woman, who told us about Sicily and their 1200 acre property in the middle of the island. The winery dates back to the 19th century and is also host to a cooking school.

Lilly shared five wines with us last night, beginning with the Regaleali Bianco, a blend of three Sicilian white grapes – Inzolia, Catarotto and Grecanico. This was a lovely dry, crisp wine. That was followed by the Nozze d’Oro Contea di Sclafani (Golden Wedding Anniversary), a blend of Inzolia and Sauvignon Tasca. This was an excellent white with a great nose and plenty of fruit.

The whites were paired with Lattuga Romana, grilled romaine lettuce with ham and Fontina in a light cream sauce. After that it was Fettuccine Con Pesce with clams, mussels and shrimp in a marinara sauce.

The reds were up next, beginning with Regaleali Nero d’Avola, a 100% Nero d’Avola, a Sicilian varietal, followed by the Lamuri Nero d’Avola, from 10 to 15 year old vines. Both wines showed lots of character, with berries and vanilla on the nose and soft tannins.

I chose the lamb chops in a cherry wine rosemary sauce for my entree while Laura had wild salmon picatta, with lemon and capers in white wine.

Lilly saved the best for last, opening a Rosso del Conte Contea di Sclafani, a blend of Nero d’Avola and Perricone. This was a show stopper, with a deep ruby color, some cherry on the nose and a velvet finish.

For dessert we had cannoli and tiramisu. This was another outstanding evening at Francesca’s. We look forward to our next experience there. The Wines of Tasca d'Almerita