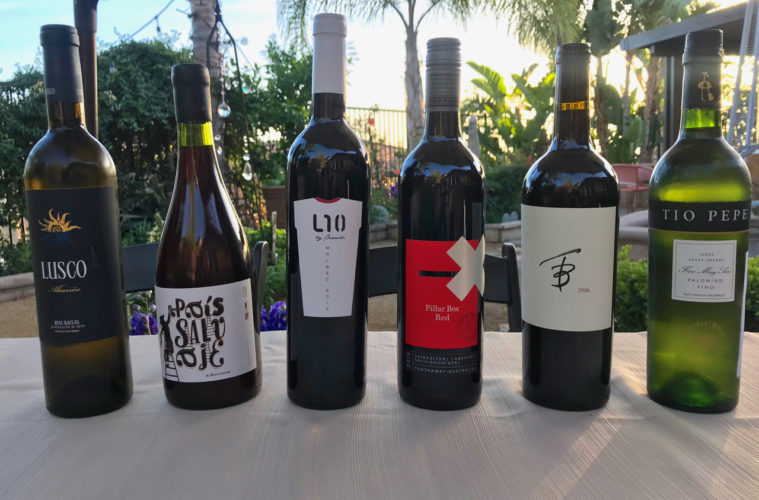 Wine Tasting Around The World

Wanda and Scott were gracious hosts in April as we gathered for a global wine tasting event. As always, delicious food was plentiful. We limbered up our palates and set out for the task at hand. We began our journey in Spain with the 2016 Pazos de Lusco Albariñ0. Brandon felt it was a bit too dry, but he loved its finish. Scott simply called it excellent. Dena enjoyed the floral nose and called it smooth and nice.  Mike said it was light and easy to drink. Kim enjoyed the notes of pineapple and mango. Ken called it “nice and snappy” and felt it should be served really chilled. At 13% alcohol, our group gave it better than four out of a possible five stars. It sells for around $24.

Our next wine took us to the Southern hemisphere, the 2017 Pais Salvaje from Chile. Pais is an ancient grape that until very recently was the most planted wine grape in Chile. Lisa loved the nose, but thought it was slightly bitter. Kim liked the nose and pale color, but also found it somewhat bitter. Brandon, however, said “This is perfect!!! Prefer my wines lighter.” At $20, it barely scored three stars. If you want to try something unique, you may want to give it a shot.

From Chile we made our way to Argentina for L10’s 2017 Malbec. If that strikes as young, keep in mind that south of the equator seasons are reversed, so the grapes were actually harvested in early 2017. Scott called it good and easy drinking. Dena found hints of strawberry and called it fruity with a lasting finish. Mike got cherry on the nose. Brandon felt it would develop over time. It scored a sold four stars and is priced at $16.

We remained south of the equator, but made our way halfway around the world to Australia for 2016 Pillar Box Red from Henry’s Drive. A blend of Shiraz and Cabernet Sauvignon, Kathy liked its deep color and Liz enjoyed the finish. Mike liked the long finish and thought at $15 it was a bargain. Ken loved the perfume on the nose, while Brandon said “there’s nothing going on with this wine.”

I met Taylor Berkley Boydstun at the Family Winemakers of California event earlier this year and was impressed by his enthusiasm and his wines. We tasted his T. Berkley 2016 Cabernet Franc. Kim called it smooth and “yummy… a beautiful wine.” I loved the chocolate cherry nose and found it quite well-balanced. Lisa enjoyed its nose and smooth long finish. Brian felt it needed more time in bottle. It was Ken’s favorite of the night. Mike and Dena both enjoyed it, but found the $64 price tag a bit high. It scored a hair over four stars.

We ended our wine journey back where it began: in Spain. I knew that Sherry was going to draw a reaction and it certainly did.  Too Pepe’s Palomino Fino Sherry was our final taste. Brian called it a great Sherry. I picked up golden delicious apples on the nose. It was bone dry with a licorice finish. Kim, however, said it was for “little old English ladies. No – no – no.” Ken also enjoyed the apple nose and anise finish. Mike called the nose “terrible” and said “I can’t sip it at all.” At $19 they either loved it or hated it and it scored a little better than three and a half stars.