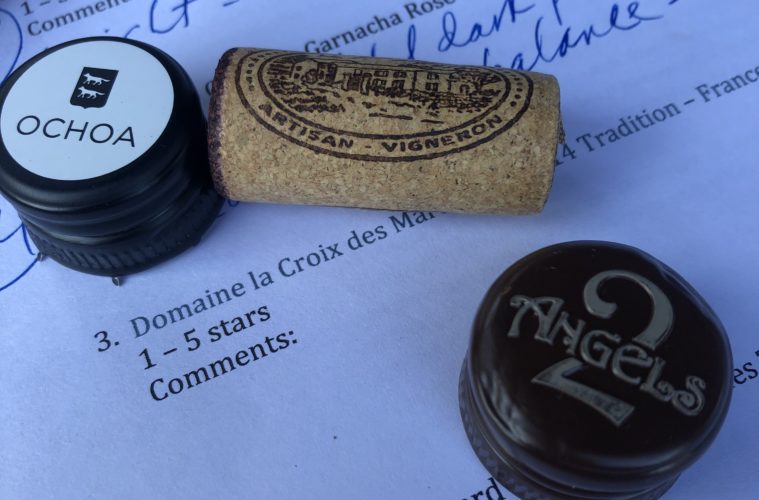 Wine Tasting and Bubbles, Too! When I bring bubbles to a wine tasting, I like to either begin or end with them. When the bubbles are from Moët & Chandon, I find it’s a perfect way to put an exclamation point on the night. Ken and Taryn were our hosts for a fun evening in June. The heat of the Temecula summer hadn’t hit quite yet, so we enjoyed a lovely cool visit on the patio.

We began with a Lake County wine, Two Angels 2018 High Valley Sauvignon Blanc. From a 2,000-foot elevation vineyard, Don called it “killer!” He said it was fragrant and fruity, nice and dry. Jan found it very refreshing, calling it nice and crisp and dry. Crisp was the adjective most often used, with David saying it was well worth the $17 cost. It scored better than four out of a possible five stars.

Rosé is built for summer and we tasted the Ochoa 2018 Calendas Garnacha Rosé. I loved its beautiful dark pink color, fragrant nose, and long finish. David said it was very easy drinking. Ken called the nose wonderful and was surprised by how dry it was. Jan called it dry and refreshing. At $13, it scored nearly four stars.

We moved to the Gaillac region in the south-west of France for Domaine la Croix des Marchands 2014 Traditions. David said it was earthy and made to drink early. Ken found hints of sour cherry on the nose and thought it was very balanced. Jan called it easy drinking. It sells for $14 and our panel scored it three and a half stars.

We moved on the Dry Creek Vineyards 2017 Heritage Vines Zinfandel. Don loved the color and described it as fruit-forward. David commented on its dark ruby color and enjoyed its nice even finish. This is an extremely food-friendly wine. It received more than four stars and it sells for $26.

We went down under for the 2017 Henry’s Drive Shiraz from Vintage Longbottom. 100% Shiraz, Jan liked its balance and finish. Ken called the nose “fabulous” and said it was really nice and smooth with a great finish. I couldn’t stop smelling it. I loved its round mouthfeel and picked up leather and black licorice on the palate. At $60, it received better than four stars from the group. As promised, we ended with bubbles, Moët & Chandon’s Grand Vintage 2012. A blend of Chardonnay, Pinot Noir and Meunier, wine  David thought it smelled like a bakery, creamy, nutty and elegant on the palate. I called it “magic.” Ken said “wonderful all the way from the nose to the throat. Absolutely delightful.” It scored four and a half stars and sells for $75.

Tom Plant launched WINEormous in 2009 and is a member of the International Food Wine and Travel Writers Association. Based in Temecula, California, he offers intimate winery tours for no more than seven people. Tour details and pricing are available at www.temecula-tours.com. WINEormous is the recipient of the Luxury Travel Guide’s Wine Tour Operator of the Year award for Temecula 2017 and 2018 and the Lux Life Mag Best Customised Wine Tour Operator Temecula for 2019 as well as Most Unique Wine Tour Operator – Southern California. Call now to book your Temecula Winery Tour at (951) 907-9701. Ask about special discounts.