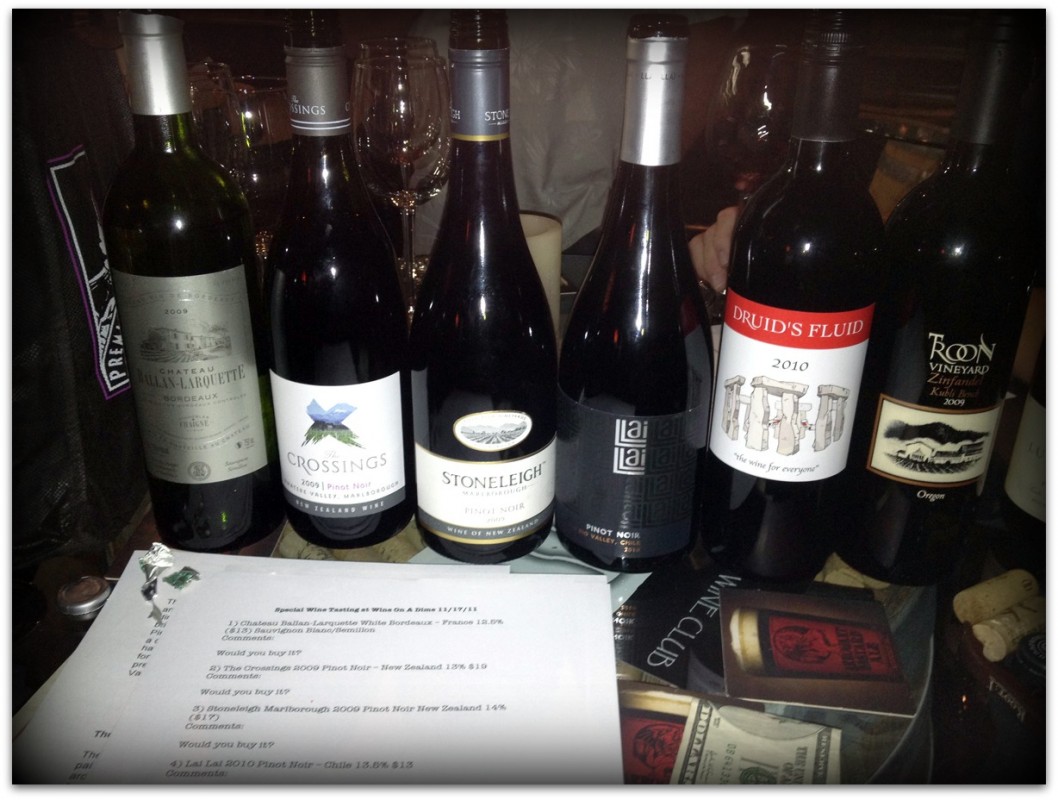 We Meet Again at Wine On A Dime Our intrepid wine tasting crew met again last week, this time at Temecula’s Wine On A Dime. Don and Michelle Campini made us feel right at home and had a table with glasses all set for us when we arrived. We had another six wines to taste and we started with a white Bordeaux, the 2009 Chateau Ballan-Larquette. A 50/50 blend of Sauvignon Blanc and Semillon, this was was 12.5% ABV. Ken called it a “classic white Bordeaux” and liked its minerality. New to the group, Scott found it “nice, crisp and clean” and felt it would be well suited to Thanksgiving dinner. Jake liked the balance and felt it was a “good sipper.”. I liked it, too, enjoying the soft nose and good balance. At $13, all of us said we would buy it.

We moved on to the first of three Pinot Noirs. With Thanksgiving rapidly approaching, many of us will have Pinot at the dinner table. First up was a 2009 offering from New Zealand: The Crossings. I was struck by the pale color and wowed by the nose and the fruit. Scott thought it was very smooth. Ken found it reminiscent of an Oregon Pinot, liked the nose and thought it was a little light. Jake enjoyed the classic Pinot nose and found no flaws. At $19, it was again unanimous, we would all buy this wine. 13% ABV.

Wine number three was the 2009 Stoneleigh Marlborough Pinot Noir also from New Zealand. Jake thought it was “flavorless” and overly tannic. Ken didn’t think there was much nose and that the tannins were weak. Scott thought it was okay, but liked The Crossings better. I liked the strawberry nose as well as the mouth feel. At $17, I would buy it, Scott said he might and Jake and Ken would not buy it. ABV was 14%.

Our fourth wine and third Pinot was the 201 Llai Llai from Chile weighing in at 13.5% ABV. Jake liked the nose, but found no pronounced flavor. Ken thought it was a good Pinot with red cherry notes. I was put off by the petroleum on the nose. Scott felt it was tight. None would buy it at $13, but Scott conceded he might if all he had was $13.

We tasted two more wines from Troon Vineyard in Southern Oregon. The 2010 Druid’s Fluid is a blend of Merlot, Syrah, Cabernet Sauvignon and Zinfandel. I thought there wasn’t much nose and it was too sweet for my palate. Ken called it a “typical fruit bomb.” Scott, too, found it very sweet but thought it might work as a dessert wine. Jake thought it might be better chilled and wouldn’t mind having it available for company with a sweeter palate. The suggested retail is $18. None of us would buy it.

The final wine was Troon’s 2009 Kubli Bench Zinfandel, 14.5% ABV. Jake liked the nose but felt the finish was disappointing. Ken said it “doesn’t have the backbone I associate with Zin.” Scott didn’t feel it measured up to California Zins and I thought the nose was musty. Neither Ken, Scott or I would spend the suggested $24 for it. Jake thought he might spend $15 for it.