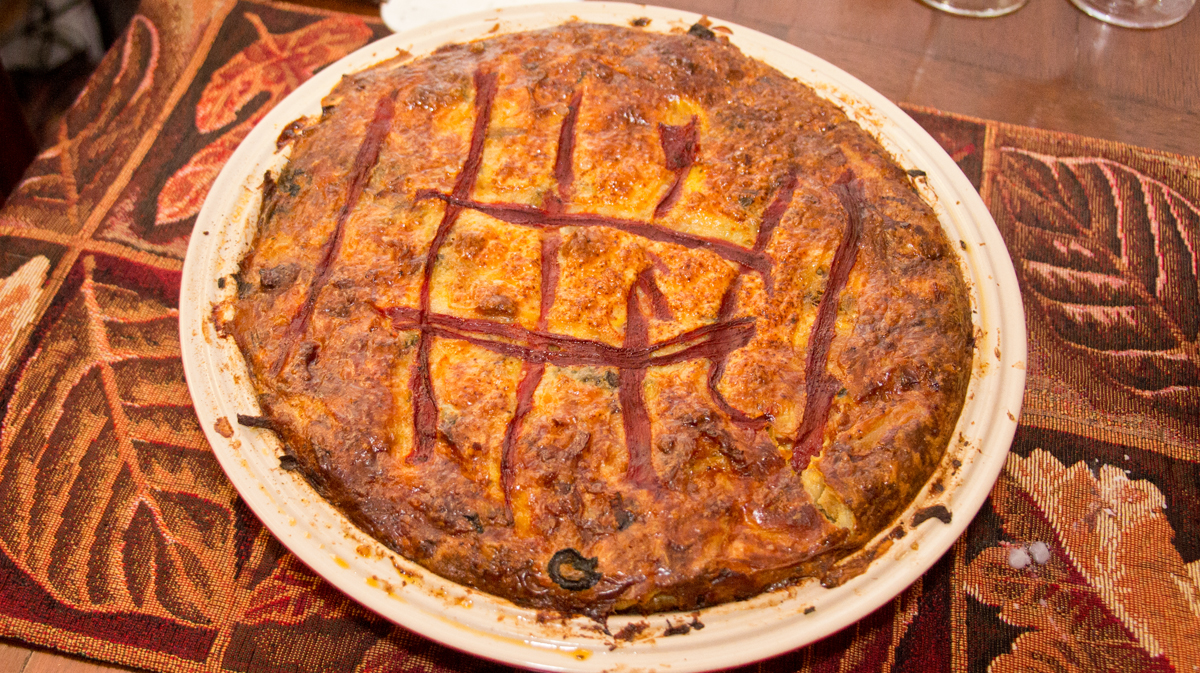 It’s Only You and Me and We Just Disagree You know the adage. Opinions are like… well you get the drift. The Men’s Wine Council convened again at Chez Tom to sample seven wines paired with food provided by the council members. I’ve got to say, we’re getting pretty good at this. This particular evening, though, took a few interesting twists and turns. As we sat down, seven bottles open and breathing, heavenly smells filling the air, we got down to the task at hand. First up was a Spanish offering, the 2011 Abadia de San Campo Albariño from Rias Baixas. Todd had spent most of the morning creating a Spanish frittata with potatoes and pancetta. It was a great match for the Albariño, a wine with Mandarin orange on the nose and a nice mouth-feel and a lingering finish. It also worked, but not quite as nicely with smoked salmon with black pepper and fresh squeezed lemon. At $16, this was a good buy and a nice start to our afternoon. Keeping with the Latin theme we moved on to the 2010 De Martino “Legado” Chardonnay from Chile. Scott prepared a chicken salad with peaches and cucumber with a mint and white wine vinaigrette. The salad was sensational and the wine was a winner, too. A touch of banana on the nose, well balanced with bright acids. It was an ideal match for the salad and also a good buy at $16. We then proceeded to the 2010 JordanChardonnay from Sonoma County. This wine was a hit with the entire crew. I picked up stone fruit on  the nose and green apple on the tongue. The finish lasted and lasted and it was heavenly with a Bavarian red  triple cream I selected as well as the smoked salmon. The $29 price tag wouldn’t prevent any of us from purchasing this lovely wine. Linda brought a platter of roast beef on crostini with virgin olive oil, black and green olives, horseradish and green onions. We stayed in Sonoma County, moving to Dry Creek Vineyards for their 2008 Meritage. This wine offered a great nose with blackberry, plum, black pepper and vanilla. This was a complex wine with supple soft tannins and boy did it play nice with food! It was a wonderful match with the roast beef, a blueberry stilton, capicola, smoked Gouda and assorted chocolates. We all felt it was priced well at $28. We sampled another offering from Dry Creek Vineyards, the 2008 “Endeavors” Cabernet Sauvignon. The bottle promised something good: heavy glass, substantial cork and simple elegance. The contents didn’t disappoint. I smelled dark cherry and plum and tasted cherry. It’s a complex wine that got better as it opened up. It wasn’t particularly food friendly, but it’s one of those wines that’s oh so good on its own. Of the foods I tried it with it went best with capicola and chocolate covered graham crackers. A bit pricey at $65, but all of us loved this wine. In fact, it spurred a lively discussion I’ll share with you later. Next we tried the 2008 Jordan Cabernet Sauvignon. I loved the nose on this wine. The tannins are still pronounced, but laying this wine down for a year or two will pay off handsomely. If you want to drink it now, decant it and let it open up. It’s got nice notes of cherry and berry on the palate. It’s priced at $52. Our final wine was the 2006 Pedregal Cabernet Sauvignon from Ray Franscioni Wines. This wine has a huge nose with oak and dark fruits. I found it slightly sharp on the palate, but it paired beautifully with chocolate. Expect to pay $20 to $25 for this wine. It came time to choose our favorite white and favorite red. We came to a unanimous decision on the Jordan Chardonnay as our favorite white. Here’s where things got interesting. An hour plus “discussion” ensued on the group’s favorite red, centered around a debate on what parameters to use to select a favorite. Is it the best wine on its own merits, or the wine that paired best with food? After a spirited, animated discussion, we decided to judge the wine on its own, food pairings aside and chose the Dry Creek Vineyards “Endeavors” Cab as our favorite. Next up, a tasting of wines from Laguna Canyon Wineryand we’ll end the year with a tasting of sparkling wines. Cheers!