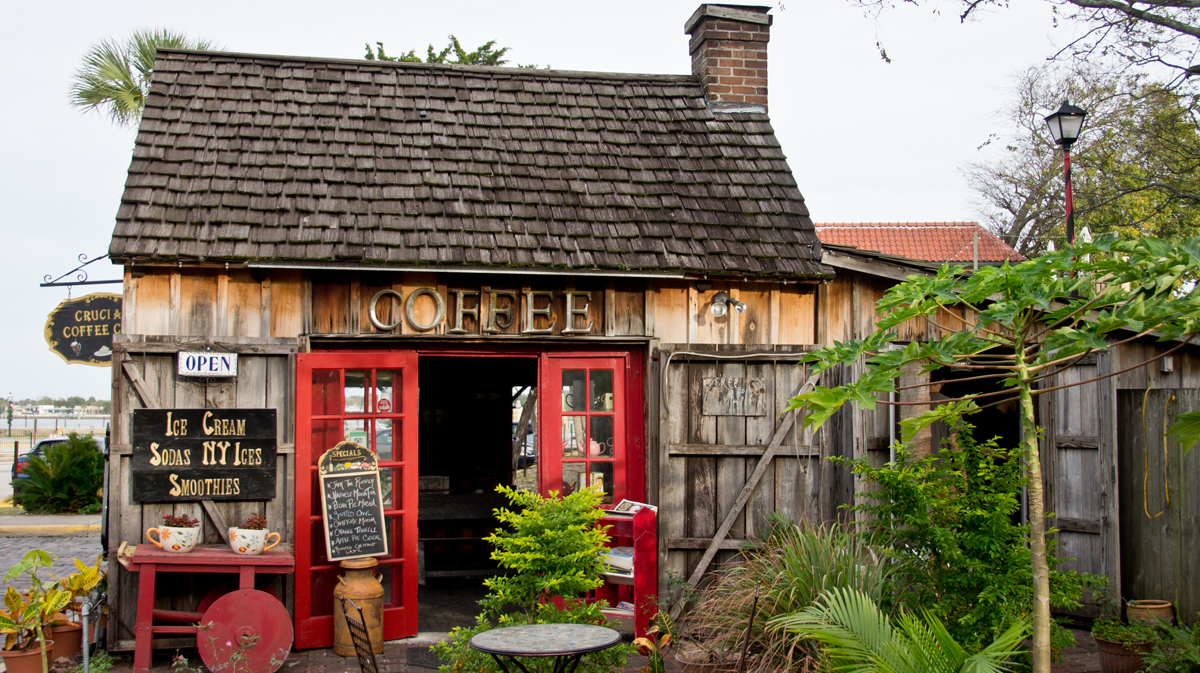 My head still spins a bit when I look back to the end of 2012. I flew in and out of Jacksonville airport three times in one month. The three trips were memorable to say the least. Let me share my visit to St. Augustine with you. I checked into the Casablanca Inn, a charming place right across the street from the waterfront. The Casablanca is a restored 1914 Mediterranean style bed and breakfast with 23 cozy suites and rooms. Fancy, it’s not, but if you’re looking for comfort in a place oozing with charm you need look no further. St. Augustine has been called “a town of historians”, a description I won’t begin to argue with. Each resident I met beamed with pride about the place they call home and it’s not hard to learn why.

I began my stay with a tour aboard one of the many trolleys that wind their way through town. The driver points out places of interest and you’re free to hop off anywhere you choose. Stops include Ponce de Leon’s Fountain of Youth and the original Ripley’s Believe It or Not Museum. After my tour, I returned to the Casablanca and pulled up a chair at the Tini Martini Bar. We were off to a great start, because longtime resident Alice Sutherland was there to take us on an abbreviated version of her “Tour de Chocolate.” It’s obvious from the moment you meet her that Alice loves where she lives and what she does. Following a taste of “Cocoa di Vine” we took a leisurely stroll down the antique streets and stopped at The Tasting Room for our first bites of chocolate. From there we walked just down the street to the Gourmet Hut and I knew we were in trouble. Owner Wendy greeted us and shared her passion for all things fresh and delicious as we gorged ourselves on chocolate covered strawberries, white chocolate covered blackberries and a Milky Way mocha all paired with “The Lion Sleeps Tonight” Malbec. We proceeded to waddle over to Claude’s Chocolate for some of the tastiest chocolate concoctions I’ve ever savored before returning to the Casablanca. We sat in the glow of the tiny white lights adorning the Casablanca and the Tini Martini Bar. While enjoying a dirty martini, owners Nancy Cloud and Michael Miles made us feel right at home. They pride themselves on finding unique properties and transforming them into cozy places that travelers seem to flock to. Maybe it’s the Sleep Number beds topped with a feather bed and Isotonic pillows. It’s also their attention to detail in even the smallest of things. Nancy and Michael also own the Balance Rock Inn in Bar Harbor, Maine. After spending millions on renovations, it’s garnered the highest accolades, including the highly coveted Triple A Four Diamond for many years. I arrived in St. Augustine just a few day before their annual Nights of Lights, when the city is decked out with three to four million tiny white lights. Nancy and Michael do their part by adding nine to ten thousand of their own. I first met Chef Jean-Stephane Poinard several years ago on a cruise to the Eastern Caribbean and had been looking forward to dining at his Bistro de Leon ever since. Jean-Stephane exudes charm, and when you walk into his restaurant you feel as if you’ve stepped into a bistro in the heart of France. Every morsel of food I tasted was remarkable, featuring fresh salmon carpaccio, flounder stuffed with shrimp and spinach topped with lobster bisque and an egg covered brioche poached in red wine. Simply perfection. Flounder stuffed with shrimp and spinach Mother nature was in a mood the next morning. After a delicious breakfast of Eggs Benedict at the Casablanca, we huddled together for warmth as we made our way to Eco Tours where the plan was to go out on the water with Zach McKenna. It was pouring rain and the sea was angry so we stayed inside and learned how passionate Zach is about marine life in his neck of the woods. “You can be ethically savvy and still make a living”, he says and he backs it up. He met his wife while attending college and they were the first to launch a dolphin study based in St. Augustine. Starting with one boat, one team and one camera, they have now teamed up with several universities and they study dolphin behavior up and down the Florida coast. Six times a year they all hit the water from Cape Canaveral to the Georgia coast taking pictures of each dolphin they see. “We come to work every day with the notion to do some good.”  I loved spending time with Zach and I’ll make it a priority to return and head out on the water with him. The lunch bell rang and we made our way just more than a block to O.C. White’s. The weather demanded a spicy Bloody Mary and they delivered the perfect one. Coquina is found in two places on this planet, St. Augustine and environs being one of them, and the O.C. White’s building is composed of this  tough, porous material. Originally the Worth Building, spirits are said to still reside and there are stories galore of supernatural occurrences taking place here. The spirits didn’t take too kindly to a fast food restaurant or a bar inside the building and neither one lasted long. Since it’s become a family oriented business, things have gotten calmer, but a few strange things happen from time to time. Lunch was very tasty with steamed shrimp and blue crab cakes stealing the spotlight. After a well earned nap, I strolled the colorful streets to make a bit of an appetite for dinner at Meehan’s Irish Pub. I have spoken of passion many times, but John Meehan is a man who personifies passion in nearly everything he does. “I’m passionate about Irish Whisky, I’m passionate about wine, I’m passionate about food.” Your could add Irish beer and a few dozen other items to that list as well. When you visit Meehan’s, take every preconception of an Irish pub you might have and flush it down the drain.  “An Irish pub is all about hospitality.” John grew up with a grandmother who made everything from scratch and he assumed that’s how everyone else did it. Scallops with fresh asparagus in a buerre blanc at an Irish pub? Absolutely. You’ll also find traditional Irish fare, but it’s all elevated to standards I’ve never seen elsewhere. Meehan’s pours more Guiness than anyone else in the area and John is meticulous about the way each beer is poured. Like Irish Whisky? They have a selection of 50 to choose from. He also has Jameson Black Barrel on hand for friends and family.

My first visit to St. Augustine won’t be my last. It’s a totally charming town and I know I’ve only scratched the surface.