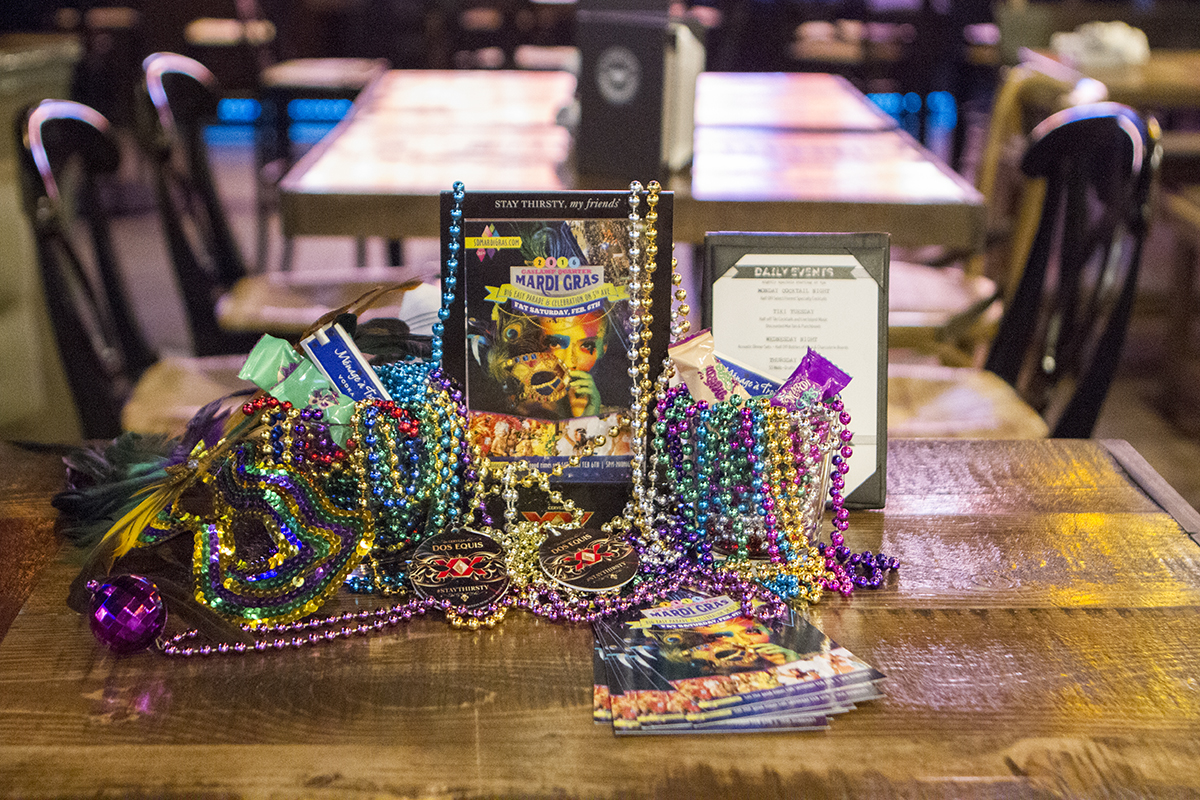 San Diego’s Gaslamp District is getting ready to do it again, the 22nd annual Mardi Gras Parade & Celebration. About two dozen bars and restaurants will take part by offering food and drink specials. Five stages on over ten blocks will feature live music and DJs and it’s all capped off with the Big Easy parade complete with floats at 9:00.

I visited Florent Restaurant and Lounge to get a taste of what’s in store. General Manager Jared Vallon was there to greet me. My table was impossible to miss; it was the only one adorned with Mardi Grad beads. Looking on the back wall I was taken aback by the enormous flat screen. Jared told me it was 17 feet and since it’s actually a computer monitor, they can simulcast several games. When there’s  not a game on, a screen saver of sorts shows tropical beaches and scenic photos from around the world. Executive Chef Brad Hightow is from Maryland, so it’s no surprise there’s a Maryland seafood chowder and a Maryland crab cake on the menu. I tried both. The chowder was deep red, with savory chunks of clams, ahi and swordfish. The crab cake sat atop a bed of roasted corn tartar sauce, and was golden brown on the outside and moist and meaty in the middle. I visited with Jared and learned Florent opened its doors in June of 2014. The vision of partners David, Mark and Scott, they wanted a place that was fun, different and swanky. They participated in last year’s Mardi Gras and are looking forward to being a part of it again. They “never do special menus” he told me. It will be their everyday menu with a specialty menu on top of it. Look for food with a New Orleans flair, like po’ boys and Captain Morgan based Hurricanes. My server, Nick, who’s been with Florent since it opened, brought me short ribs, braised six hours in Modern Times coffee stout on a Yukon gold mash with baby carrots. The meat was tender beyond belief and the flavors from the coffee stout simply divine. I hadn’t planned on having a second entrée, but just when I was trying to figure how I could squeeze in a bite of dessert, Nick presented seared big eye tuna nestled on a spaghetti squash bed with cucumber salad and yuzu caviar on top. The plating was exquisite and the tuna scrumptious.

Looking over the menu, the Cravory cookie sandwich caught my eye and sure enough, Nick had anticipated my wants. The sandwich consists of a lemon bar cookie with fresh strawberry ice cream and house-made whipped cream in the middle. It was so very tasty and a great way to top off a fabulous dinner.

Florent has an extensive wine list, which Jared described as many familiar selections with a few edgy choices as well. I enjoyed a pomegranate/cucumber mojito and a tequila old-fashioned from the bar, both delicious. Lunch is served until 4:00 daily and Jared says it’s the “best lunch downtown.” They have a lot of repeat customers and enjoying catering to locals. Saturday and Sunday brunch features $15  bottomless mimosas from 10 – 2. Florent believes in giving back to the community and does several charity events including casino nights.

I encourage you to check out the 2016 Gaslamp Quarter Mardi Gras from 5:00 until midnight Saturday, February 6. Check the website for ticket prices and packages. While you’re there, make sure you visit Florent. I loved it and plan to return. 672 Fifth Avenue in San Diego’s Gaslamp.