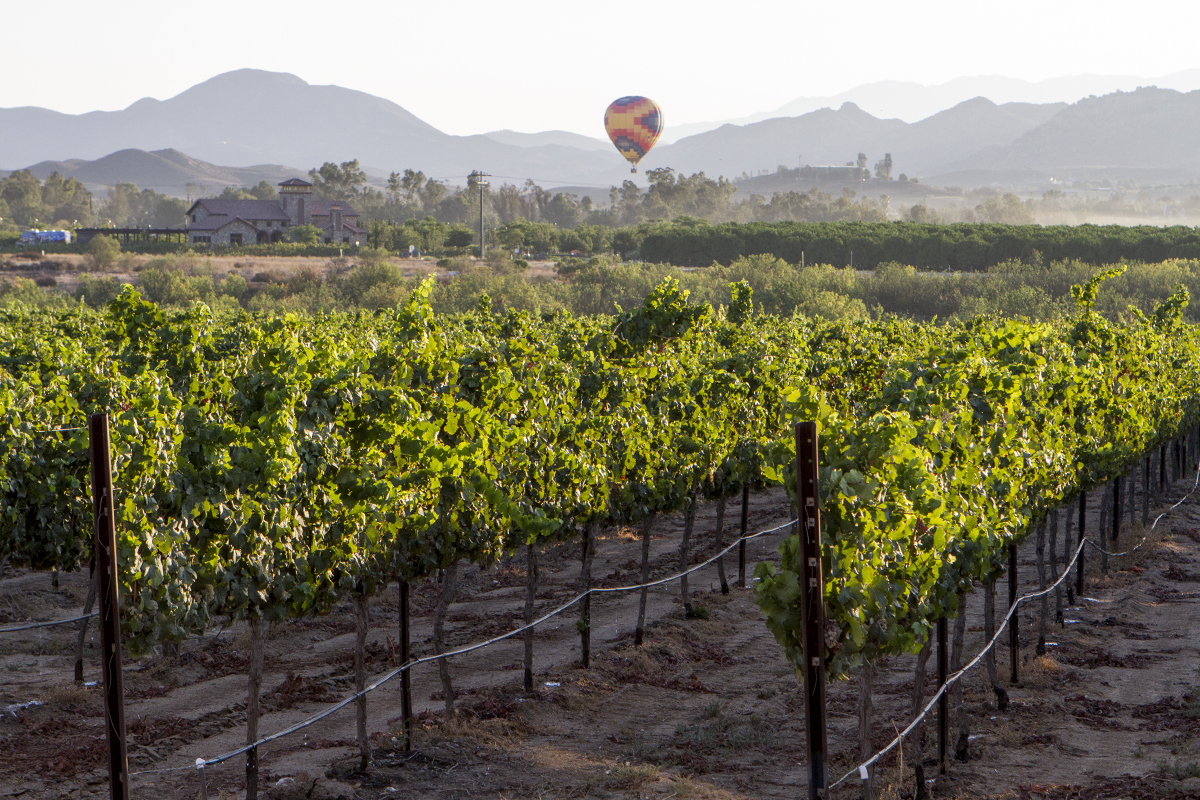 Jim Carter and I sat down at the Vineyard Rose and talked about his latest work in progress, Carter Estate Winery & Resort. Carter built the Temecula Valley’s largest winery and resort, South Coast, in 2002. He told me everyone thought he was crazy. “The valley isn’t big enough to support it.” He’s more than proved his critics wrong. Some 2350 awards and three Golden Bear awards for best winery in California lend credence to what he has accomplished. “It’s been a great adventure.” Carter Estate opened its doors earlier this summer. Kitty corner from South Coast, the tasting room and 42 bungalow suites are just the first of three planned phases. The spacious tasting room provides guests the opportunity to sit at the bar or nearby tables. You can taste their wines or opt for a wine and food pairing. Before they even opened the doors, the Carter Estate 2006 Cabernet Sauvignon picked up the only gold medal from a U.S. winery at a competition in Paris, France. Jim points to his winemaking team of Jon McPherson and Javier Flores and proudly calls them the best in the valley. “We want to make great wines and we want our neighbors to compete against us. Competition is what builds a great valley.” The resort is stunning. As you pass through the gate to the bungalow suites, you look out at the vineyards. Off to the right is the pool and spa area and the kitchen offers a wide array of dining choices featuring produce grown on property. We checked into our suite and were immediately impressed with how well-appointed it was. No attention to detail is spared. The bathroom was larger than many hotel rooms I’ve stayed in and the shower can easily fit two. Walk onto the patio and you’re in the vineyard. We made our way to the pool area and joined another couple in the spa. After waking up in a luxuriously comfortable bed, I pulled back the curtains to see hot air balloons rising over the vineyards. Carter Estate Winery and Resort is off to a most impressive start and this is just the beginning. Jim told me he plans to roll out phases two and three simultaneously. The final phases include a wine cave you will enter off a waterfall area. Two restaurants are planned, one a fine-dining establishment, and a demo kitchen where you can watch chefs in action and then purchase the utensils they used in the demo. A 180 room three-armed hotel will have a central court with a 3500 seat concert venue.

When I asked Jim if he had always had a passion for wine he replied “I grew up as a Nazarene. We were hardly allowed to drink!” He told me he enjoyed growing plants since he was a young man, and that he would take maple seeds and put them in a cardboard milk carton, grow a tree and give it to relatives in Ohio. He owned Hillcrest Trees for 18 years and grew ornamental trees for Southern California and the western states. He became a developer, but never lost his passion for growing and wound up growing ornamental trees for Wynn, Las Vegas. “I still had the passion to grow something. I didn’t know what it was.” Watching the movie “A Walk In The Clouds” inspired him and he began reading books and checking soil, water and sunlight at a 400-acre property he owned. He learned the conditions were ideal. His passion has carried him far. Carter Estate Winery & Resort is open at 34450 Rancho California Road, Temecula.