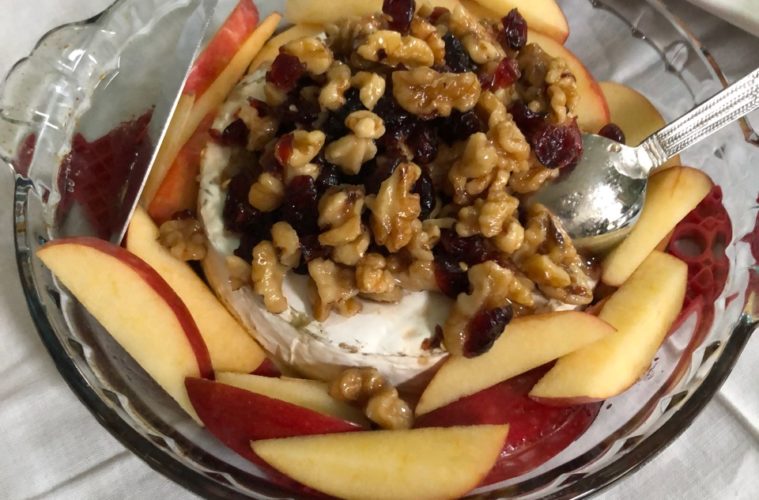 We’re a group of friends who are also travel writers. We gather occasionally to share a wine tasting and we make food to pair with the wines. Several of us had recently visited Santa Fe, New Mexico and most of us were pleasantly surprised to learn there are excellent wines being produced in the state.

We began our journey with Luna Rossa’s 2017 Pinot Grigio, which we paired with a splendid ceviche had brought. I found the nose earthy and quite fragrant with very ripe apple and honey on the palate. It paired beautifully with the cornbread and honey walnut baked brie Noreen brought. Our second wine was one of three we tasted from Italy, Vigna Petrussa’s Friuliano. It’s a grape rarely found outside of Italy and it’s delightful! This unique wine was very dry and Sue’s ceviche was the perfect match for it. We tasted another from Vigna Petrussa, the 2018 Ribolla Gialla. Another grape unfamiliar to many outside of Italy, it had plenty of citrus notes and was tart. It was an ideal complement both to Linda M’s salmon canape as well as apples. Our third Italian wine was La Fortezza’s Falanghina IGA. Deep golden, this was an incredibly expressive wine that was heavenly with Noreen’s baked brie. We progressed to reds, starting with a New Mexico wine, Vivác 2017 Nebbiolo. It’s a very pale red, similar to a Pinot Noir in color. The nose was stunning and it was vibrant in the mouth, a great pairing with Michael’s turkey kabobs with Tzatziki.

Luna Rossa provided the next wine, their 2015 Nini, a blend of seven Italian grape varietals that spent 58 months in barrel. This is a bold wine, and it went incredibly well with the barbeque ribs that Todd brought. I made orzo with beef, mushrooms and cheese and that paired nicely, too.

Our final red of the afternoon came from Noisy Water, a 2017 Montepulciano. Normally a dark, bold red wine, this was pale in color and light in body. It paired well with turkey kabobs and the baked brie. I always love to begin or end a tasting with sparkling wine, and we saved Gruet’s Sparkling Pinot Meunier Brut for the end. Gruet has received critical acclaim form the likes of Wine Spectator and it’s no surprise why. Produced in the traditional Methode Champenoise, it’s a pretty pink with lively bubbles. It’s a spectacular sparkling wine and it was wonderful with Linda S’s Chez Panisse Almond Tart.

I look forward to our next occasional gather and sharing it with you.