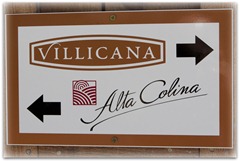 Laura and I have visited Paso Robles seven times in just over a year. Each visit has been unique, and I have to say this was one of the best visits yet. The wineries we visited were superb, and we made a new friend, DeAnna Morrison.

On our first afternoon, we visited Villicana Winery for the first time. We tasted six wines, and as far as I know, it’s the only time we’ve purchased every wine we tasted at a winery. They were all that good. I made arrangements to come back and visit Alex Villicana the following day. The winery is owned and operated by Alex and his wife Monica. He’s been around the area for quite some time now. In 1993 he released his first vintage, 200 cases of Cabernet Sauvignon through Creston Winery, which was at the time owned by Alex Trebek of Jeopardy fame.

He commuted from Los Angeles for nine years and during that period did a lot of research, discovering what varieties did well in which regions. He grew fond of Adelaida Road, close enough to town, but with a very rural feel to it. They purchased the 71 acres on which they are now located and opened their tasting room in 2002. He has 13 acres in production growing Cabernet Sauvignon, Syrah, Zinfandel, Mourvedre, Grenache, Merlot, Cabernet Franc and Viognier. The soil on Alex’s property is shale based as opposed to calcareous, giving the fruit a lower ph. He produces 2,00 cases annually, give or take, and has a yield of two to two and a half tons per acre. He buys from four different vineyards, complimenting his grapes. Alex tends the vineyards and makes the wine while Monica sees to the rest. Villicana is truly a mom and pop operation. He prides himself on small lot, handcrafted wines, and picks the barrels that go into each lot.

Alex shared a funny story with me. They opened the tasting room the weekend after April 15th, 2002. A group of accountants scheduled a visit to the winery. He told the bus driver not to come up the driveway because the bus couldn’t make the turn. The bus driver didn’t believe him, went ahead and tried it and got stuck. He wound up with a tasting room full of very happy accountants for several hours. If you visit Paso Robles, do yourself a favor and pay a visit to Villicana Winery. It’s one of our new favorites.