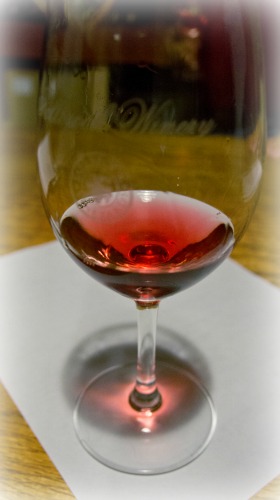 I recently stopped by Fallbrook Winery for a visit with owner Ira Gourvitz and winemaker Vernon Kindred. I always enjoy visiting there. It’s way off the beaten path, a quiet oasis. We went in back to the tank room for a taste of the 2010 Merlot and the 2011 Sleepy Hollow Chardonnay. The Merlot features fruit from the Fallbrook Vineyards as well as from the Sleeping Indian and Rolling Hills vineyards. It’s a classic Merlot with plenty of cherry on the nose and palate.

Ira and I then adjourned to the tasting room to go through the current lineup. We first met about three years ago, and though his wines were good when I first tasted them, they have shown steady improvement. I’ll share just a few of many recent awards they have earned: Platinum for the 2008 33ºN BDX Bordeaux Blend and Gold for the ’09 Merlot and Cabernet Sauvignon Reserve at the 2012 San Diego International Wine Competition. Wine of the Year for the 2011 33ºN Rosato (rosé of Sangiovese). Platinum and Best of Show for the 2011 Sauvignon Blanc Reserve and the 2009 33ºN Cabernet Franc at the 2012 Meritage International Wine Competition. Not too shabby for a winery you may not even have heard of. We started with a taste of the award winning 2011 Sauvignon Blanc Reserve. Featuring all the characteristics of a fine Sauvignon Blanc, it had a grapefruit nose, excellent balance and acidity and a lingering finish. Just a perfect wine for the triple digit temperatures we’ve been experiencing. Aged four months in new French Oak, it’s a steal at $16. The 2011 Rosato Rosé of Sangiovese is simply gorgeous to behold. Left on the skin for 10 hours, it’s fruit driven and nearly 100% dry. Using the saignée method, it makes their Sangiovese that much more intense. As we progressed to the 2009 Sangiovese, you can see the intensity in its deep color. On the nose I picked up dark fruits and the palate was concentrated fruit with a long finish. You can find it for about $33. 33ºN is the name for Fallbrook Winery’s estate wines and their fruit is magnificent. We tasted the ’09 Clone 4 Cabernet Sauvignon, the ’09 Cab Franc and the ’09 BDX Bordeaux blend, all of them serious and very tasty wines. The 2009 Dalla Collina (Italian for “from the hill”) is a blend of 70% Sangiovese and 30% Merlot. When released it will be their first wine with a $50 price tag. It’s aged in French Oak and then placed into large Italian puncheons. It’s a fruit forward beauty with bright acid. Only 100 cases were produced.

Ira says he’s “almost obsessive” about keeping yields to three tons or less per acre. He employs extended maceration and fermentation and is utilizing the talents of Ed Sbragia, winemaker emeritus for Beringer as a consultant. Jeff Landolt left for Cal Poly and returned with a degree in crop sciences and is the winery’s viticulturist. With Vernon Kindred handling the winemaking duties, Ira has assembled an impressive team that is producing world class wines.