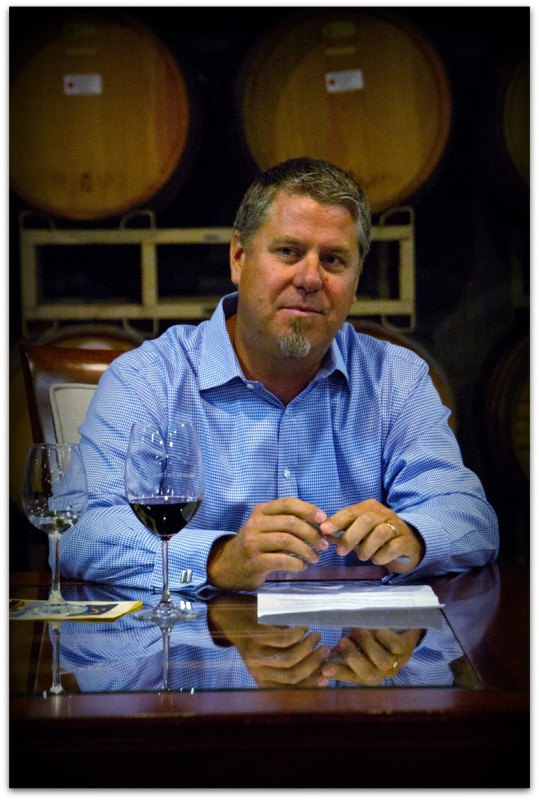 CRUSH 2011 – Temecula Wine Is Growing Up For decades, Temecula didn’t exactly have the best reputation in the wine industry. “They only make sweet wines.” “It’s too hot to grow good fruit.” The valley has taken its share of hits. When an outbreak of Pierce’s Disease wiped out much of the grape crop almost a decade ago, it may have been a blessing in disguise. Rootstock resistant to the disease was introduced. New varietals, better suited for the region, were planted. Viticultural techniques and vineyard practices have has been vastly improved. Much more research has been done on trellising and clonal selection. On September 10th, a panel of 10 winemakers and winery owners gathered in the barrel room at Monte de Oro Winery for a round table discussion to kick off the second annual CRUSH event. Eric Anderson of grape radio.com moderated a spirited discussion that touched on the past, present and future of the Temecula wine industry. Monte de Oro General Manager Ken Zignorski welcomed the guests, sharing that the winery is composed of 68 owners from 23 states, South Africa, Switzerland and England. He feels that having owners in so many different places is a boon for Temecula because they are able to spread the word so far. Mike Tingley, General Manger and winemaker at Danza del Sol Winery, recalled the early days. The first grapes were planted in the 1960s and included Chenin Blanc, Cabernet Sauvignon, Merlot, Johannesburg Riesling, Chardonnay and Gamay Beaujolais. In 1975 Callaway Winery was the first Temecula Winery to open for business, followed by Mount Palomar in 1976, Cilurzo in 1978 and Hart and Filsinger in 1980. Mike has been in the valley for three decades and was the first employee hired by Audrey and Vince Cilurzo. He says “if you saw another car you pulled over because you probably knew them.” In those early days, growers tended to plant for quantity rather than quality. The buyer was different then, too. Over time, they learned that Mediterranean varietals and those that fare well in warm climes would thrive in the Temecula Valley. His love of wine began while he was living in Europe in the late ’60s and early ’70s when friends introduced him to French Bordeaux. He calls that moment a “true epiphany.” His focus at Danza del Sol is on proprietary blends, creating something unique to the winery that no one else is doing. Etienne Cowper, the winemaker for Wilson Creek Winery, landed in the valley in 1991, arriving from Albuquerque where he had been selling real estate. He says Temecula was truly mom and pop oriented when he first arrived and over time it has become more sophisticated with complex business plans. When he met his wife they took a wine appreciation class together and things snowballed from there. Etienne went on to get his masters degree at Fresno State. After graduating, he began working at wineries in Northern California before eventually landing in Temecula. He loves crafting wines and blending. “There’s something about making wine and enjoying both the process and the final outcome.” There are frustrations, too, he notes. He made a dry Grenache Rosé and won medals for it, but in the tasting room, people were looking for a sweet rosé. He’s encouraged, though, noting “word’s getting out that there’s some really serious stuff going on here.” South Coast Winery‘s winemaker Jon McPherson says “this valley’s changed a lot for sure.” He came to Temecula in 1985 via Texas where his dad founded Llano Estacado Winery. He got into the wine business because “insanity runs in my family. The wine business is one of those things that will push you to drink.” But being a little crazy helps, he believes. He went to work at Culbertson Winery (later to become Thornton Winery) because he wanted to make sparkling wine. The valley didn’t begin to pay attention to which varietals would do well until the late ’80s. McPherson says there’s absolutely nothing he’d rather do than make wine – and visit with the people who drink it. He calls Temecula “the last frontier in California winemaking.” So many people from a population base of about 15 million people float through here, “we have to be true to who we are.” Doug Wiens always wanted to be a farmer. He got a degree in agriculture, bought some land in Lodi, planted some grapes and started making wine in his garage. He convinced his brothers to follow him to Temecula in 2004 when they opened Wiens Cellars. Doug believes Temecula is an ideal spot for growing wines grapes and that practically every varietal does well here. They grow 22 different ones. He doesn’t believe the valley should be be pigeonholed and takes a “more is better” approach. “Whoever comes through the door, if you’ve got something for them to enjoy, they’ll come back.” They cater to a wide variety of clientele and want to be certain they offer something for everybody. Cougar Vineyards owner/winemaker Rick Buffington also arrived in Temecula by way of Texas. When they set up shop in the Lone Star State, a friend suggested they make wine. They made a few batches, moved to Seattle and joined an amateur winemaking group. When they had to wait to use the group’s equipment, they bought a crusher/de-stemmer and then a a press. The hobby became serious and he and wife Jennifer set their sights on Southern California, buying land in Fallbrook. They then bought their present property on De Portola Road where they grow mostly Italian varietals including Montepulciano, Vermentino, Sangiovese and Malvasia Bianco. When Cane Vanderhoof first saw Picone Winery, he felt its bones had charm. Having befriended Jon McPherson and after being bitten by the wine bug, he started looking for a winery up north. McPherson told him the valley could use him, so he bought the Picone property and opened Miramonte Winery. He took the plunge not knowing quite what it was he was getting into. People like Jon McPherson, Mike Tingley and Etienne Cowper lent him considerable help. Pierce’s Disease robbed him of about 2/3 of his vines, so he replanted primarily to premium Syrah clones and Petite Sirah. He recruited winemaker Reinhard Schlassa who brought with him 30 years of winemaking on three continents and a degree from U.C. Davis. Says Vanderhoof, “we don’t emulate, we study and learn from other areas. We need to be who we are.” In his decade plus here, he has seen a trend toward denser plantings, with more thought and knowledge going into what’s being done. “If your tasting staff is well educated and knows how to deliver the message of your sincerity and your authenticity, that’s about the best you can do.” Mark Schabel came to Temecula about a year and a half ago, making him the relative baby of the family. Ten years ago, Mark was selling wine in Chicago when he had his lightbulb moment. He discovered he was more interested in learning how to make wine than he was selling it. He did some research before moving to Napa where he was a lab tech at several boutique wineries and eventually made his way south, with a brief stop in Monterey as assistant winemaker at Scheid Vineyards before landing in Temecula as head winemaker at Ponte Winery. Mark brings with him a degree from UC Davis. Nick Palumbo says for him, food has always been in the picture. Born and raised in San Diego, he moved to New York and spent six years there in the restaurant business. He moved back to San Diego and continued in the culinary field, but on a day trip he stumbled upon Temecula and was “blown away” to discover a wine country there. 30 days later he and his wife Cindy were living on a vineyard. He considered himself a “gentleman farmer” and was selling his grapes until one day Cindy said to him, “stop selling fruit, let’s make some wine.” He followed her advice and Palumbo Family Vineyards & Winery was born.He and Jim Hart co-chair the valley’s oenology committee and they offer classes for tasting room staffs including blind tasting and other wine related education. “I was genetically programmed to do this.”

I was thoroughly impressed with last year’s inaugural CRUSH event and was no less impressed by this one. Following the round table, we adjourned to Monte de Oro’s spacious patio to enjoy the fruits of these winemakers’ labors and some of the finest food Temecula purveyors have to offer. I’m already eager for CRUSH 2012.