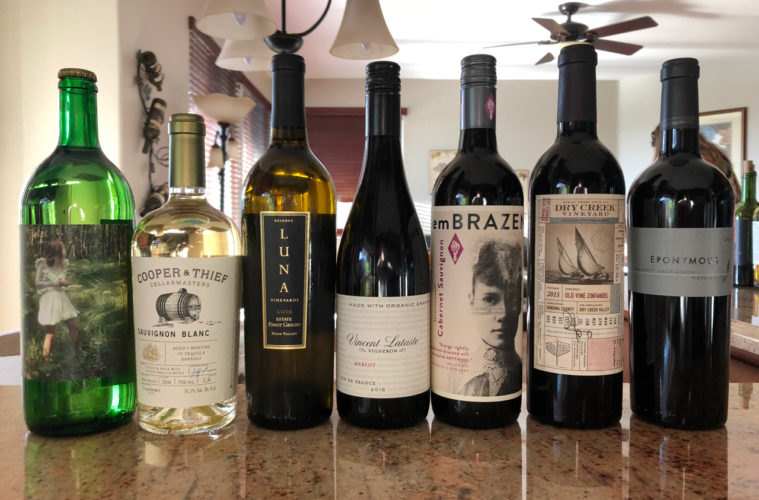 On an evening where the temperature had hovered around 100 during the day, the debate raged on whether to taste indoors or outdoors. As the sun set, the mercury dropped and we went outside to taste the seven wines I had provided. While we munched on hors d’oeuvres, we started tasting, starting with Gia Coppola’s 2016 #selfish. A blend of Pinot Grigio, Viognier, Pinot Blanc, Vernaccia, and Vermentino, Kathy called it “perfect for a hot night.” Kim said it was beautiful with lots of stone fruit and a good every day wine. Brian called it a well made wine for $18. Jan called it refreshing and easy drinking. Ken also picked up stone fruit and pear blossoms. It scored a solid four out of a possible five stars.

Next was a most interesting wine, 2016 Cooper & Thief tequila barrel aged Sauvignon Blanc. It definitely created a buzz. Jan called it a “marriage made in heaven. Where’s my salt and lemon?” Ed called it very, very nice. At 16.5% it was a bit hot for a few of the tasters, but it scored just under four stars. It sells for $25.

We moved on to the 2016 Luna Napa Pinot Grigio. Esther said it was her favorite yet and called it very refreshing. Brian enjoyed the “lingering savoriness.” Kathy found it nice and smooth. I thought the nose was muted, but the wine was enjoyable, but overpriced at $32. It scored three and a quarter stars.

We tasted an organic wine from France, Vincent Lataste’s 2015 Merlot. Brian said it was pleasant, but bland and lacking definition. Kim said it was very French and thought it was one-dimensional. I got dark fruit on the nose and tart cranberry on the palate and thought it was an excellent value at $12. It scored three stars.

Wine number five was the emBRAZEN 2016 California Cabernet Sauvignon. emBRAZEN was created to celebrate women, “trailblazers from the past,” rebels who deserve to be recognized. Alex thought it was interesting and edgy and thought it would be good with dessert. Someone else said it was a good wine to serve without breaking the bank. Jan felt it was overdone and hot. Brian said it was a bit rough, but could get better with food. Esther, however, loved it and gave it four and a half stars. At $15, it scored three and a half stars.

We tasted Dry Creek Vineyards’ 2015 Old Vine Zinfandel. Alex said it was the best wine so far. Esther liked it more and more as she tasted it. Kim called it a nice zin at a good price. Brian said it was “just what you want from a zin.” At $29 it scored better than four stars.

Our final wine was Eponymous 2014 Napa Valley Cabernet Sauvignon. Made with grapes from Mt. Veeder and Atlas Peak, it spent 20 months primarily in new French oak. I liked everything about it. Ken called it big and deep. Brian thought it possibly needed more time in bottle. At $60, it also scored four stars.