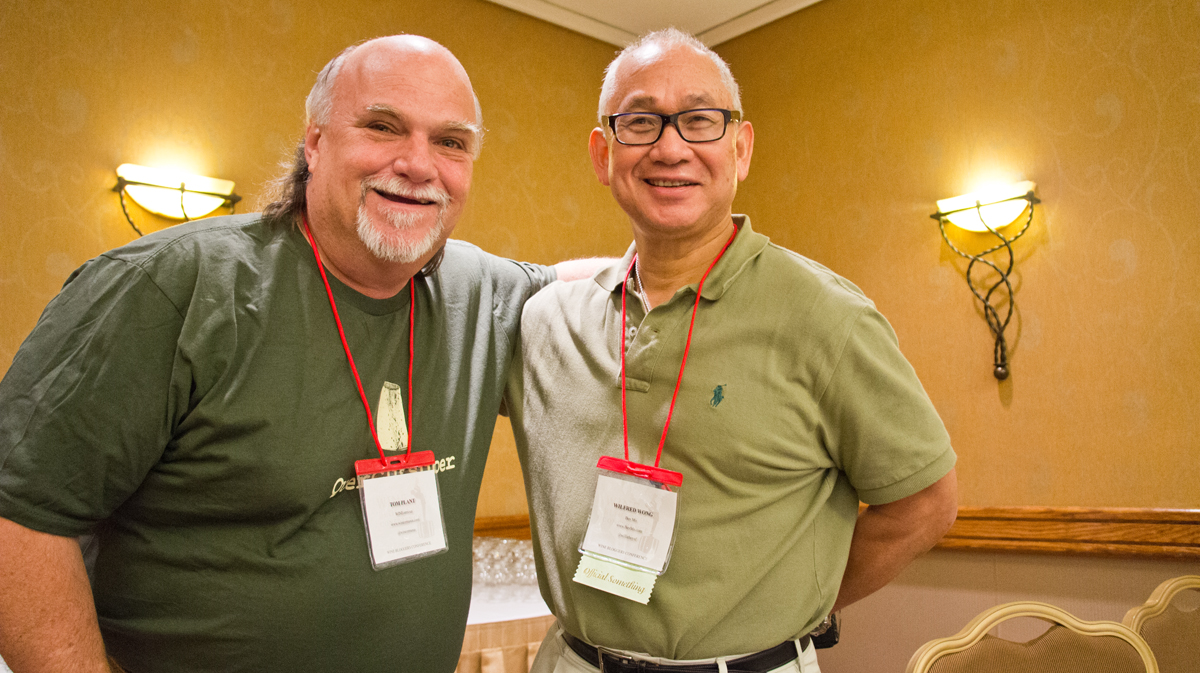 A Visit With Wilfred Wong When I was picking up my name tag at the Wine Bloggers Conference in Portland, I saw Wilfred Wong’s badge and thought it would be nice to meet him. Not only did I meet him, we had an opportunity for a good visit. As the Cellar Master and wine rater for BevMo!, most of us have seen his name countless times. I found I really knew nothing of his background and I decided to ask him how he got started doing what he does.

His love of wine began in 1972 when he was in a friend’s wine cellar making a delivery for his parents. His friend loved fine wines, particularly German wines, but he wound up pouring Wilfred a glass of 1968 BV Burgundy. He still has the notes. He thought to himself “this is pretty good” and he saw it as more than just a beverage. He grew up in a household where there was always good food and he developed his palate early. He used to drink wine at Thanksgiving and Christmas. His father drank Cabernet and his mother drank Champagne. Wilfred’s parents encouraged him to have “just a taste” of wine when he was a teenager so he could develop an appreciation for it.

His family had a shop called Ashbury Market in San Francisco. He developed a wine department that grew from zero to very credible. The wine selection at the time included early vintages of Caymus and Stag’s Leap among other now iconic labels from both Napa and Sonoma Counties. He had already begun to develop a strong following and had added wines from France, Italy, Spain, Germany, Lebanon and other international wine regions. He learned quickly if he liked the wine and could talk about it he could sell it. The only training he had was the pragmatic training he got learning how to run the family business while he was attending UC Berkeley. “I’m basically self taught.” If you saw the movie “Bottle Shock”, he says he was running in pretty much the same circles and considers himself quite fortunate. It was the birth of small California wineries.

In the summer of 1995 he’d already left the family business by mutual agreement. He found work at another wine shop that was a direct competitor to his family’s store. At the time, BevMo! was in its infancy. It was known as Beverages and More and consisted of six stores. The wine buyer quit, citing pressures from family, too much travel and too much stress. There was an opening for an import wine buyer. The job wasn’t on the market yet, but three different importers and vendors called to let him know a big time job was going to be made available and that if he applied he would be hired. After a two hour interview with CEO Steve Boone, he was told there were several candidates and that they would be in touch in about 10 days. It was only four days later that he got the call and the job offer. Wilfred’s response? “It’s too low.” Boone told him if he could survive two months he’d give him an $8,000 raise. It was one of those jobs that everybody wanted at the time and his hiring generated a lot of national buzz.

Sometime in the late ’90s he began rating the wines at BevMo! He first wanted to make sure everything was streamlined and consistent and that there was a system in place. He had already written for several magazines so he already had a system developed. In a typical week he’ll taste between 100 to 200 wines. A slow week is 40 – 60 wines. Two or three times a week he has appointments to taste with winemakers, vendors or suppliers. He doesn’t do the buying anymore. He strictly does the research. He tells the people whose wines he’s tasting what he thinks of them and send his notes along to his team. He travels internationally four to seven times a year with each trip lasting about 10 days, sometimes more. Add in the judging and VIP appearances for BevMo! and he’s on the road about 90 days a year. “There aren’t many open days.”

I wrapped up our conversation by asking Wilfred what his favorite wine region is. He didn’t hesitate. “Unquestionably it’s Burgundy.” It’s the most difficult and painful he says with both elements of pleasure and pain. He simply finds it fascinating. He also loves Bordeaux, because he says when the Bordeaux grapes are blended well they make fantastic wines. I left with a much better understanding of who Wilfred Wong is and I look forward to spending more time with him down the road.