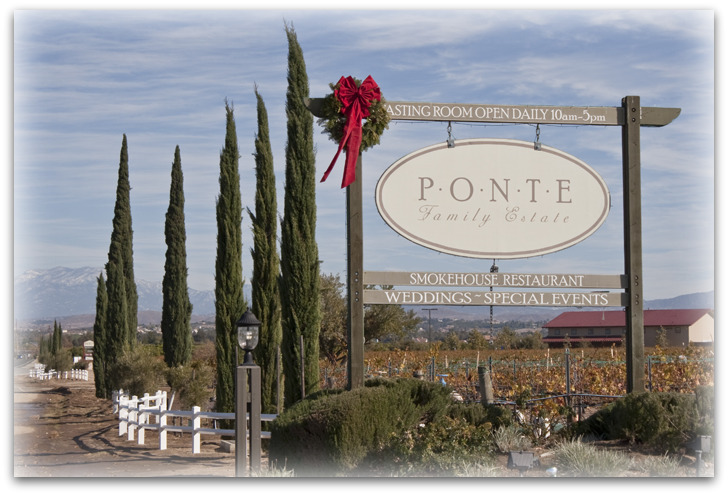 A Sit Down With Ponte’s Wine Maker, Robert Cartwright It had been more than a few months since I last visited Ponte Winery. I stopped by last week for a tasting, lunch and a visit with Winemaker Robert Cartwright. As you can see, Ponte is all dressed up for the holidays. Owner Claudio Ponte was there and I visited with him briefly before Robert and I strolled over to he tasting bar. Robert is extremely proud of the wines he makes. His Sangiovese and Barbera were both bin fermented and went through an extra 15-20 days of maceration after fermentation to add color and depth. The extra steps show in the quality of Robert’s wines.

On my last visit we enjoyed hors d’oeuvres on the patio, so this time I was looking forward to a full meal. While Robert and I visited, I sampled an amuse-bouche of tomato sage hummus on crostini, followed by black mussels with spicy Italian sausage, garlic and a white wine tomato sauce. Robert had lobster mac and cheese for lunch and I opted for the lamb loin chops with summer squash and potato pancakes, sautéd apples and mint pesto. The food was excellent and the setting was sublime – outdoors looking out at the yellow and gold in the vineyards.

We covered a lot of ground as we enjoyed our meals. Robert told me the focus at Ponte now is on renewing the vineyards. Their old vine Zinfandel, planted in 1967, will be re-trellised as will an additional four acres of grapes. He wants to pay more attention to sustainability, using more organic material. Although his vines see very few pests, they are controlled with organic pesticides. He wants the quality of fruit to best the finest possible. He says that making a conscious decision to plant the right varietals for this climate – Rhône and Mediterranean grapes in particular – is critical. Certain grapes, like Nebbiolo, aren’t suited to the Temecula growing conditions, yet some growers are trying to grow them. He believes they’re far better suited to places like De Luz or Fallbrook where it’s a bit cooler.

His goal is to use cutting edge techniques in his wine making, and he doesn’t hesitate to pick other people’s brains for advice and inspiration. He visits with Briar Rose‘s owner and winemaker Les Linkogle often, commenting that he’s cutting edge without even knowing it. They have purchased a new de-stemmer and berry sorter at Ponte. He has made a commitment to quality and to stepping up. South Coast Winery has won the Golden Bear Award as the state’s best winery two years running and he says that can’t help but push you to do better. Robert’s not concerned with the valley’s quality winemakers, his concern rather is with those who don’t take the extra steps needed to produce quality wine. To that end he offers his services to other winemakers who may want use his tanks to make their wines. So far he’s had no takers. “Everyone here is out here to help everybody.”

He pays attention to what’s going on at other wineries, and has praise for folks like Robert Renzoni, noting his passion for making quality wines. He says he expects good things from Vindemia, already winning awards before opening. Not that he wants to steer traffic away from Ponte, but he says he’d like to see more folks visiting the wineries on the De Portola trail. The mountains are beautiful and places like Leonesse and Keyways are producing good wines. Robert believes ambition and drive are important, but also feels passion is the difference between a so so wine and a great wine. He thinks those who are in it strictly as a business are doomed to fail.  “We’re a destination. It’s got to be an experience.” Restaurants are a big part of the experience and he notes places like Callaway and Wilson Creek are doing a great job to that end, including pairing the right wines with the food they serve.

Claudio Ponte has a commitment to excellence and demands it from those who work for him. Cartwright says “I hit a home run when I got the job here. The company allows me to grow and try new things.”