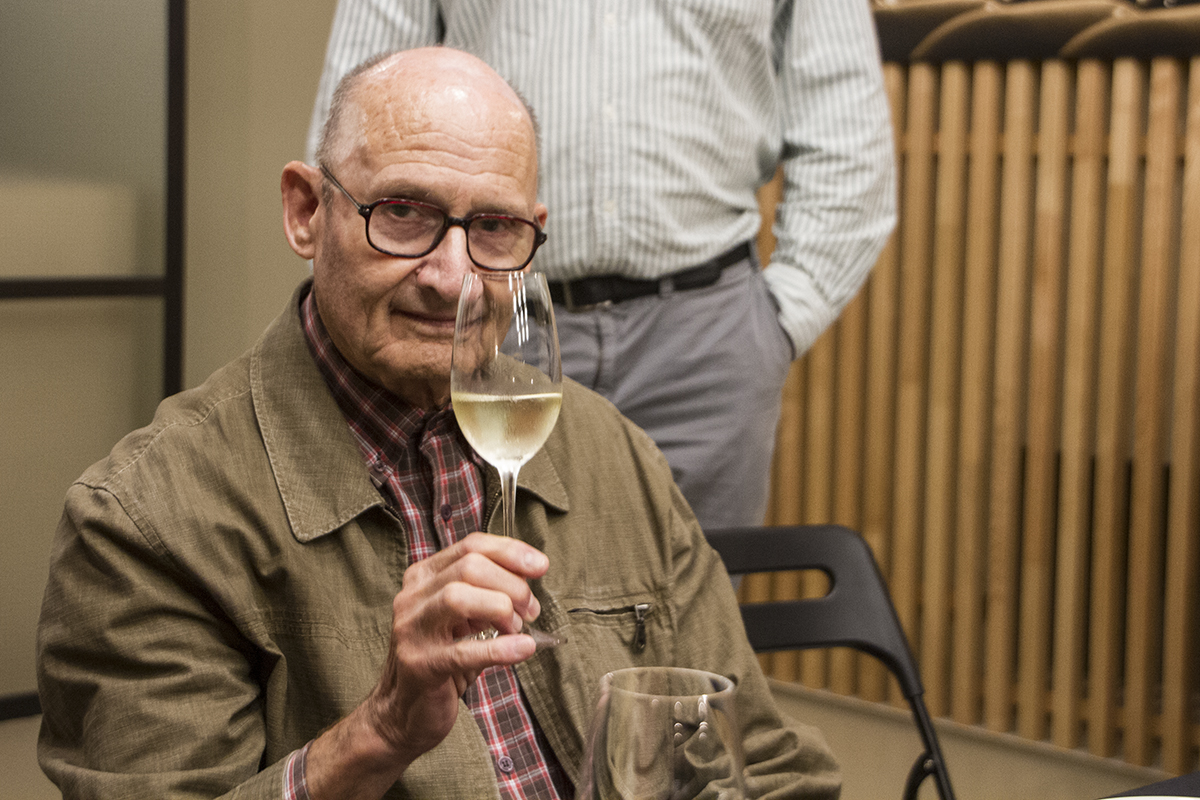 When the opportunity presented itself to visit the 50 Great Cavas of Spain, I jumped at it. Six bloggers were invited, and I was blessed to be included in that group. After the long flight from LAX via Philadelphia, I landed in Barcelona and met two of my fellow companions. We hopped on a bus and headed to the train station, where we caught the first of two trains bound for Sant Sadurni d’Anoia. After checking into the magnificent Hotel Fonda Neus, I took advantage of the picture perfect Autumn weather and took a stroll. There wasn’t any doubt I was in Cava country. There were blackboards outside of wine bars all around touting their “Copa de Cava.” Signs on lampposts touted the “Ruta de Cava.” This was getting exciting. Nuria and her father Pere Carbó were on hand to greet us when I got back to the hotel. Everywhere you turn you see a nod to cava in brightly painted walls, water features and a column that adorns the lobby. The downstairs restaurant features Catalonian fare and the hotel has ten guest rooms and four lounges. While most parts of the wine world loathe Phylloxera, in Catalonia they throw a festival in its honor. Bottles of cava at Fonda Neus are adorned with a plastic Phylloxera on top. They celebrate the fact that they were able to come to the rescue for France after many of their vineyards were decimated in the 19th century.  Pere Carbó shared  bottles of cava produced by his wife’s side of the family with us and we toasted while gazing out at the spectacular Montserrat range. We were off to our first Cava visit with a stop at Gramona. Gramona celebrated its 125th anniversary in 2006 and is now in its 6th generation with Gramona-Batlle family at the helm. Winemaker Jaume Gramona shared his philosophy of producing fine cavas with us. He’s one of the few people I know that places a cork in each bottle before disgorging rather than the standard bottle cap. He firmly believes it makes his cava taste better. We enjoyed a delicious dinner catered in one of the caves while we tasted Gramona’s exceptional lineup of cavas. We began the next morning with a visit to Mas Tinell. Mas Tinell’s new home also features an ultra-modern 11 room hotel with windows designed to resemble cava bubbles. We did a station to station cava tasting with a different cava at each stop as we toured the cava and hotel. We had our first glimpse of the cava making process, watched a bottle being disgorged and had a bite of charcuterie on a roll before moving on to our next stop, Mascaró. We toured the cava and sat down with the 3rd generation owner, Montserrat Mascaró for a cava tasting and a Paella luncheon. Not only does Mascaró produce stellar cavas and still wines, they distill spirits as well. We tasted their orange liqueur, brandy, gin and a few others. Mascaró continues their proud tradition as they also innovate. We checked into the Hotel Sol i Vi located between Vilafranca de Penedès and Sant Sadurni d’Anoia. This charming hotel has a restaurant and bar in the lobby and I was lucky enough to get a room with a hand-painted fresco above my bed. You learn quickly that having an elevator in a European hotel is a luxury after hoisting your luggage up a few flights of stairs! One stop remained for the day. We stopped at Llopart, where they have been producing cava since 1887. Jeci Llopart met us in the test vineyard where we nibbled our way through dozens of different varietals. She led us on a tour of the property. There’s a spectacular panoramic view from Llopart, but gray skies prohibited us from enjoying it all. We stopped at the production facility for a few tank samples before heading back to the main building for cava tasting, hors d’oeuvres and a visit. Jeci’s parents were both on hand along with one of her brothers. Llopart truly defines family business. Their cavas are exceptional.