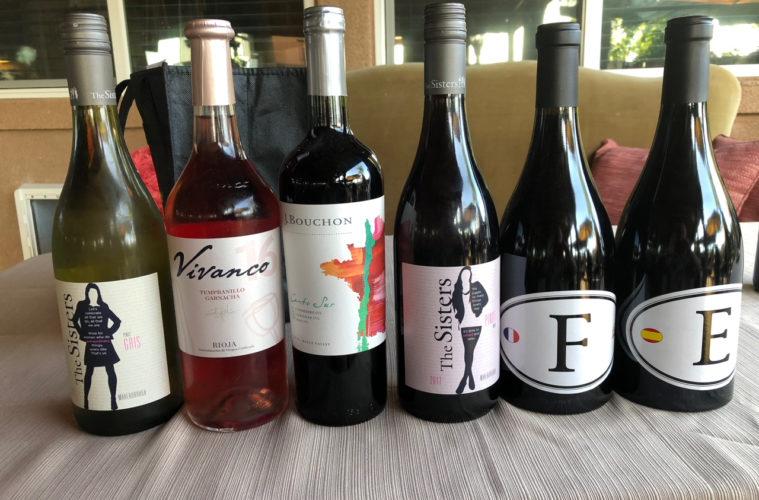 I look forward to every one of our wine tasting gatherings, but I especially look forward to the ones at Scott and Wanda’s place. Not only are they wonderful friends, but they are gracious hosts. I’ve never seen anyone leave their home even the least bit hungry.

We tasted six wines, but I’m only going to tell you about five of them. The other one got a solid thumbs down from everyone in the group. First was The Sisters 2017 Pinot Grigio from Marlborough, New Zealand. Al liked the nose and said it had good fruit and a nice finish. Ken enjoyed the stone fruit nose and called it refreshing. Kathy liked its crispness and grapefruit flavor. At $17, it scored a solid four out of five stars from our tasters.

From Rioja, Spain we tasted the 2016 Vivanco Tempranillo Rosé. Lisa called it light and refreshing with hints of strawberry. I loved its color. Esther enjoyed the Pinot Grigio, but felt this wine was “even better.” Randy gave it four and a half stars and said it was very nice, not sweet at all. Ken called it good for the $14 price. Scott loved the acidity. It scored a hair under four stars. Our fourth wine (remember we’re leaving one out) was another from The Sisters, their 2017 Pinot Noir. Esther gave it a perfect five-star score. I liked its color and balance and thought at $20 it was a good value. Kathy called it a “nice, light” Pinot Noir. On the other hand, Randy didn’t care for the nose at all and Ken called it “drinkable, but way too expensive.” It scored about three-point six stars.

We finished with two wines from Locations, Dave Phinney’s project to blend grapes that normally wouldn’t wind up together in the same bottle. His F5 French red wine is a Grenache/Syrah blend with assorted Bordeaux varietals. Esther loved it and said it was great with a chocolate chip cookie. Kathy said she tasted lavender and called it a nice French wine. Lisa said it was easy to drink. Scott said it was an excellent value at $18. Joe liked the cranberry notes. It scored better than four point two stars.

The second Locations wine was the E5 from Spain. A blend of Garnacha, Tempranillo, Monastrell and Cariñena, Randy said it was excellent. Ken called it his favorite. Lisa called it her “favorite tonight.” Esther said it was “really good and not just because it has an E in it.” Priced at $18, it scored a solid four and a half stars.