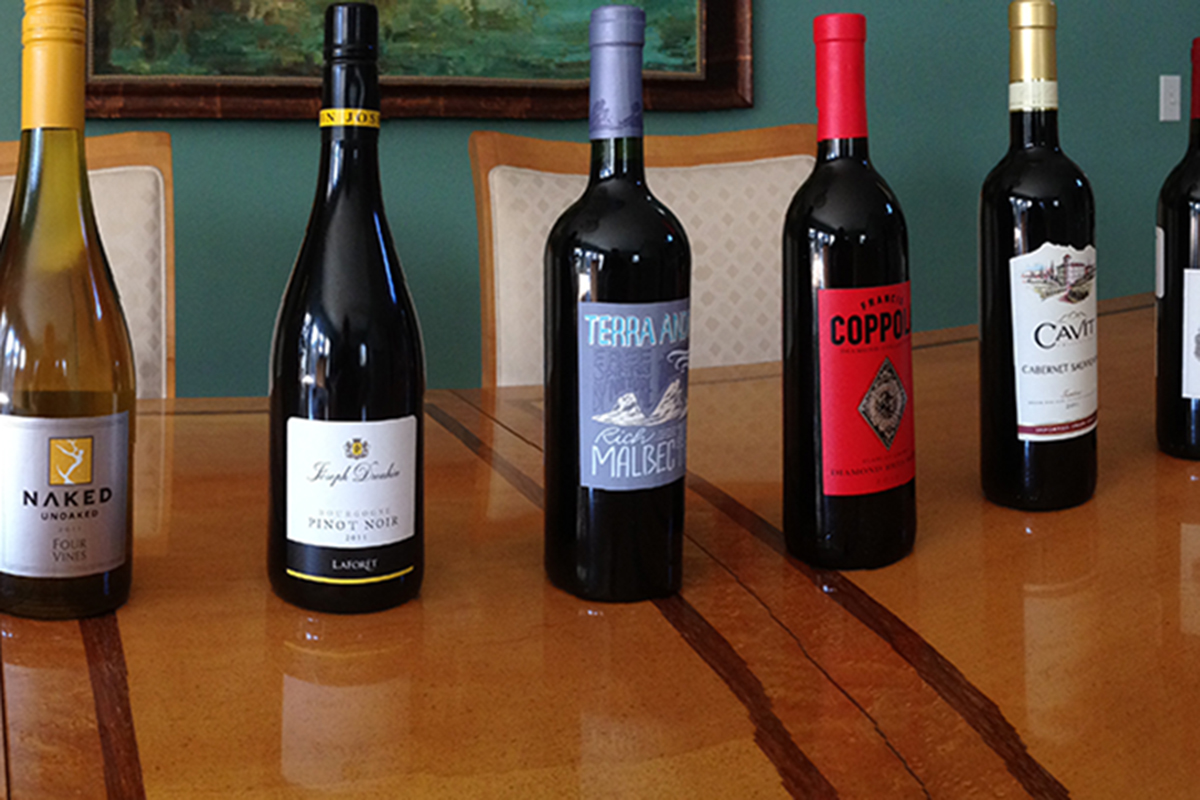 Wine Is Always Better When Shared

We gathered at a friend’s home, about 10 of us, with eight bottles of wine to share. Some brought pizza, others brought cheese and crackers, and truffles that started melting in the mid-summer heat. I came with eight wines for us to taste, talk about, share what we did and didn’t like about them. We raised a few toasts to companionship, food and wine and dove in.

On a day when the mercury was well into the 90s, all were pleased to see three whites lead the way. First was the Terra Andina 2012 “Fresh” Sauvignon Blanc. Crisp was a common comment. Jean felt it was a great summer wine and Al loved the fruit and thought at $10 it was an excellent value. I agree. On a one to five-star scale it garnered a solid four.

The nose struck me right off the bat on our second wine, Dry Creek Vineyard‘s 2012 Fumé Blanc. I noted tropical fruits, Jean picked up citrus. I thought it was very well-balanced with bright acids. All agreed it was a great value at $10. A few weren’t pleased with the finish, but I thought it was solid.

Chardonnay can often be a hot button wine. People like it or they don’t and then there’s the oaked vs. stainless factions. We tasted Four Vines “Naked” 2011 Unoaked Chardonnay. Amy gave it six stars on our one to five star scale, so clearly she loved it. A few who prefer oaked Chardonnay stated so, but said they still enjoyed it. I thought it was unspectacular, but at $9 a bottle, it’s an easy drinker.

Most of the group didn’t care much for the Joseph Drouhin 2011 “La Forêt” Pinot Noir, but I know these people and they lean towards new world Pinots. This is a classic Burgundian Pinot. It showed a lovely pale color, and displayed strawberries and raspberries on the nose. Jean felt the fruit was lacking and that it was too acidic. Tony liked the $15 price point, but found it a bit light for him, but he added he still enjoyed it. It averaged about two and a half stars.

We tasted another wine from Terra Andina, the 2011 “Rich” Malbec. Tony thought it was a great everyday wine for someone on a budget. Jan thought it was very nice, smooth with a nice nose and finish. I found it fruit forward with a lot of bing cherry and a solid finish. It’s a solid value for $11 and it got an average of three and a half stars from the group.

Francis Coppola‘s 2010 Diamond Red Blend was next in line. Ken raved about it, enjoying the nose and its complexity. This wine is a blend of Zinfandel, Syrah, Petite Sirah, Cabernet Sauvignon and Merlot. Jean noted the pepper from the Zin. Al liked the big, fruity nose and thought the blend was exceptional and gave it five stars. You’ll find it for about $16.

The 2011 Cavit Cabernet Sauvignon from Italy was next in line. At $8 I wasn’t expecting much and I got what I expected. Tony, however, thought it was the best value of the night and would definitely buy it. Ken thought it was unbeatable for the price with a luscious color and smooth through the finish. Other tasters found it thin and weak.

We ended the evening with the 2009 Jordan Cabernet Sauvignon. I loved the floral nose, but found it a bit lacking of the palate. Jake loved the depth of flavor, the tannic structure and blackberry notes. It was generally well received, but a few thought it was overpriced at $53.

We were all in agreement that wine is always better when it’s shared.