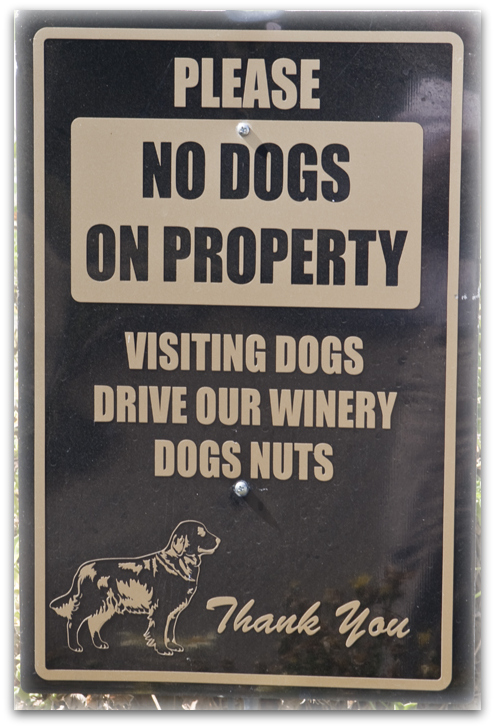 After spending nearly three hours with Bill Wilson, I have a much clearer understanding of how Wilson Creek grew to become the player it is today in the Temecula Valley. It’s a fascinating story. We sat in Bill’s office – a table outside near the tasting room on a beautiful autumn morning. He told me he was facing a mid-life crisis in the mid ’90s. He had spent 13+ years in the financial industry and it just wasn’t fulfilling. After trying a few other ventures that didn’t pan out, he asked his best friend what he should do and his friend advised him to open a winery. Having just returned from the Temecula Valley, his friend had met a winery owner who wanted out of the business and was willing to carry paper. Bill’s dad Gerry was getting ready to sell their home in Pasadena and move to Santa Barbara. After discussing things with Bill, he agreed Temecula was a better option. He then called his brother, an ordained minister in Sacramento and asked what he thought of the idea. His brother responded by reminding him what Jesus’ first miracle was. He saw no problem with the idea at all. When he approached his sister who lived in Solvang, she said that she traveled with a suitcase of wine glasses. Her only question was… why Temecula? After doing some research, Bill came up with five reasons:

With the family on board, they bought the property. At the time it was nothing but grapevines. There was no electricity, no buildings and the gardens below were used as an illegal dump site. Bill listed his qualifications for starting a winery. He liked wine and they knew how to throw a pretty good party. The path to getting the doors open was strewn with roadblocks. The Wilsons didn’t come from deep pockets and the wine industry is an expensive game. They did it on what Bill calls a “pauper’s nickel”. They borrowed money from friends and family, phone calls he says were the hardest they’ve ever had to make. “We did beg”. At that time, Bill says, “it was so bad that for lunch we had peanut butter sandwiches and for dinner we had the luxury of putting jelly on them.”  When they did finally open, that made them appreciate what they had that much more and made them willing to work that much harder to run a successful business. They didn’t just say to their first customers “come on in” they said “THANK YOU”. “We were real people starting something that real people don’t start. We were too stupid to know better, yet smart enough to get it to work out.”

As their grand opening approached on the Y2K New Year’s Eve, they wanted to come up with something different. Bill’s wife, Jennifer, wanted something “unusual and fantastic”. They asked a producer if they had anything unique. When they got the first samples, nothing jumped out at them. Again they asked for something different. The producer told them they were working on something they thought would be a winner and asked if they wanted to try it. Shortly afterward they received the first batch of Almond Champagne and fell in love with it. After tweaking the recipe, they ordered 10 cases thinking that would last them a while. It sold out in four hours. Bill’s reaction? “Holy #!@&!” They then ordered a palate. That lasted six days. Wilson Creek’s Almond Champagne put them on the map. Bill likes to say they took wine tasting off the snob shelf and made it fun again. Wilson Creek’s growth has been meteoric; so much so that it’s made it very difficult to keep up with demand. They know they can’t compete on price with the big discounters, so what they offer is an experience you can’t get anywhere else. They make an effort to go the extra step. If you don’t see Bill, you’re likely to run into his mom and dad, Gerry and Rosie, or his wife, brother, sister, brother-in-law or sister-in-law. They all work at Wilson Creek. Bill knows it’s critical to have something that differentiates you from the rest of the field. In Wilson Creek’s case, the “it” factor is family.

Last year they opened The Creekside Grill. Bill said the kitchen wasn’t designed to be a restaurant kitchen, yet they keep putting out amazing food. He calls it the “little kitchen that could”. We had a delicious lunch and I mentioned how big the portions were. He said they’d rather spend a little more money and give you enough so you can take something home rather than risk having you be disappointed by a meager serving. The restaurant affords them flexibility and the opportunity to provide better events. They brought winemaker Etienne Couper on board in 2007 and he is overseeing his third harvest. With Couper making their wines, Bill says they’ve gone from hit or miss to a home run every time. His goal was to provide him with a facility worthy of his skills as a winemaker. Most of their wine comes from grapes grown on the estate: Chardonnay, Cabernet Sauvignon, Zinfandel, Merlot, Mourvedre, Viognier, Muscat, Syrah, Petite Sirah, Petit Verdot and Grenache. I tasted across the board and was duly impressed by by the overall quality of the wines. You’ll see Bill’s sense of humor, too, in their Pinot Noir/Mourvedre blend Pinot-Mour and their You Bet Shiraz. Say them out loud.

Bill feels confident that the key players are in place, but you won’t find him resting on his laurels. “When your name is on the marquee and you’re here, hearing it firsthand from customers that aren’t afraid to tell you good or bad, it takes a toll on you.” He never wants to lose the personal touch, but as the winery grows it becomes increasingly difficult. Bill is striving to find a balance, managing time spent at work, with family and his personal life. “I’m selling a product that provides enjoyment to people and as long as people are happy I want to be here to experience it along with them. I’m very blessed they pay me for that. We appreciate what we have here and and we want to share that with everybody – and have everybody appreciate it as much as we do. That’s the key to our success.”