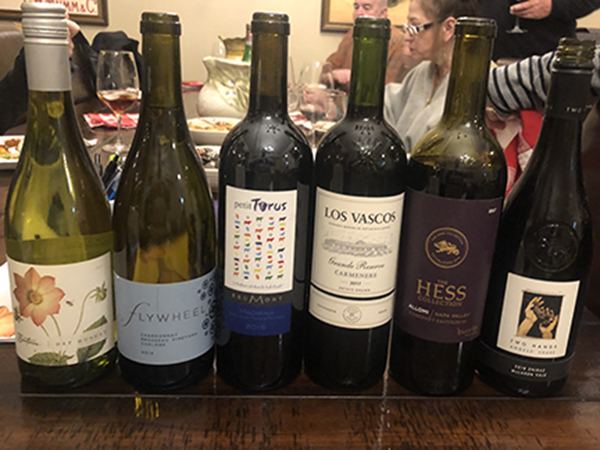 When All Else Fails, Taste Wine!

To say these are trying times is a vast understatement. As of this writing I have lost my employment and am without income. I know I’m not the only one and I realize there are others in far more dire situations than me. On the bright side, I can still taste wine! Our group of spirited wine tasters got together recently at Scott and Wanda’s with an eclectic assortment of wines to taste. As always, food was abundant and delicious. We began the evening with a wine that raised more than a few eyebrows, Bonterra’s 2017 Lake County Dry Muscat. Despite the fact that the word dry is in its name, several feared it would be a sweet wine. It wasn’t. Chris picked up honey on the nose and apricot, peach and orange on the palate. He liked the lively acidity and long finish. Alicia called it surprisingly good and Beth said she loved it. Cheryl said it had “all the flavors of a Muscat without the sweet. It scored just under four out of a possible five stars and it sells for $16.

ROAR Wine is synonymous with exceptional California Pinot Noir, Chardonnay and Syrah. My cousin, Scott Shapley, just happens to be their winemaker and a few years back started making wine under his own Flywheel label. We tasted his 2014 Chalone Chardonnay. I loved its soft nose and bright fruit flavors of lemon and apple and found it well-balanced. Most of our tasters enjoyed it, but at $38 felt it was over-priced. It also scored just under four stars. We moved from California to France to taste the 2015 Brumont Petit Torus Madiran. Our group wasn’t wild about this wine, but at $13 they felt it was absolutely drinkable. I picked up tart red fruits and there was no doubt it was an old world wine. Scott said it lacked complexity, but found it without flaws and liked the nose. Phyllis said she enjoyed it. It scored about three and a half stars.

Our next wine was from Chile, the 2017 Grande Reserve Carménère from Los Vascos. Scott called the nose amazing and picked up pomegranate. Cheryl called it earthy with plum and slightly spicy. It’s a deep red, earthy wine and I got pomegranate, too. Expect to pay about $12 for it. It scored four stars. I got the group’s attention with the 2017 Hess Collection Allomi Cabernet Sauvignon. This Napa Valley Cab is a show-stopper. At 14.5% alcohol, it also has a bit of Petite Sirah, Petit Verdot, Malbec and Merlot. I loved the chocolate, cherry nose. Randy called it really good. Cheryl said it was bold with strong tannins. Ken called it “silky smooth on the palate all the way to the finish.” Phyllis simply said it was “yummy.” Chris Remarked it was “well-balanced with hints of chocolate, lavender and a touch of spice on the finish.”  At $32, it scored nearly four and a half stars.

We ended with an Australian wine, the 2018 Two Hands Angel’s Share Shiraz. In the midst of Australia’s devastating wildfires, Two Hands committed to giving 100% of the tasting fees at their winery for eight weeks to be given to wildfire victims. Randy said “I really like Shiraz and this is good!” Chris liked its dark ruby color with blueberry and spice on the nose. I didn’t care much for the nose, but liked it very much in the mouth. Kat liked it and thought the $33 price tag was just right. It scored about four stars.