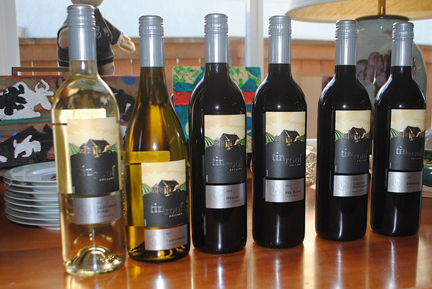 It was a bright, wintery, late afternoon in southern California and the Occasional Wine Council gathered in the Temecula Valley Wine Country to try some interesting wines, paired with delicious dishes prepared by members of the group (writers, photographers, consumers).  We met at the home of Sue and Todd Montgomery with the fire roaring and their little black cocker spaniel wagging her tail and hoping for a bite of sausage.  In addition to Sue and Todd, eager participants included Tom Plant, Corletta and Karsten Boone, and wine diva, Linda Kissam, the Council’s revered leader.

The featured winery was Tin Roof Cellars, which offers a variety of excellent, reasonably priced wines from California grapes grown in Lodi, the North Coast, the Central Coast, Sacramento, and Lake County. We were amazed throughout the evening at the quality of the wine, all at impressively low prices. We began the evening with a lovely 2011 Sauvignon Blanc, produced from Lake County and Sacramento grapes, which at only $9 a bottle was one of the hits of the tasting and voted the #1 white wine of the evening.  This was a crispy but fruity wine with a zesty punch that went well with Sue’s paired dishes, including tempura shrimp accompanied by a soy dipping sauce (Sue admitted that the shrimp was straight from Trader Joes), and crispy, toasted asparagus wrapped in prosciutto that had been spread with a spicy French grained mustard.

The next white wine was a 2011 Chardonnay, again a steal at only $9 a bottle. This rich wine had a pleasant acidity along with lively apple and peach flavors. Its balanced, deep taste reflected its grapes’ slow growth on California’s cool Central Coast. This wine would go well with many light fish and chicken dishes and also was enhanced by Coletta’s delicious, crab-stuffed snap peas—an appetizer that really snapped along with the wine.

We moved into the reds with a 2009 Merlot that was earthy and nicely intense with smooth, soft tannins on a long somewhat spicy finish.  The group selected this as the #1 red wine of the evening and also the #1 best buy of the evening (selected only by consumers on the Council) at $10 per bottle.  Todd prepared a colorful charcuterie platter, including pates, salamis, cornichons, and cheeses that dramatically enriched the wine.  Also Tom Plant’s spicy sausage (Mad Mike’s Tri-Pepper sausage courtesy of Mad Mike) went very well with the Merlot, although it was intended to match a Zinfandel we tasted later.  This wine would also match well with pork chops, grilled red meats, and flavorful hard cheeses. Our next red was a Red Blend, produced from Zinfandel, Merlot, and Petite Sirah grapes, mostly grown in Lodi.  Again this wine would go well with hearty meats but also matched perfectly with Karsten’s stewed fig tarts—a scrumptious dessert made from figs that had simmered all day in red wine, cinnamon, nutmeg, and honey.  Karsten served his stewed figs in tart shells made from pie crust topped with goat cheese and a walnut. At $11 a bottle this is another high quality, reasonably priced wine.

We then tasted a 2011 Cabernet Sauvignon that Linda paired with a “Fantasy Chocolate Platter,” which included salted chocolate, caramel nut delights, Tahitian vanilla caramels, chocolate-covered grapes, dark sweet dried cherries, cocoa truffles, and blackberries.  (Most of these decadent treats were purchased at Trader Joe’s.)  The wine was lush and mellow with deep black currant and rosemary flavors.  While it would also go well with exotic meats, like venison or elk, it also paired exceptionally well with the desserts.

The final wine of the evening was a 2011 Zinfandel, another well-priced, pleasant wine at $12 a bottle.  Its deep, fruity flavors, including raspberry and strawberry, came 100 percent from Lodi grapes.  It really popped with Tom’s spicy sausage and also enhanced the cheeses on the table, including a delicious, creamy French cheese called Le Delice des Bourgogne.

This was the most reasonably priced evening of wine tasting I have attended.  If I had not known the prices ahead of tasting, I would have guessed them to be in the $20 range. I highly recommend these wines for a backyard BBQ, a winter potluck, or an event where you need to buy large quantities.  And, by the way, the cocker spaniel must have received a few sausage treats under the table because she was snoring contently in front of the fire at the end of the evening.  It’s too bad she couldn’t try any of the wonderful wines.Tin Roof Cellars wines can be purchased at Farmstead Market in Murrieta in Southern California, located at 41516 Kalmia Street.  They can also be ordered by phone at 951-837-2222.  In a few weeks, there will be an e-commerce site where wines can be purchased online.