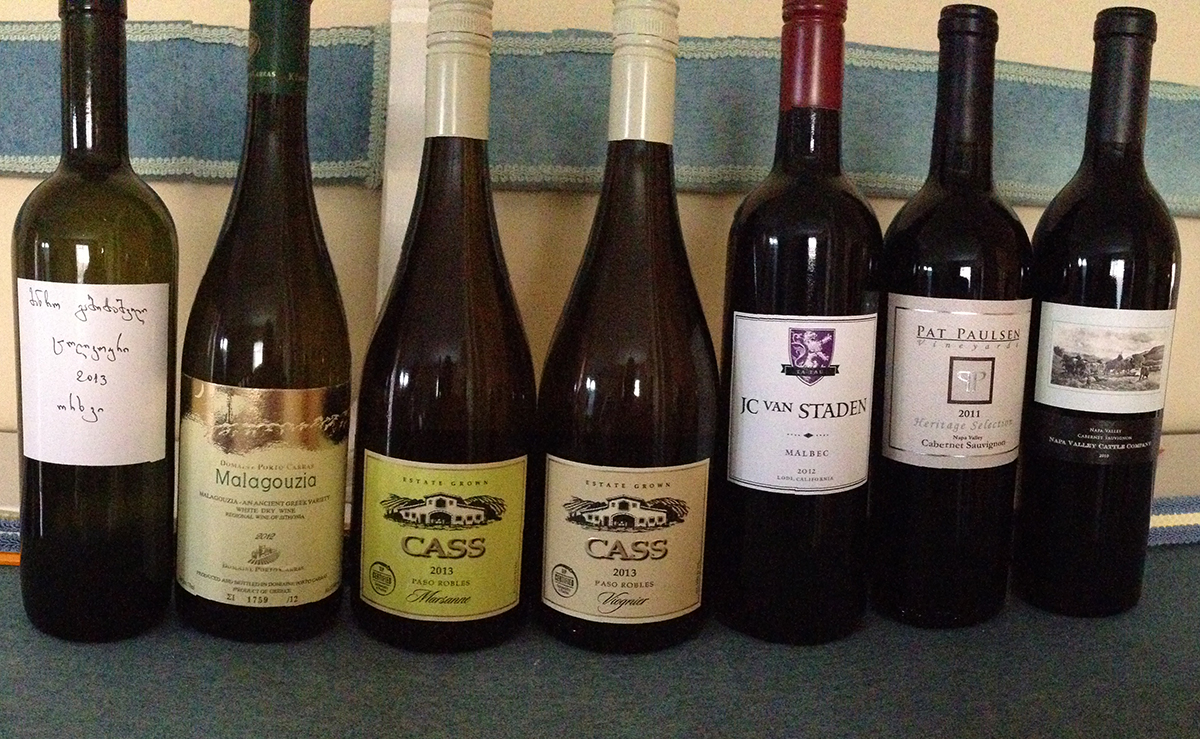 A Time For Tasting

What have we had in our glasses recently? Lots of good juice, that’s for sure. We assembled at Kim and Brian’s house. Glasses in hand and food on our pla tes, we began our tasting.

We’ve enjoyed some excellent wines from Hearst Ranch Winery in Paso Robles lately and we began with their 2011 Three Sisters Cuvée, a blend of 80% Grenache Blanc and 20% Viognier. Chris said it was citrus forward with lots of grapefruit, hints of peach and apricot and thought it was lively with a crisp finish. He gave it four out of five stars. Jan found it very well-balanced with hints of apple. Cindy called it a great pool wine with pineapple and nectarine on the nose. I liked the golden color and round mouthfeel. It averaged just under four stars and you can buy it for around $20.

Next we tasted Dry Creek Vineyard’s 2013 Fumé Blanc from Sonoma. Brian felt it was pleasantly fizzy on the tongue, but a bit on the sweet side for him. Cindy found a grassy nose with some green pear. She felt it was good for the $12 price, but didn’t pick up much “fumé.” I thought it had a very expressive nose with creamy lemon on the palate. It averaged just over three stars.

We tried the 2010 Wente Pinot Noir from Livermore. Jan called it a nice, fruit forward Pinot with cherry and black pepper. I thought the pale color was spot on for a Pinot and enjoyed its softness on the palate and long finish. Cindy noted cherries, strawberries and very ripe raspberry and loved it for the $17 price. It scored a little better than three stars.

From Cass Winery in Paso Robles we tasted the 2012 Mourvedre. Brian said it was very rich and very American with dark chocolate and dried fruits. Chris remarked on the pale ruby color and fruit forward nose and liked the tannic balance and long, smooth finish. Said Cindy “Wow! No Marlboro man wine here! Finishes strong, like dark honey poured on a well-worn saddle. Our group gave it an average score of over four points and it retails for $27.

We tried the 2012 Intertwine Winemakers Reserve Red next. An anonymous taster said ” Nicely done. Thanks heavens it isn’t a typical California Cab.” Not everyone agreed. Jan found it weak on the palate without much finish. Brian called it inky, tannic and mouth-drying. It sells for $20 and scored an average of less than three stars.

We ended this evening with the 2012 Avalon CAB. No one was terribly impressed with this wine. A few said it smelled liked Luden’s cherry cough drops. Brian called it intensely sweet and fairly unpleasant. It didn’t win any fans and barely scored two points. It retails for $10. Our next get together was Jake and Maureen’s home. If you take a close look you’ll see a hand-written label on the bottle on the left. Perhaps one of my Georgian friends can translate. It’s a wine I brought back from the republic of Georgia, one of 28 bottles produced. It got raves from the tasters and I wish I could get more.

I’ve been fortunate enough to taste scores of Greek wines this year and on this evening we started with the 2012 Malagouzia from Domaine Porto Carras. A Greek varietal, this wine has an expressive nose and nice mouth-feel. Chris liked the citrus nose and palate of buttery apricot and lemongrass. He enjoyed the acidic balance and smooth, lingering finish. Brian thought it was “quite pleasant.” At $15 he thought it was a great buy. It scored close to a four star average.

Next was the 2013 Cass Marsanne from Paso Robles. A Rhône varietal typically used in blending, Brian said “This I like a lot. Coats the mouth with oily fruit flavors and shaved wood… Terrific value.” Ken noted lemon on the nose with a mild palate and long finish. Cindy got fruit cocktail on the nose and lemon and grapefruit on the palate. It averaged just about four stars and it sells for $25.

We tasted another Cass wine, the 2013 Viognier. Al liked the nose with its hint of melon. He expected a bit more fruit on the palate. Chris loved the color and the intense fruit on the nose and the wine’s structure and balance. Cindy would enjoy this wine with mahi-mahi grilled tacos with pineapple salsa. It averaged between three and a half and four stars and it’s priced at $20.

From Naked Wines we tasted the 2012 JC Van Staden Lodi Malbec. Ken loved its garnet color and cherry and licorice on the nose. He called it pretty smooth. Chris thought it was lively with a good structure for the $11 price point. Al loved the cherry tones and thought it was wonderful. It averaged a four star score.

You may or may not recall Pat Paulsen from the TV show Laugh In. Paulsen ran for president a couple of times and also started his own winery, Pat Paulsen Vineyards. His son Monty has resurrected the label and we tasted two of his wines. The 2011 Heritage Napa Valley Cabernet Sauvignon was full of cinnamon and clove and very spicy. Brian called it dark, velvety chocolate, a smooth, sexy wine. Cindy loved the color and found caramel, deep purple plum, cinnamon, chocolate, cloves and apple pie. Robb said it was excellent. It got several perfect five-star scores and most thought it was a steal at $26.

Our last wine of the night was the 2010 Napa Valley Cattle Company Cabernet Sauvignon, also from Pat Paulsen Vineyards. This one got raves from the group, too, along with a handful of perfect five star scores. Al loved the nose and inky red color and called it the best wine of the evening. Ken said “smooth, smooth, smooth, a fabulous Cab.” Chris thought it was perfectly balanced. It sells for $49.

Tom Plant launched WINEormous in 2009 and is a member of the International Food Wine and Travel Writers Association. He is based in Temecula, California and offers intimate winery tours for no more than seven people. Tour details and pricing are available at www.temecula-tours.com. Call now to book your Temecula Winery Tour at (951) 907-9701! Ask about special discounts.