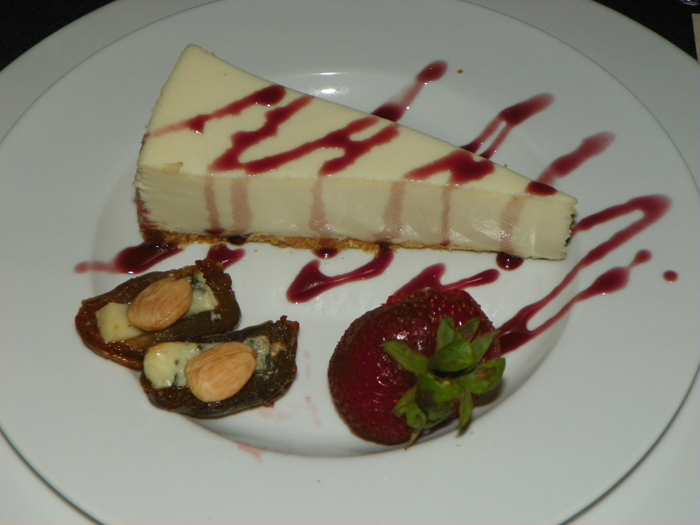 After a jam-packed 1st day with the 11 other winners of the WBC or Bust contest, we left Seattle’s Renaissance Hotel and headed west towards Walla Walla. 8:00 came early, but being the troopers we were we sucked it up, hopped on the bus and prepared ourselves for the day’s first stop: Cave B Estate Winery. Cave B is located in Quincy, WA and overlooks the Columbia Gorge. About a dozen wineries were pouring for us including Cave B and Cedargreen Cellars. Owner/winemaker Kevin Cedargreen joined us on the bus ride from Seattle and told us about the vertical Chenin Blanc tasting he had planned for us. Other wineries on hand were St. Laurent, Syncline, Hard Row To How, Fielding Hills, Camaraderie, Arbor Crest, Col Solare and a few others. I was intrigued by Syncline’s Grüner Veltliner, an Austrian varietal and found it to be similar in style to Riesling – crisp and refreshing with a citrus nose. I also enjoyed Cedargreen’s Chenin Blanc vertical and was pleased to be able to try Col Solare after hearing about them at Chateau Ste. Michelle. My new friend Dave from Toledo Wines and Vines and I decided to stretch our legs and walk around the property and down to where we were able to get a magnificent view of the Gorge. We walked past several of Cave B’s 30 guest rooms and were duly impressed by how beautiful this property is. In walking through the vineyards, I was stunned to see the grapes were just starting bloom. We boarded our bus, stopped for giant burritos at Garcia’s Mexican Restaurant in Prosser before heading to Milbrandt Vineyards at the Vintner’s Village for yet another grand tasting.

The sun was out and it was hot. A fantastic array of hors d’oeuvres awaited us on the patio while a guitarist serenaded us and folks from the various wineries brought their wines to us. Willow Crest, Gilbert Cellars, Thurston Wolfe, Owen Roe, Cultura, Knight Hill and of course Milbrandt were among the wineries pouring for us. Watch for these labels. They are making quality wines. Co Dinn, Director of Winemaking for The Hogue Cellars, joined us on the bus as we left Prosser and headed for our ultimate destination: Walla Walla. Co led an interesting discussion about screw tops (he’s a big fan) and shared some late harvest Riesling with us.

We rolled into Walla Walla about 7:00 and pulled into Walla Walla Vintners. A beautiful array of pizzas cooked in their brick oven awaited us along with some wine and ice cold beer. Watching the sun set over the vineyards and lavender took my breath away. The pizza was some of the best I’ve ever tasted, the wine (Cab Franc in particular) was excellent, and after a nice visit a few of us left to accept an invitation for a private party at Basel Cellars. I wasn’t quite prepared for what awaited me at Basel Cellars. It’s a grand estate with an enormous guest house and a “man cave” downstairs. Several of the female visitors decided to see how many could fit in the tub in the master bath. Appetizers were plentiful as was the wine with Dusted Valley and a few other pouring alongside Basel. Justin Basel then led us outside and down to the barrel room where he served us barrel samples of their first vintage of Malbec and a Syrah. The long day was winding down and it was time to head to The Inn at Abeja for the night. Inn and Winery at Abeja

I checked into the “Chicken Coop”, but don’t let the name fool you. This is one of the nicest rooms I have ever stayed in, spacious and loaded with charm. Innkeeper Mary was gracious in receiving me well past my appointed time. The following morning she cooked me a delicious breakfast of cinnamon rolls and Eggs Benedict and then owners John and Molly let Michael Bottigliero, the Windy City Wine Guy and me taste their incredible wines including the yet to be released 2007 Reserve Cabernet Sauvignon. John gave us a tour of the winery and vineyards and then, when they learned Michael was a fan of Tamarack Cellars, not only arranged a visit there, Molly drove us. The Inn at Abeja is truly spectacular and if you find yourself in Walla Walla, you’ll kick yourself if you don’t visit. Molly took us to Tamarack Cellars where we met Winemaker Ron Coleman and assistant winemaker Danny Gordon and Sandy Kleck. I was not familiar with Tamarack, but after tasting there I am a big fan. After five days and dozens upon dozens of wineries, I found Tamarack’s lineup to be the best across the board. Their “Firehouse Red” and Cabernet Franc were sensational. Ron was busy cooking curry and we had a wine bloggers conference to attend, so we said our thank yous and goodbyes. Molly took me to the Fat Duck Inn and let me drop off my bags and then we set course for the Marcus Whitman Hotel, headquarters for WBC10. The Wine Bloggers Conference it self was incredible. The Washington Wine Commission and the various wineries knocked themselves out dazzling us with food and wine and the staff at the Marcus Whitman did a remarkable job. Highlights of the weekend included an evening stroll through Walla Walla’s lovely downtown with visits to many of the tasting rooms. Saturday we boarded 15 yellow school buses each bound for different and undisclosed vineyards and wineries. Our first stop was at Les Collines Vineyard,  where Norm McKibben led us on a tour of their spectacular property followed by a tasting of Amavi and Gramercy wines. We then stopped at Reininger Winery where we tasted a sensation Chardonnay and then sat in on panel discussion with Chuck, Ron Coleman and Doug Roskelley from Tero Estates. I loved Ron’s comment about Cabernet Sauvignon. He says it’s herbaceous by nature, but people don’t want it to taste that way. He likens it to wanting orange juice that doesn’t taste citric. We wrapped up the bus tour with a visit to Northstar Winery where we enjoyed a delicious lunch and then a tour and tasting with winemaker David “Merf” Merfeld. After the conference wrapped up on Sunday, the weary winners boarded the bus for the final time as we made our way back to Seattle. We had one last stop, however, at Alexandria Nicole Cellars in Prosser. Owners Jarrod and Ali Boyle sent us off in style with a tasting of their excellent wines and a savory lunch prepared by Chef Brad Smith. Jarrod sent us home with a bottle of wine (I chose the Jet Black Syrah, deep and smoky) and we pointed west to Seattle where we got caught in a two hour traffic jam. It was a week I won’t forget and I look forward to a return visit to Washington’s magnificent wine country.