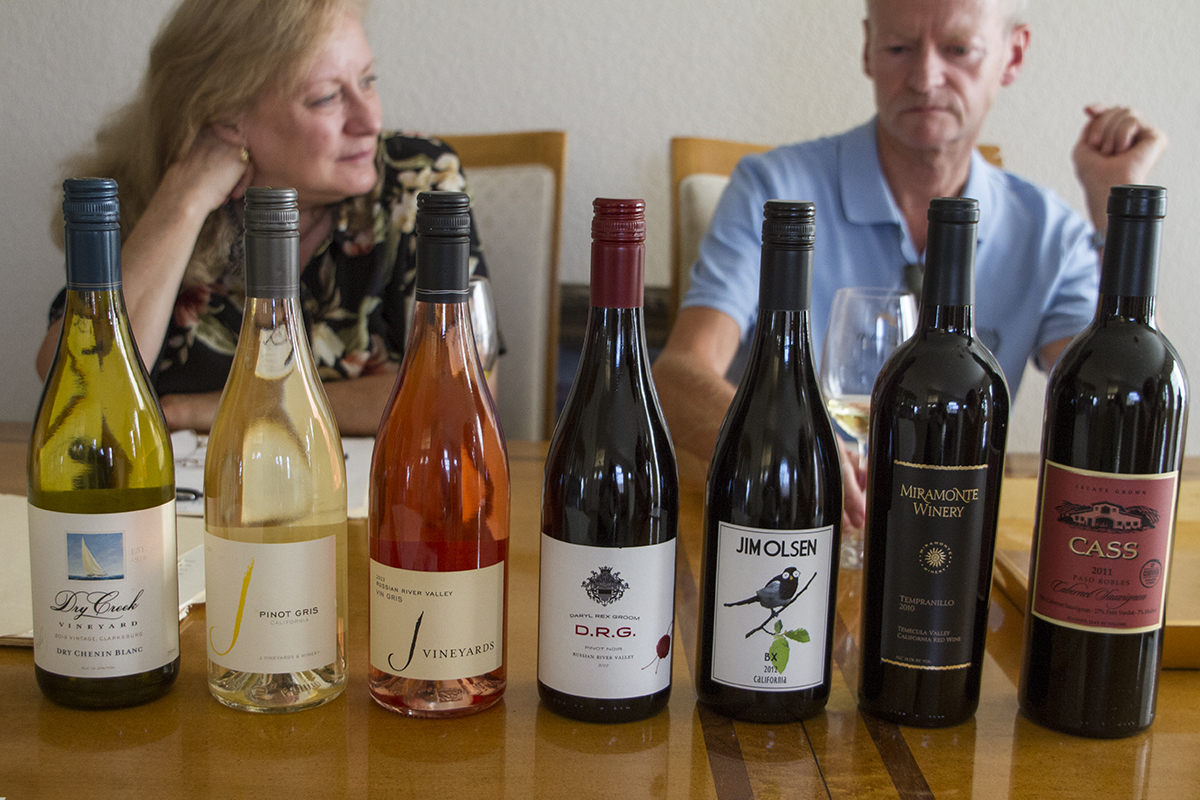 Disclaimer: Most of the wines we tasted were provided at no cost.

We’re still at it, our valiant group of wine tasters. Meeting almost every week, it’s interesting to see relationships develop all over the love of wine and food. It’s become almost more about being together than it is about the wine. Don’t get me wrong, we all love wine and look forward to what we’re going to taste each time.

We gathered in early june and began our adventure with the 2013 Dry Creek Vineyard Chenin Blanc. Chenin Blanc is one of my favorite white grapes and I’m sorry more wineries don’t produce it. Chris liked its amber color and tropical fruit that coated the palate as well as the smooth finish. I loved the nose, picking up banana and tropical fruit. Brian said it was light and floral and slightly spritzy. All agreed it was a great value at $10 and it averaged three and a half out of five stars.

Next up was J Vineyards 2013 Pinot Gris. Debi found it light and clean and liked the grapefruit and melon on the nose. Ken called it an alcohol-infused melon. I found the nose extremely expressive and thought it was very well-balanced. Chris got apricots and citrus on the palate and found it light and lively. It got an average score of a little better than three and a half stars.

J Vineyards 2013 Vin Gris was next up and it garnered mixed reactions. Brian said “I like this. Astringent and bracing, like the beach in the morning when the waves come in.” Ken didn’t care for it initially but after time in the glass he raised his score from 2.5 to 3.75. I loved the pale pink color and strawberry nose. It sells for $16 and got an average of three stars from our group.

From Naked Wines we tried the 2012 DRG Pinot Noir from the Russian River Valley. Debi gave it four stars and called it a great Pinot for the $15 price. Brian said it tasted of peppered strawberries with a touch of fresh cream. Ken said “Wow.” He liked the light palate and its complexity. Chris gave it four and a half stars and found it nicely balanced with a good finish.

We tried another Naked Wine, Jim Olsen’s 2012 BX. Amy found it “atrocious”, but Chris thought it was brawny and well-balanced. Abi  liked the tannins and medium-bodied finish. Ken said he wasn’t thrilled with it. At $12 it averaged right around three stars.

It’s not often we taste a Temecula wine, but this evening we checked out Miramonte’s 2010 Tempranillo. Chris called it a vibrant wine full of spicy red fruit. Brian said “It’s comforting and reminds you of old books in wooden cases that you looked at but never read.” Ken gave it 4.75 stars and found it very polished. At $39, it scored nearly four stars.

We wound up the tasting with Cass Winery’s 2011 Cabernet Sauvignon from Paso Robles. Chris said the aromatics were huge. He found cinnamon and cloves with notes of currants, cassis and plum. He gave it a perfect five-star score. Brian loved the color and mouth appeal, but didn’t think it was deep “and for $45 it should be.” It was Ken’s favorite wine of the night.

Our next get-together was overlooking the vineyard at Tony and Alisa’s house in Fallbrook. On a warm summer evening, we started the tasting with a 2013 D ry Creek Vineyard Sauvignon Blanc. Chris found it crisp with an apricot and citrus nose extending to the palate. Alisa liked the “peachy” nose and thought it was well-balanced and a good value at $17. It averaged better than three and a half stars.

Cass’ 2013 Oasis Rosé from Paso Robles was next. Ken said it was quite dry with some pepper. Tricia couldn’t find much nose, but thought it had a smooth finish. Al thought it was very nice. It sells for $22 and scored about three stars.

We tried two more offerings from Naked Wines. The 2012 Bonny Doon Vineyards GSM had cranberry and raspberry on the nose. I liked its balance and lingering finish and loved how food-friendly it was. Alisa said “I want a case!” Chris liked the ruby color and cherry, cranberry and currant components and thought it was a great buy at $11. A hit with almost everyone, it scored nearly four and a half stars.

Next was a South African wine, the 2013 Arabella Shiraz. Ken called it smooth and very deep and luscious on the palate. Tricia called it smokey with bacon. Mike noted its rich nose and big, bold cherry taste. I liked the dark cherry and plum nose and its mouthfeel. Chris enjoyed it, but said he’d like to taste it again in two or three years. At $12 it scored nearly four out of five stars.

Next up was the 2009 Dry Creek Vineyard Old Vine Zinfandel. Tricia said it was “incredible.” Justin found it perfectly aged and priced well at $30. Al picked up pepper and spice and liked the smooth, long finish. Alisa and Tony both found it smooth and Alisa said it was nicely balanced and super drinkable. It scored better than four stars.

In what I refer to as “the year of Greek wine”, we finished up with the 2010 Magnus Bacatta from Domaine Porto Carras. This Cabernet Sauvignon/Syrah blend is definitely old-world in style. I loved the structure of this wine. Chris noted big dark berry fruit with hints of orange and currants. He thought the tannic balance was excellent and found the finish long and satisfying. This $28 wine averaged close to four and a half stars. See you next time. Cheers!