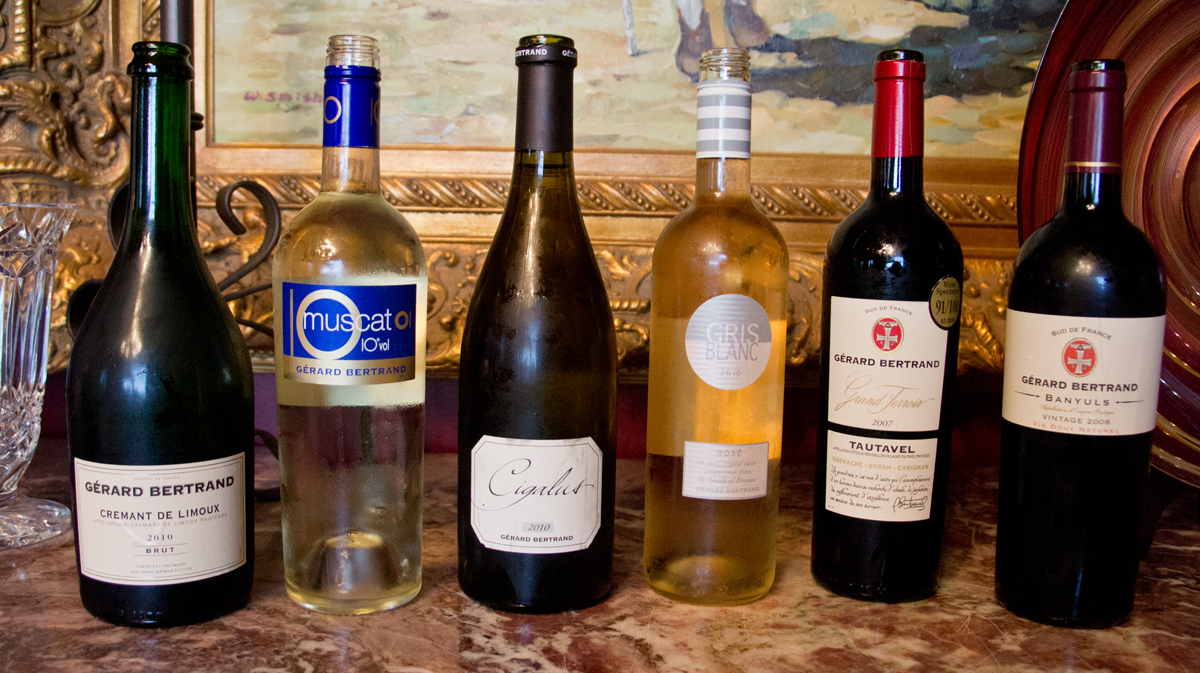 Tasting the Wines of Gérard Bertrand Have you ever tasted a potato chip cookie? Not only had I never tasted one until recently, I’d never heard of such a thing. At our most recent gathering of the Occasional Wine Council, that was one of two pairings offered by Corie as we tasted the “affordably French” wines of  Gérard Bertrand. The first wine we tasted was the 2010 Crement de Limoux. The potato chip cookies and a savory smoked salmon and caviar pizza were offered as pairings for this Chardonnay based sparkler. The Cremant had a yeasty, elegant nose and plenty of small bubbles. I thought the pizza was a pairing made in heaven and also enjoyed it with a triple creme Le Délice de Bourgogne cheese. If you want some bubbles without breaking the bank, check out the Cremant de Limoux for around $15.

The 2011 Muscat 10° Dry Sparkling was next in the lineup. I’d hesitate to call it a sparkler, to me it was more of a frizzante. The beautiful floral aromatics offered hints of roses. It was quite dry for a moscato, but the fruit certainly wasn’t bashful. Ginger offered us  ginger chicken and cream cheese with pesto and sun-dried tomatoes, and both dishes complemented the wine wonderfully. The moscato is priced at $14 and I’d love to try it with some spicy Thai food. Our next wine was a 2010 Gris Blanc – Rosé, although most of it felt it had more of an orange hue to it. The nose was very subtle and this wine showed lots of minerality on the palate, not unlike a Sauvignon Blanc. Carmen had made a beautiful presentation with shrimp and yellow tomatoes on skewers. They were delicious on their own as was the wine, but together it was a misfire. This didn’t seem to be a particularly food friendly wine, but I’d gladly sip a few glasses on its own on a warm afternoon. Retail price is $12.

The 2010 Cigalus Vin de Pays D’oc was next and it was a huge hit. There were lots of oohs and ahhs around the table as council members sniffed and sipped. This wine also had a very soft nose, perhaps because it was somewhat cold, but it danced on the palate. It’s a fruit forward and food friendly with with notes of pear, peach and honey. The mouth-feel was very nice, the wine is well balanced with a lingering finish. Sue prepared a shrimp risotto that paired very nicely as did stilton cheese with apricot. At $34 I highly recommend this wine. The lone red of the day was next, a 2007 Tautavel, a Rhône blend of 50% Grenache, 35% Syrah and 15% Carignan. It was easy to pick up oak on the nose and lots of blackberry and currant on the palate. This wine has pronounced tannins, but they’re not overpowering. My wife Laura prepared a ratatouille to pair with this wine and it was a very nice match. Expect to pay about $15 for this wine.

Appropriately enough the day’s final offering was the 2007 Banyuls dessert wine. My research says it’s a fortified wine made with Grenache grapes. As you might expect it has a port-like nose. Many people are put off by ports and find them too syrupy and sweet. This was neither. It had just the right amount of sweetness for me and at 16% the alcohol didn’t overwhelm it. Ken hit it out of the park by pairing it with vanilla bean ice cream and apricots. I think it’s a steal at $15 for a 750 ml bottle.

I always look forward to meetings of the wine council. It was a real treat to taste the wines of  Gérard Bertrand.