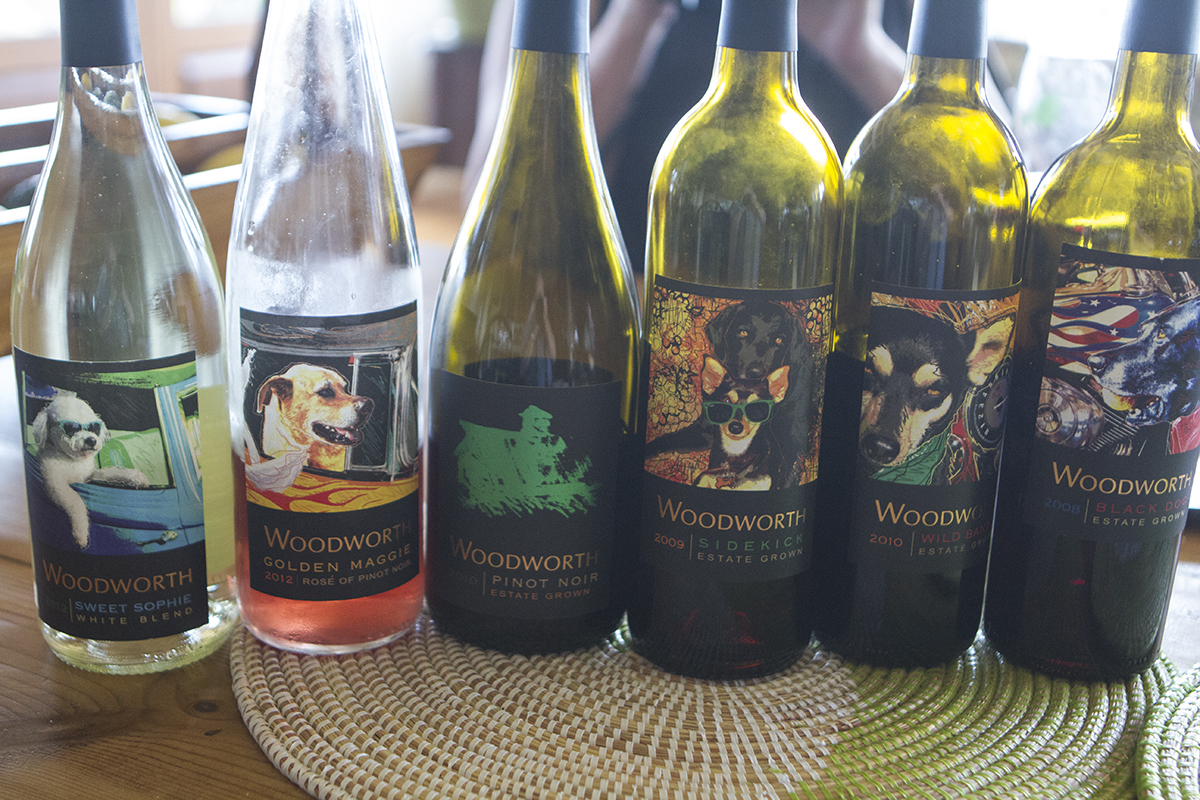 When I heard about a quality Pinot Noir coming out of the Temecula Valley, I was extremely skeptical. I have tasted two Pinot Noirs from the area and they don’t have any of the glorious characteristics of quality Pinots. Woodworth Vineyards, I was told, was not only producing Pinot Noir, but it was good. It was winning awards. Their 2008 Pinot won a gold and finished third in its category at the Pinot Noir summit, competing against wines from the U.S., France, Italy and other renowned wine-producing regions. I met Marlene Woodworth last year in Fallbrook and she invited me to come visit her and her husband Gary at their home in the vineyards above Temecula in De Luz. Time passed and I didn’t get around to it, but Marlene and I kept bumping into each other, finally last week at of all places, the veterinarian. Two friends joined me on a sunny Sunday afternoon as we made our way up to the Woodworth’s 45 acre property. I have been told not to use the word breathtaking unless something literally takes your breath away. The view from the Woodworth’s deck did just that, providing sweeping views of De Luz and Fallbrook. They have a total of nine acres planted to grapes and 2500 avocado trees. We went inside where Marlene had set the table with cheeses, crackers, nuts and a selection of their wines. She first poured the 2012 Golden Maggie, a rosé made from 100% Pinot Noir. Although this rosé was a lovely soft pink, their first vintage was nearly golden, so they named it after Maggie, their golden retriever. Here’s a recipe courtesy of Patrick Bartlett that’s a wonderful pairing with this wine. Ponzu Honey Glazed Salmon on Spicy Miso Rice Noodles with Mango Kiwi Salsa.

As we tasted Gary and Marlene shared their improbable story with us. Gary comes from a manufacturing background and Marlene was in high tech. They fell in love with the property when they first saw it in 2000. It was a vacant lot, nothing but dirt. They lived in the barn for three and a half years while they were building their home. I had to ask the question. What possessed them to plant Pinot Noir? “Nobody was growing it out here. We just had a belief it would work.” They planted Carmenere and Cabernet Sauvignon, but neither varietal did well. Today they grow Pinot Noir, Albariño, Chardonnay, Merlot, Pinot Gris and Viognier. They sold their fruit the first few years. They were under contract with Peter Poole who has a long history in Temecula wine. When they decided to make wine, Gary would take beakers to every winemaker he knew and say “taste this.” Mike Tingley, who has been making wine in this valley for more than 30 years was extremely helpful. When he learned they had made wine in contaminated barrels, he told them to filter it through pantyhose. It worked. They finally teamed up with Tim Kramer from Temecula Winery Management who serves as their consultant. Gary is the winemaker, while Marlene is the blender. Anyone who tells you growing grapes is easy doesn’t know what they’re talking about. Birds, bees and powdery mildew all pose problems and Gary says they typically lose one to two tons per year to bees. They have tried everything with no success so far. Someone told them to punch holes in Bounce dryer sheets and put them in the vineyard. They just wound up with a mess, but Tim Kramer called it the “freshest vineyard I’ve ever smelled.” We tasted others, notably the 2010 Pinot Noir. I love Pinot, as does my friend Robb, and we were both blown away by the elegance of this wine. It’s a classic Pinot. All of the Woodworth blends are named after their dogs, so next we tasted the 2009 Sidekick, a Merlot/Syrah blend, another gold medal winner. Finally we tried the 2010 Wild Bandit, a Pinot Noir/Syrah blend with nuances of both varietals on the nose. It’s drinking very nicely. “This wine is attached to the land” says Patrick Bartlett, and I think he nailed it. The Woodworths have a wine club, now at a little over 100 members, but that number is certain to grow once people learn how extraordinary their wines are. You can taste and purchase their wines at Crush & Brew in Temecula and at Forgotten Grapes in Riverside. They are also available online. They do a blessing of the grapes each year with a pastor blessing the vines followed by a barbecue. They’re hoping to do an annual harvest shrimp boil perhaps as soon as next year. They are active in the community. Marlene has embraced Heros, Cars & Canines on September 7th at Cross Creek Golf Course put on by the De Luz Women’s Club. The goal is to provide wounded veterans with service dogs. The Temecula Valley is blessed to have the Woodworths.