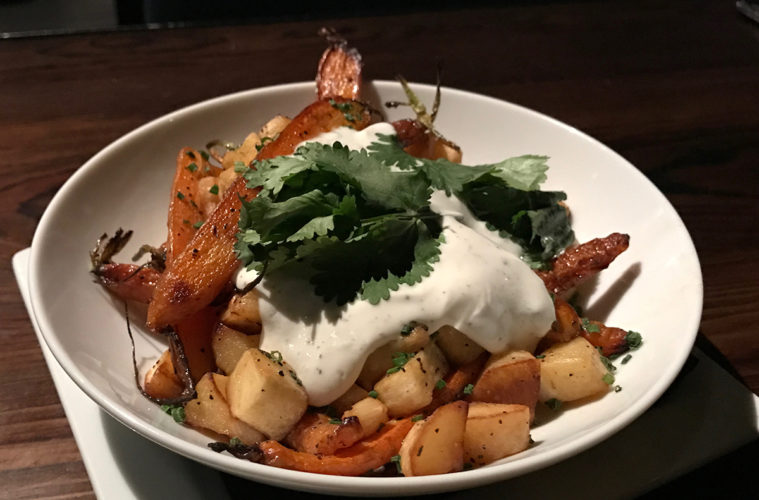 San Diego Restaurant Week begins anew January 15 and runs eight days through January 22nd. My partner Kat and I were invited to enjoy a preview at Decoy on Lake San Marcos. It’s nearly impossible to believe just ten years ago Decoy was in terrible disrepair. When eat. drink. sleep. purchased the property, they went straight to work, investing considerable time and money to turn it into a first class venue. The setting couldn’t be more idyllic. Overlooking Lake San Marcos with floor to ceiling windows everywhere, the views are stunning. You feel almost as if you’ve been transported to a top shelf hunting lodge in Montana. Our server Laurie was a delight. You can tell she’s the type of person who can’t wait to go to work. She told us how much she loves cooking and grabs every opportunity she can to spend time with Executive Chef David Warner, and has even collaborated with him on one of the menu items. We shared with two appetizers, bacon wrapped dates and wood-fired Spanish octopus. The California dates are stuffed with Parmigiano Reggiano then wrapped in bacon and baked, served with saba sauce and an arugula salad. The octopus was braised on a wood fire grill and served with potato-slab bacon hash, sunchoke purée and romesco sauce. Kat enjoyed a Pinot Noir from Blackburn while I sipped a Bonny Doon Grenache. For entrées I chose the rack of lamb, and Kat opted for the Black Garlic and Ricotta Agnolotti, both highly recommended by Laurie. The Agnolotti was the dish Laurie worked on with chef. The lamb was divine, cooked to perfection and coated with a honey mustard pistachio sauce and served atop a smoked potato purée and sliced parsnips along with mustard greens, Tuscan kale and arugula. The Agnolotti disappeared before my eyes as Kat inhaled it with a chorus of oohs and ahhs. We ordered two sides, crispy Brussels sprouts with pecan-rosemary butter and roasted carrots and parsnips with crème fraiche and cilantro. We savored each bite of the elegantly prepared dishes, and I enjoyed mine with a glass of Meyer Syrah from Mendocino County. We weren’t hungry in the slightest, but Laurie insisted we try a dessert so we decided to try the apple & cranberry cobbler and goat’s milk panna cotta. The cobbler was topped with a delectably sweet brown sugar streusel and a scoop of vanilla ice cream. The panna cotta was feather-light, topped with bits of candied orange and port-poached pears. Laurie suggested the perfect wine to pair with dessert, Barth Allure from Germany. Executive Chef Davis Warner stepped out of the kitchen to visit with us after our exceptional meal. His sense of humor became evident right off the bat when I asked where his passion for food began and he replied “when I realized my mom couldn’t feed me the way I needed to be fed.” He actually started washing dishes as a teenager in Wildwood, New Jersey. His cousin was a chef at a tavern and hired him to work there. He wound up falling in love with the restaurant business and attended culinary arts school in Fort Lauderdale, Florida. One of his instructors opened a restaurant and hired him. When he came to Decoy, the kitchen was rusty and he needed to break some “bad habits.” Warner says things just keep getting better and better. He insists on only the freshest produce and works with a select few growers. We enjoyed every moment of our visit to Decoy and I urge you to give this restaurant a try during Restaurant Week. Both a $40 and $50 menu are available, each offering a starter, an entrée and dessert. Decoy is located at 1035 La Bonita Drive in San Marcos. (714) 744-0120