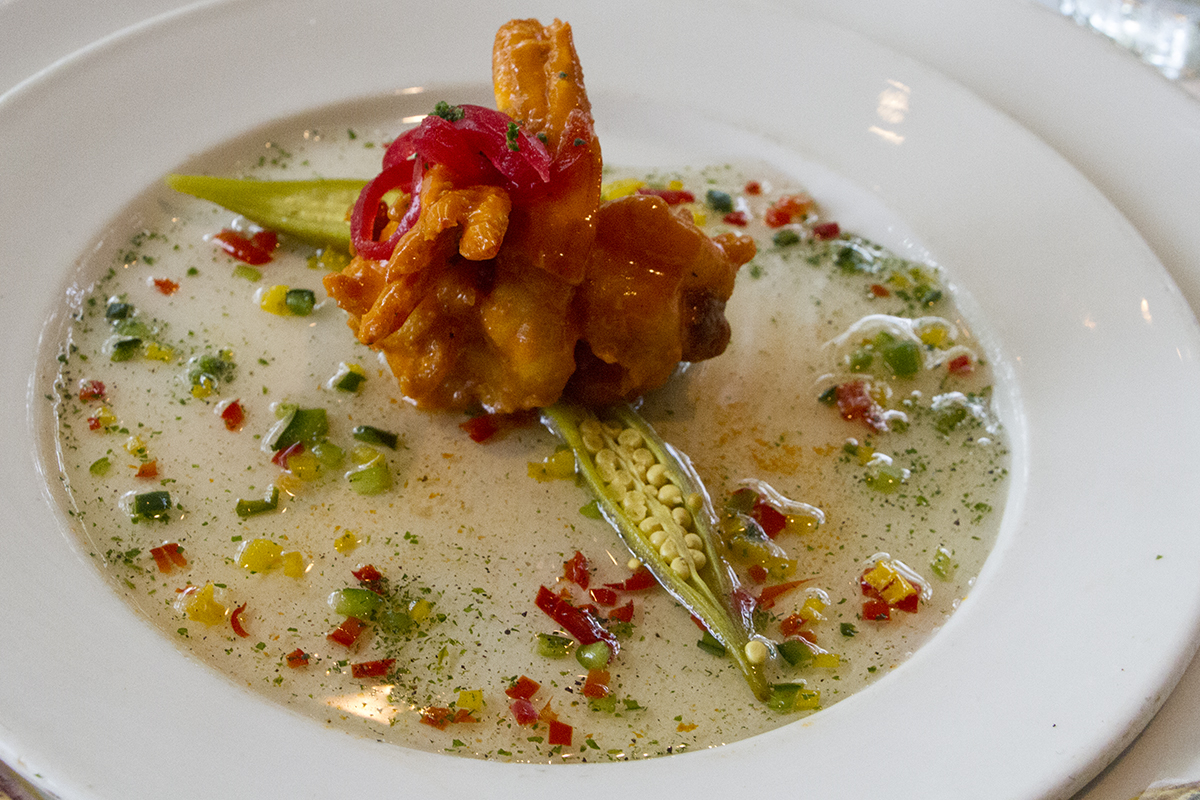 New Orleans – Serving It Up Fresh and Tasty I’ll cut right to the chase. I have an enormous soft spot in my heart for New Orleans. It’s without a doubt one of my favorite places to visit. You may have heard this story so I’ll be brief. Two weeks before I was was set to attend last year’s New Orleans Wine & Food Experience, I slipped and fell at home, rupturing my left quadriceps. I think one of the reasons I recovered so quickly is that I was bound and determined nothing was going to stop me from attending this year. 2013 marked the 21st anniversary of this grand event. Arriving late at night, I took the shuttle from MSY airport to the French Quarter and listened raptly as our driver spoke with pride about his home town and gave us recommendations on where to go and what to do while in the Big Easy. I checked into the historic Monteleone Hotel, took the short stroll to Bourbon Street, soaked in the sights and sounds while sipping a daiquiri and called it a night. I had been invited to lunch the following day and we met at Commander’s Palace, where Executive Chef Tory McPhail is the proud recipient of the James Beard Foundation 2013 Best Chef of the South award. I always love having the chef select your meal for you, so we let Chef Tory do just that. Our waiter hand printed what we were served. it’s no mystery to me why he has received the acknowledgement he has. Every morsel was magnificent. My dining companions were in New Orleans for the event and they represented Handcraft Artisan Collection wines. I sat next to winemaker Alicia Ysais and she matched her wines to Chef Tory’s food. Her Inspiration White (to be released in the fall) is a blend of Riesling, Sauvignon Blanc, Viognier, Moscato and Pinot Grigio. It was an ideal match to Chef Tory’s gumbo and his crawfish beignets. We also enjoyed her 2011 Chardonnay, 2010 Pinot Noir, 2010 Cabernet Sauvignon and finished with the 2010 Petite Sirah, a big, dark, in your face wine. It was a meal I will remember always and Alicia’s wines stood up magnificently to Chef Tory’s mouthwatering dishes. Later that afternoon it was back to the Monteleone for Vinola, an event limited to 200 wine lovers who enjoyed wines from 40 wineries all with a retail price of $75 and up. Food stations were set up with tastes from nominees for the People’s Best New Chef Award from Food and Wine Magazine. I checked out the one of a kind Carousel Bar, which does a full rotation about every 15 minutes.

Next on the agenda was the Royal Street Stroll, which, just as the name implies, is a stroll down Royal Street led by the renowned Krewe of Cork. Food and wine stations were as abundant as the Mardi Gras beads, and were set up not only in the street, but in galleries and shops as well. It was noisy, tasty and a bundle of fun. I discovered Louisiana Bistro two years ago during Jazz Fest. When your waiter comes to your table, if you say the magic words “feed me”, Chef Mars will come out from the kitchen, sit down with you, ask you a few simple questions and then end the conversation by asking if you want three or four courses. I couldn’t wait to go back. Chef Mars sent out one plate after another until I finally said “I surrender!” We started off with breaded frog legs in a lemon butter sauce, moved on to a crab stuffed mirliton, followed by grilled escarole on a bed of vegetable slaw, beef ribs with beans, rabbit creole on rice and all topped off by Creole cream cheese ice cream with fresh berries. I have no doubt had I not waved the white flag they would still be bringing me plates. Yet another unforgettable meal. Food and wine seminars were held on Friday and Saturday and featured pairings, sparkling wines, an Asian Cajun seminar with Katie Chin, seafood and a Riedel wine glass demonstration. How much difference can a wine glass make in the way your wine smells and tastes? If you haven’t attended a Riedel demo, it will blow your mind. Friday afternoon was capped off with an Israeli Street Foods fair behind the Marriott Convention Center on Fulton Street. Grand tastings were held Friday and Saturday at the New Orleans Convention Center and were like nothing I had ever before witnessed.
The cavernous convention hall was filled with tables of food, wine, beer and spirits. The best of New Orleans and more all in one spot. It was enough to make my senses reel. I had met Brian Landry, Executive Chef at Borgne, a John Besh Restaurant at the Tide to Table seminar. He graciously invited me to dinner and an after party with John Besh. When asked by the waiter if I wanted chef to select the menu for me, I instantly said yes. Oysters on the half shell were the first order of business, followed by an appetizer trio: duck poppers with jalapeño and bacon, smoked pork empanadas with white barbecue sauce and goat cheese a la plancha. A seared tuna salad followed and for my entrée I was presented with fish in a bag, a lovely gulf fish with fennel,  caramelized onions and crab fat cooked in a paper bag which is cut open at the table. The focus here is clearly on fresh, local seafood and Chef Landry more than does it justice. Borgne is a restaurant I can recommend highly to anyone in the New Orleans area. Chef John Besh came in after the restaurant closed to the public for the “Funkin’ It Up” VIP party. A gracious host, he pressed flesh and made the rounds. The 22nd New Orleans Wine & Food Experience is slated for next May. My dream? Catch the second weekend of Jazz Fest and stick around for NOWFE. Hmmmm, sounds like a plan.