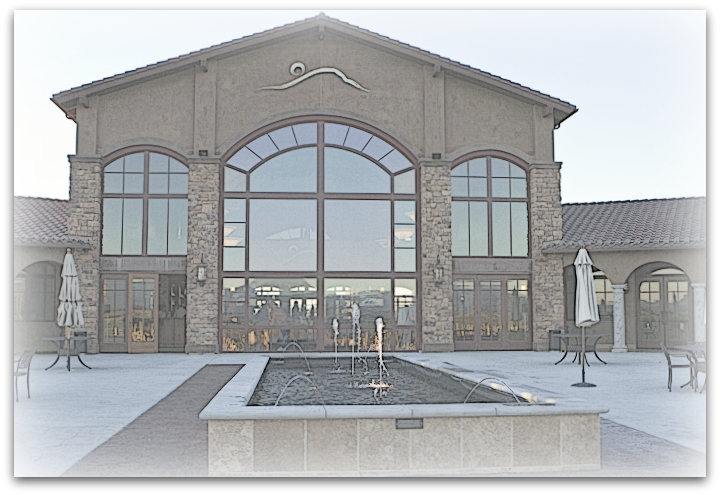 Monte de Oro – For The Love of Wine I recently had the pleasure of sitting down with Ken Zignorski, managing partner at Monte de Oro Winery in Temecula.  Monte de Oro is a relative newcomer to the Temecula wine scene, having opened their doors to the public at the end of 2009. With 14 months under their belt, I was anxious to learn about this beautiful winery and see how they are becoming a part of this growing wine community.

The idea for Monte de Oro was born in 2001 as a group of investors with a common love for wine decided they wanted to grow grapes in Southern California. Most of them were intrigued by wine and the romance of the wine business and “thought it would be cool.” By summer, 2005, the partnership had grown to 65 members. Realizing their real estate dollar would go further in the Temecula Valley than it would in Napa or Paso Robles, they started buying vineyard land in 2002 and planted the 18 acre Vista del Monte vineyard with Syrah and Cabernet Sauvignon. In the spring of 2003, they planted the De Portola vineyard with Cabernet Franc, Merlot and Viognier as well as the Galway vineyard with Zinfandel, Chardonnay, Pinot Gris, Sauvignon Blanc and Muscat Canelli. The Monte de Oro vineyards were planted in 2007 primarily with blending grapes; Petite Sirah, Tempranillo, Mourvedre, Grenache and Cinsault. They now have 72 acres planted with a goal of producing strictly 100% estate wines in the near future. In 2004, they harvested their first grapes and sold them to Leonesse Cellars. Winemaker Tim Kramer made a single vineyard Syrah with that fruit and got a 90 rating with it. Not bad for a first harvest. Monte de Oro’s parent company is OGB (One Great Blend) Partners. “We want to make the best wine we possibly can in Southern California.” With the idea that everything they do is focused on wine, they hired Tim Kramer as their principal winemaker and brought in Tom Eddy from Napa as a consultant. Shovels broke the dirt in October, 2007 and the building was christened in November, 2009 with a soft opening in December and a formal grand opening on January 11, 2010.

The facility itself is a knockout. They hired DZN Partners, a two person shop out of Encinitas to design it. The only guidance they were given was to incorporate the sweeping panoramic views. DZN returned with their preliminary design and the partners decided they didn’t need to look at anything else. They nailed it. The only change they made, after viewing the site from the air, was to expand the patio from a proposed 3500 square feet to 10,500. It was indeed a wise move as the patio is an ideal setting for events of all types. Monte de Oro hosts monthly jam sessions on Sundays as well as other concerts and they hope to expand on that. They’ll do another 4th of July concert this year and hope to host Big Bad Voodoo Daddy this August or September. They showed Rocky Horror Picture Show last year with a costume party and this year they’d like to throw a toga party and screen Animal House.

I was impressed last year when the Temecula Winegrowers Association hosted the first Wine & Culinary Showcase at Monte de Oro. 31 wineries participated, starting off with a roundtable discussion featuring several of the valley’s winemakers. The patio was used to good advantage as guests sampled food and wine and spent time visiting with winemakers, winery owners and chefs. The 2nd annual showcase is slated for this September at Monte de Oro. Nearly 500 people attended the inaugural event and a much larger crowd is expected this year. Ken told me one of the things that has appealed to the partners so much is the sense of community here. “We’re all here for the grapes.” It’s not uncommon to see winemakers helping each other out when the need arises. I asked how they are giving back to the community and I learned they are doing so in several different ways. They donate a lot of wine to charities. They recently hosted a breakfast for the upcoming Reality Rally which will benefit Michelle’s Place, a breast cancer research center. He also believes the building adds to the value of the Temecula Valley. “We’re here to help contribute to the continuing evolution of the valley.” The 68 partners hail from 23 states including Colorado, Ohio, Pennsylvania, New Jersey and New York, and Zignorski says the partners are in essence ambassadors for Temecula wine, introducing Monte do Oro wines to places that otherwise wouldn’t know about Temecula. Their wines are now on the menu at Del Friscos in Denver and they were one of few Temecula wineries invited to pour at the upcoming Culinary Evening with California Wine Masters for Cystic Fibrosis at Warner Brothers Studios. Monte de Oro has come a long way in a short time.

Ken believes the Temecula Valley needs to keep pushing the curve, striving to be better. Now that they’re well into phase 1, the next goal is to make wine on site. They want to build a crush pad and set up a gravity flow operation down the hill in back of the winery. He says the time they had while they were waiting for the grapes to develop and for the building to be completed allowed them the luxury of being able to give their wines a full two years in French oak barrels and adequate time in bottles before releasing them. All the reds with the exception of Zinfandel are aged in 100% French oak. The Zin ages in 60% American Oak and 40% French. When you visit the winery, you’ll find all of the red wines are poured from decanters. He explains that not only does it make a nice impression, it allows the wines to open up. Monte de Oro’s wines are garnering attention. The 2007 Syrah picked up double gold in the San Francisco International Wine Competition, and they have garnered several other awards. Plan on spending some time when you visit. Make sure you ask if you can visit the barrel room. You can actually look down into it from the spacious tasting room.