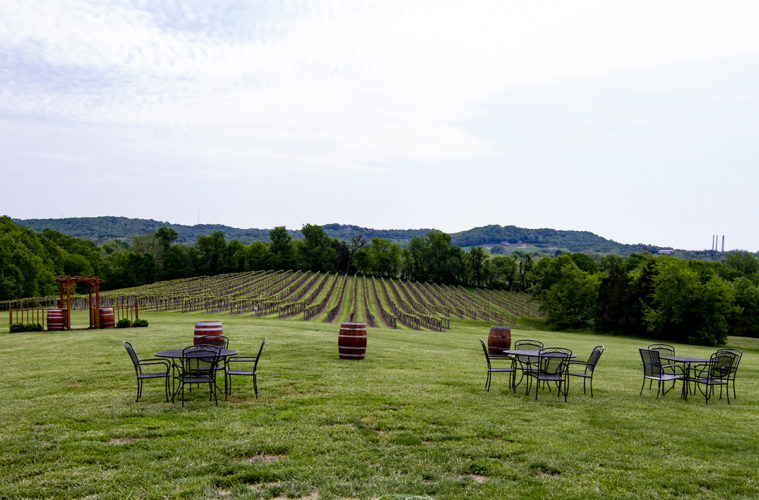 Missouri Wines reached out to me earlier this year to see if I’d be interested in paying a visit to Missouri wine country. I leapt at the chance. I visited Columbia, Missouri and its surrounding wine region several years ago and enjoyed my time there thoroughly. I grabbed a redeye and headed east. I landed in St, Louis and was met by Christa, Annette and Rosemary from Missouri Wines. We boarded a shuttle bus and headed out for our first stop, Stone Hill Winery. Stone Hill first opened its doors in 1847, making it Missouri’s oldest winery. After enjoying a welcoming Methode Champenoise Brut Rosé and some cheese and crackers, senior winemaker Dave Johnson gave us a tour of the grounds and the winemaking facilities. He also shared the winery’s history with us. At its peak, Stone Hill produced 1.2 million gallons of wine annually, more than the entire production in Missouri today. When Prohibition was enacted in 1920, it effectively closed the doors on the Missouri wine industry. All the vines planted at Stone Hill were pulled out. Local farm couple Jim and Betty Held purchased the winery in 1965. At the time, the underground cellars were used to grow mushrooms. Dave worked on a medical research board in Detroit when he learned of an opportunity to get paid to go back to school and work in the wine industry. He jumped at the chance. He saw the winery through many growing pains. They quickly outgrew what at first they believed was an enormous production facility. When making sparkling wines, they went from hand-riddling to mechanical. Disgorging, however is still done by hand. Production today is approximately 300,000 gallons of wine. After tasting a few vintages of their award-winning Norton wine from the barrel, Dave turned us over to current head winemaker Sean Turnbull. South African, Sean displays a clear passion for winemaking. Many of Missouri’s grapes, Vignoles, Chardonnel and Traminette for instance, were completely foreign to him. He learned quickly and is growing to love Missouri wines. Stone Hill produces about 27 wines, from dry whites and reds to sweet and “super sweet wines.” “The whole spectrum,” said Sean. “We try to hit every palate.” We tasted several of them, including Vidal Blanc which he calls an “awesome summer wine” as well as Traminette and Chambourcin, a light red which he feels resembles an Oregon Pinot Noir. I truly enjoyed the wines I tasted and wound up bringing a few home. I was very sad when we finished the last bottle. After tasting we adjourned to an adjacent building, Stone Hill’s Vintage Restaurant,  for more wine and dinner. Christi Miller from Missouri Grown spoke with us about the bounty of Missouri’s agricultural products, many of which we enjoyed on our shuttle. Black walnuts are a specialty, as well as dairy, rice and cheeses. She wants people to make the connection to local agriculture and promotes it through u-pick and other avenues. Winery owner wner Karen Held also welcomed us. Her husband Jon was at a meeting and unable to join us. Dinner was substantial and delicious, but I had had a very long day and was ready for rest! I checked into Alpenhorn Gasthouse and was immediately struck by the warmth and hospitality of innkeeper Adrian Sigrist. This B & B is charming and cozy and I felt right at home. Adrian showed me where the wine was, quite an extensive selection I might add, and where the coffee maker was located. He then took me to my tiny cottage, Das Kleine Haus, German for the little house. With a comfortable bed, fridge, coffee maker and bluetooth speaker, I was all set! I awoke early the next morning and explored the property, meeting the two resident cats, Wiggles and Tan Man on my way around. It’s a lovely hillside property with lush green grass, Norton grape vines, chickens and what I thought were cows. I later learned they were enormous sheep! Adrian and his wife Kate prepared a wonderful breakfast for me, starting with a smoothie, followed by an apple and cranberry pecan bread pudding and an egg and cheese frittata with bacon. Adrian and I had a good visit where he told me a bit of the history of their historic inn. They purchased the former Pelze Nichol Inn in 2003. Alpenhorn in an anglicized version of the Swiss word Alphorn. When they were coming up with a name for the inn, they wanted something as close to the beginning of the alphabet as possible. Adrian knew with his Swiss accent, alphorn would sound more like “all porn,” not exactly the image he wanted to convey. If you’re in Hermann, Missouri, I can’t recommend a place to stay more enthusiastically than I recommend Alpenhorn Gasthaus. After breakfast we set out to explore more of Hermann wine country. I’ll share the rest of the day with you in the very near future.