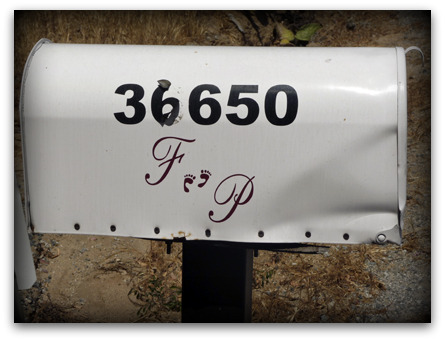 There really aren’t that many wineries in the Temecula Valley (though the number is growing) so it’s always a treat for me to visit a winery here I haven’t been to before. I called Deane Foote a few days ago and he invited me to come visit his small winery. When I arrived, he and his son-in-law were working, building a new horse barn. We sat down to visit and he told me about how Foote Print got started and where they’re headed. Deane began making wine for his family and friends and then he says it “kind of exploded”. He got his winery license in 2005 and now makes about 800 cases of wine a year. About 30% of the grapes in his wines are from his vineyards and he purchases the rest. As the vineyards mature, he plans to add more of his grapes. His farm is certified organic and he sells citrus in the tasting room. It’s literally a mom and pop outfit. He and his wife Christine do everything, from picking the grapes to bottling the wine. Deane has a blend called Footeage (Cabernet Sauvignon, Merlot and Cabernet Franc), another called Krazy Foote (Cabernet Sauvignon, Merlot, Cabernet Franc, Syrah, Petit Verdot and Malbec) as well as Red Foote (Merlot, Syrah and Cabernet Sauvignon). In 2010 he will release his Left Foote, which is literally a blend of all the juice that’s left over. His belief is that “throwing things together” adds complexity. His wines spend a minimum of two years in the barrel before he bottles them. As a small winery, he says he can spend more time with his wine than the “big guys”.

I tasted three of his wines and he makes a quality product. His Petit Verdot has a deep violet color, a beautiful nose and a smooth finish. It’s unusual to see Petit Verdot on its own. If you get the opportunity, I recommend you try some. I also enjoyed his Krazy Foote blend and the 2007 Zinfandel was a Zin lover’s dream. Classic Zin nose and chewy fruit.

When all the permits are approved, the winery will be renamed Foot Path. Whatever you call it, when you want to go off the beaten path, Foote Print is well worth a visit.