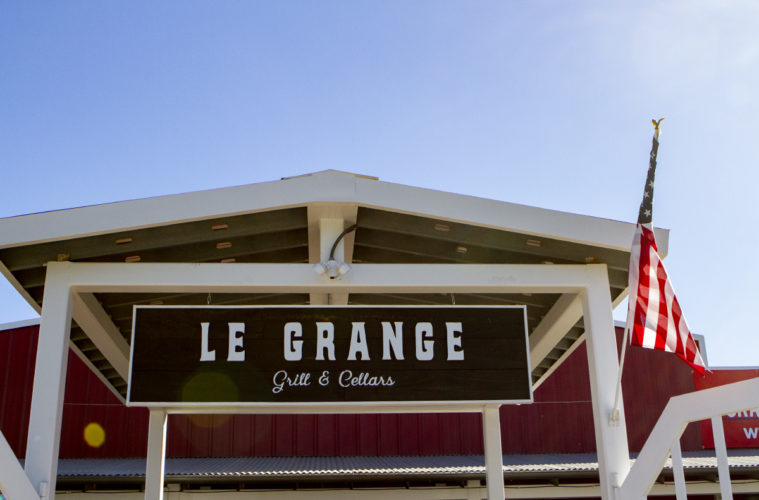 After months and months of navigating miles of red tape and overcoming one hurdle after another, Wine Ranch Grill and Cellars is open for business (and fun!) in Old Town Murrieta. When Doug Wiens learned the old Plowboys was available, a light bulb went off in his head. He initially thought it would make an ideal extension to the family’s Temecula brewery. It just seemed like a beer place to him, a cool place to do something. His brothers, however, weren’t interested. Fine, he said to himself. “I’ll do it myself.” Weeks after the doors opened, Le Grange feels as if it’s been open for years. Doug’s wife Debbie told me “the biggest thrill was being able to have outdoor seating finally.” Their Orange Coast Winery in Newport Beach has none. Le Grange has a spacious patio with ample seating, and when the mercury is boiling there are misters to keep you comfortable. The patio is dog-friendly, too. While visiting with Doug and Debbie, my partner Kat and I sampled several items from the Le Grange menu, prepared on this evening by sous chef Chris Kavanaugh. We began with maple-bacon wrapped dates stuffed with marscapone cheese. Doug says the dates were originally filled with goat cheese and they may go back to that recipe. Whatever they decide, it’s a delicious appetizer and a great way to start. We also shared an order of Bierocks, Debbie’s nod to her Nebraska heritage, based on runza, house-made pastry stuffed with beef and cabbage and served with a beer mustard dipping sauce. They are absolutely divine. Chef Chris brought our entrées. We were dining family style, so everyone got to taste everything. We began with the Le Grange Romaine lettuce salad, with torn Romaine, shaved watermelon radish, Bacon lardons, red onions, heirloom tomatoes, shaved Manchego cheese and bread crumbs tossed with green goddess dressing and topped with medium-rare bistro filet. This is a salad I could devour every day. We also shared pan-seared jerk chicken breast with pan-seared Brussels sprouts, fingerling potatoes, sautéed kale and scallion pesto, also sublime. We had been hearing raves about their shrimp and grits and it didn’t disappoint. made with aged sharp cheddar, Cajun shrimp, sun-dried tomatoes, micro cilantro and pine nut pesto, it’s easily one of the finest grits dishes I’ve ever enjoyed. We had a long and very enjoyable visit. Doug and Debbie both stressed that they want people to consider Le Grange as a spot to come wine tasting. “Old town Murrieta is the gateway to wine country,” Doug said. Why not stop here on the way in or out of wine country, and enjoy lunch before you go or dinner when you get back, he suggested. Doug has been making wine for many years now. There are currently 12 wines available for tasting now, with another eight in the warehouse that will be released gradually. Doug will be making red wine there starting this harvest. We tasted his Sauvignon Blanc, Pinot Gris, Malbec and Cabernet Sauvignon and enjoyed them all thoroughly. Le Grange also offers “guest wines” including a Napa Cabernet from Hess and a French Bordeaux. For dessert we enjoyed an incredible plate of churros tossed in cinnamon and sugar served with vanilla bean ice cream and drizzled with chocolate ganache. Chef also brought out tasty lemon and chocolate treats. Debbie told me they hope to offer pairings on the menu soon. Brunch is coming in the very near future. Le Grange (French for barn) is a most welcome addition to the Temecula valley in the heart of old town Murrieta. There is often live music and we recently enjoyed listening to Grace Richardson and George Hager there. On a second visit we had a Le Grange burger and a hummus plate. Everything we have tasted there was absolutely delicious.