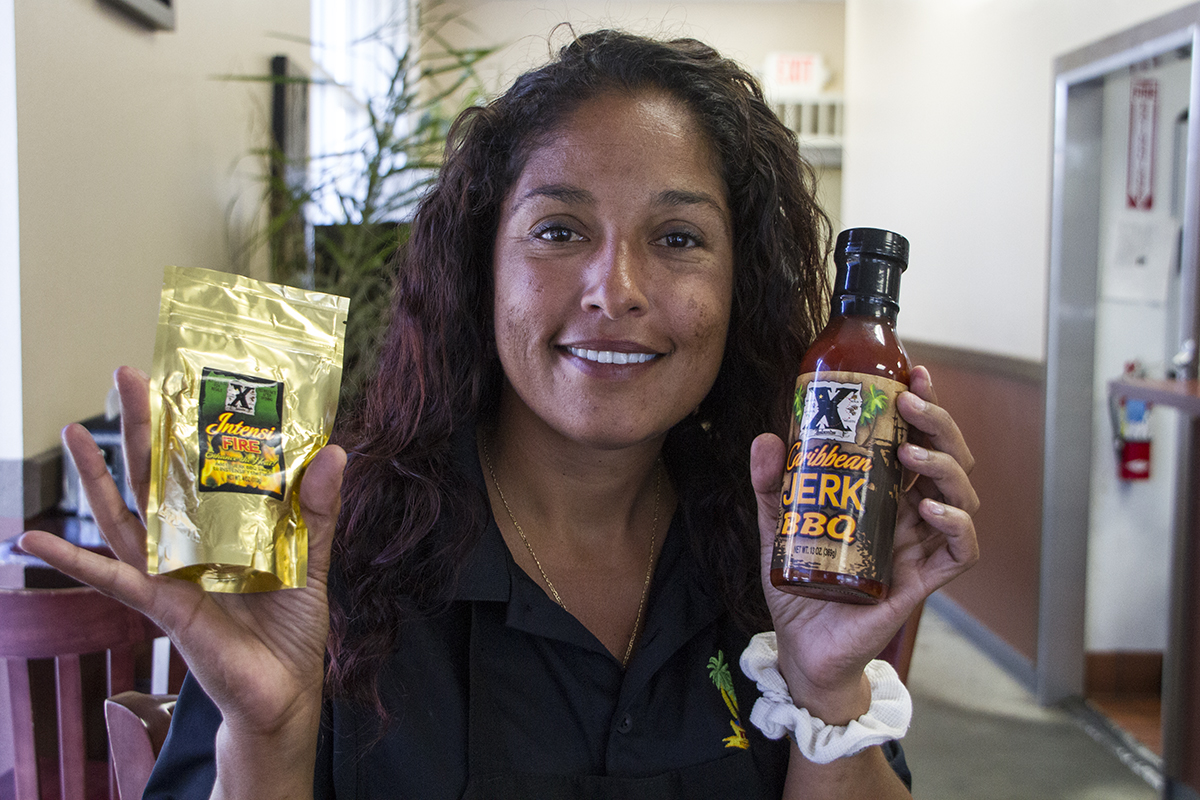 How do you pronounce Xiomara? If you ask her she’ll answer “Just call me Z.” Xiomara (pronounced Sio-mara) Hall owns Tropical BBQ in Murrieta. A widow with four children, her husband was killed in 2008 while deployed in Iraq. A native of Puerto Rico, she loves the Caribbean and its varied cuisine. Having lived on St. Croix in the US Virgin Islands myself for four years, we had a good visit about the different foods one finds from island to island. Xiomara was an accountant when the market dropped. A self-taught chef, she thought it was time for a change, so she purchased the Lazy Brothers market in 2012 and did a soft opening in April and a grand opening in September. Lazy Brothers was known for its barbeque and smoked meats and she didn’t want to alienate the existing clientele, so she fine-tuned the menu adding tropical touches. She’s perfected the Cuban sandwich, she says, from her time spent in Florida. You’ll find Caribbean staples like plantains, yucca fries, black beans and jerk chicken. Her jerk chicken sauce won the sauce category in Lifetime Network’s Supermarket Superstar. The show taped in February, but didn’t air until September and she was bound not to divulge that she had won.

In addition to her restaurant, Xiomara has a viable catering business and you’ll find her at parties and local events. She’s excited about being a part of this year’s Murrieta Rod Run. Her Caribbean Jerk Sauce with Intensi-Fire heat enhancer won the TV show. You can buy it at the restaurant or online. It comes in a two pack with the sauce and enhancer. She says it’s a challenge to try to get everything made in the U.S. She doesn’t know where purveyors are buying their bottles and boxes, but she’s doing her best to keep it local. She loves to enter barbeque competitions, but says it’s hard to compete with those who do it all the time and cook with gourmet cuts of Wagyu beef. When you taste her barbeque at the Pechanga Championship, you’ll be tasting what you’d get at her restaurant. Sylvie Curry is better known as “Lady of Q.” She was a member of the Four Q competitive barbeque team from 2006 – 2009, but the rest of her teammates started going their own separate ways. She took a few years off from competing, but decided it was in her blood so she went out on her own in 2012 as “Lady of Q.” She says what she does is “totally a hobby” albeit an expensive one. “My husband fishes and this is my hobby.”  She says she’s made a lot of friends and enjoys the camaraderie. Saturday is usually the big day, but after everything is all set up Friday night they get to unwind and kick back.

I asked what sets her apart and she answered that she’s female and solo. There are a lot of male competitors whose wives or girlfriends help with the physical work, but not too many women out on their own. The Pechanga Barbeque Festival is a nationwide competition held under the auspices of KCBS, the Kansas City Barbeque Society.  Competitors enter all four different categories: brisket, chicken, ribs and pork. I asked her what style of barbeque she cooks and she told me that there actually is a California style, known as West Coast Offense. It’s a combination of Kansas City style and others using various rubs and spices that originated in California. Sylvie loves Pechanga, calling it a very nice venue that takes good care of its guests.

The Pechanga Pro Barbeque Championship will take place Saturday June 21st from 10am – 5pm. For tickets or more information, visit www.Pechanga.com or call (877) 711-2946. If you’re looking to purchase a grill, I found this article answers virtually any questions you might have.