The Joy of JOYA Sangria 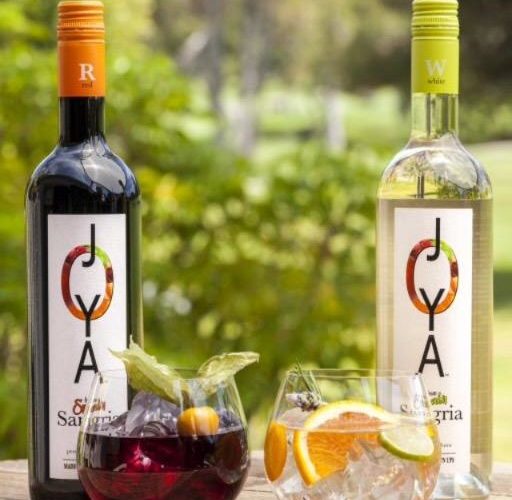 Since I started WINEormous nearly nine years ago, I’ve enjoyed the opportunity of meeting thousands of people and tasting literally thousands of wines. Just this week I had the opportunity to meet and visit with Eamon McDonald, founder and CEO of JOYA Sangria. We visited in his office in Corona, where I was able to learn not only about the brand, but to do an extensive tasting as well.

I learned a lot about JOYA. It’s imported from Spain and made with premium grapes. Red JOYA contains Tempranillo, Garnacha and Bobal with Mediterranean fruits and sugar. The white is made with the Airen grape with fruits and sugar. At 12%, it’s considerably higher in alcohol than most other bottled Sangrias. The proof though, is in the pudding, or in this instance, the tasting.

Eamon lined three glasses in front of me and filled each with ice. He added JOYA white Sangria to the first two glasses and JOYA red Sangria in the third. To the second glass he added a splash of red to create a rosé. I’ve tasted bottled Sangrias before and I anticipated something sugary sweet. I was very pleasantly surprised. The white is crisp and clean with just a hint of sweetness. The wine shines through as does the fruit. This was good! I then tried the rosé. I was amazed by how much color just a bit of the red added. Then I tasted it. The wine was totally transformed! The red added a depth to the white and created an entirely different taste profile. I then tasted the red. It’s clear these are made with premium grapes. As with the white, the taste of real wine was at the forefront, and the addition of fruit and sugar served to enhance it, not overpower it. He then had me taste some of the red Sangria he had put into a crock pot and added mulling spices to. It smelled like Christmas and tasted like heaven. He asked me if I was a vodka drinker and I told him I was. I said Stolichnaya was typically my vodka of choice. He represents a vodka called Shakespeare, originally distilled in Poland, now distilled in the U.S. by master distiller Mirek Wierzbowski. Tasted it straight first, and was impressed by how clean and bright it was. He then proceeded to add just a bit of red JOYA to the vodka and asked me to taste it. Although I think I would have preferred it on the rocks, the taste was excellent. He says he recommends it as an alternative to vodka and Red Bull.

Tasting Panel magazine awarded JOYA with a 90 point score, impressive for any wine, but stunning for a bottled Sangria. Shakespeare vodka received a four-star rating from The Spirit Journal and a gold medal for best vodka from the San Francisco Spirits competition.

I left with a healthy respect for JOYA Sangria as well as for Shakespeare vodka. Keep an eye out because I plan to offer you a link to purchase JOYA at a discounted price here on WINEormous. Once you taste it I have a feeling you’re going to want to keep some on hand.

Tom Plant launched WINEormous, a food, wine and travel blog in 2009. Based in Temecula, California, he offers intimate winery tours for no more than seven people. Tour details and pricing are available at www.temecula-tours.com. Call now to book your Temecula Winery Tour at (951) 907-9701! Ask about special discounts.