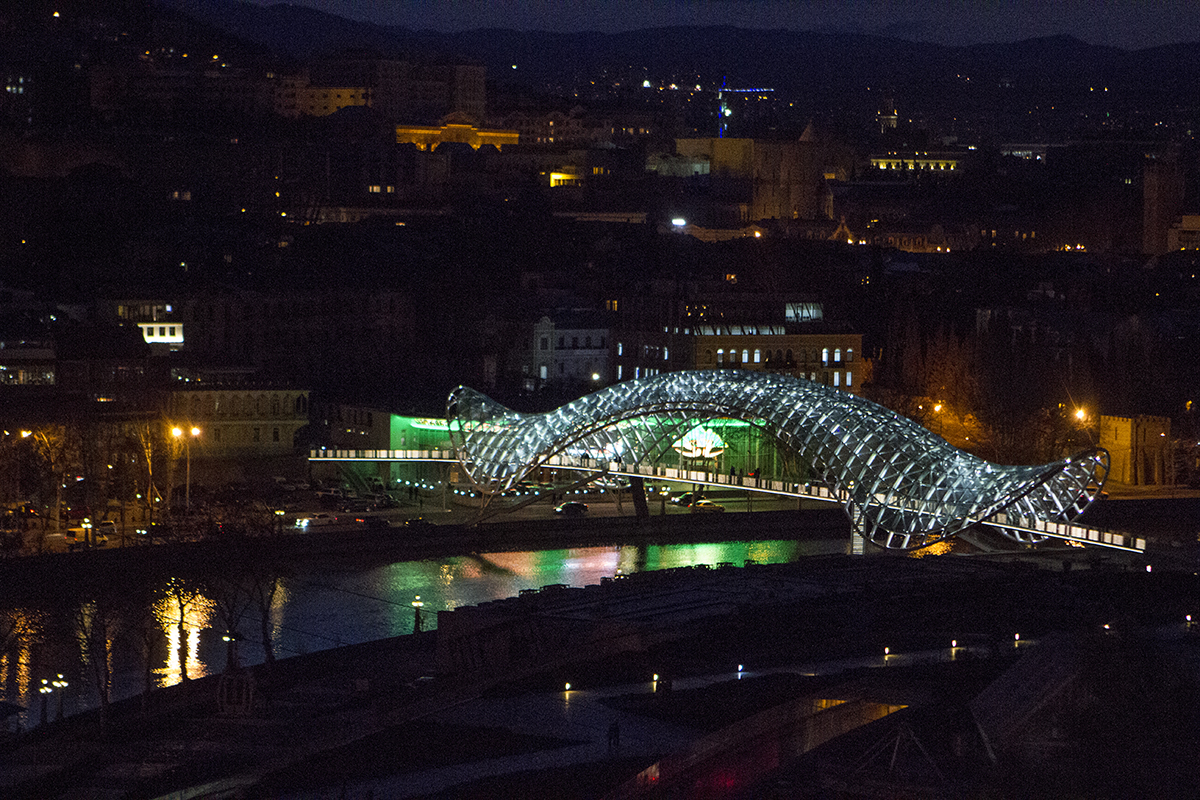 Georgia – Tbilisi and Beyond

All meals and excursions were paid for by the host. A portion of the airfare was subsidized. Georgia opened my eyes. I truly didn’t know what to expect from this mysterious land. Where I last left off, I had already begun to enjoy the warmth of the Georgian people and the culture dating back thousands of years. As one of our hosts said at the International Wine Tourism Conference, ” we have the best cuisine and hospitality in the world, and we save the best for our guests.”

We continued our Georgian excursion with an early visit to Bagrationi 1882, a leading sparkling wine producer and the first to export Georgian sparkling wines to the US. Our guide gave us a tour of this magnificent facility where the old and new meld seamlessly. The bottling line was in full swing and we watched as the workers loaded empty bottles and checked for quality control every step of the way. After our tour we enjoyed a selection of four sparklers, starting with the classic Extra Dry and finishing with the Royal Cuvée, ranging in price from about $13 to $38. Is 11am too early for brandy? Not in my book. Next stop was Sarajishvili, Tbilisi’s first producer of brandy dating back to 1884. Our exuberant host welcomed us and ushered us into this massive facility. We walked through the caves and saw antique barrels side by side with newer barrels. We learned how brandy is made and then, in an elegant parlor, we tasted a range of brandies paired with hors d’oeuvres. The bus waited for those of us who couldn’t resist taking a sample or two home.

We traveled to Mtskheta for lunch on the second floor of the Georgian Chamber of Wine for a meal I remember to this day. The service was impeccable and the food delicious. I’m a fan of spicy food and this was seasoned to perfection. Truly one of the finest meals I experienced while in Georgia. What followed was also extraordinary. We climbed up the side of a mountain for what seemed like ages until we reached the Jvari monastery, dating back to the 6th century. The views of the town of Mtskheka are stunning as is the view of the confluence of the Aragvi and Mtkvari rivers. Women donned headgear as we walked past the vendors into the monastery. It was incredibly peaceful until someone did something to enrage the monk, whether it was taking his photo or some other infraction, he let his displeasure be heard. Our last stop of the day before returning to Tbilisi was a visit to Château Mukhrani, a winery that was literally raised from the rubble. Construction of the château began in the late 1800s and took 12 years to complete. After falling into complete disrepair, a Georgian investment group purchased the property in 2002 and began the massive restoration project in 2007. Today the work is complete with only a few areas displaying what was there before they began. The caves have 20 tunnels restored to original design. We ended with a tasting of their still wines, featuring an assortment of Georgian and Bordeaux varietals. Dinner was at Restaurant Kopola overlooking the Mtkvari River and Narikala Castle. While we enjoyed seemingly endless plates of food and conversation with our Georgian hosts, costumed dancers took to the stage. We enjoyed plenty of wine and cha cha (Georgia’s answer to Grappa) and called it a night. Several more enticing days lay ahead.