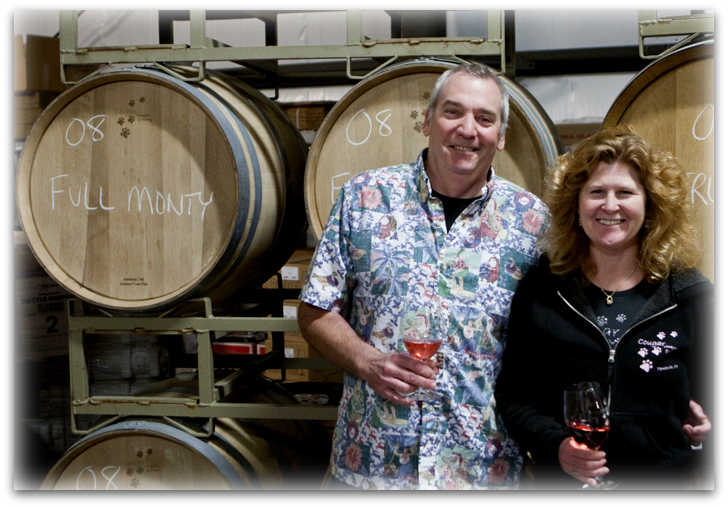 If you look closely, you’ll notice the cougar at Cougar Winery is wearing a San Diego Charger’s cap. There’s your first clue. Next, you’ll notice Radio Margaritaville playing not so softly in the background. This isn’t your parents’ winery. Welcome to Cougar!

Cougar has recently become my favorite winery to visit in the Temecula Valley and there are plenty to choose from. For starters, I don’t think you’ll find a better pourer anywhere than Jamie Schmutzer. Her passion for wine shines through in everything she does. If you’re lucky enough to have her pour for you and you’re not smiling when you’re done, check yourself into the hospital. Clearly there’s something wrong with you. Mike, Kim and Joey are exceptional as well. Any one of them will be glad to give you a tour of the winery, show you the tanks and the crusher/destemmer and give you a good idea of how owners Rick and Jennifer Buffington make their wines. Buffington is the last name that would pop into your head when you think of a winery that specializes in Italian varietals. Rick says he’s thinking about changing it to Buffingtano. Yes, he’s kidding.

The journey began in the early ’90s in Ft. Worth, Texas. A friend he was making beer with asked Rick if he wanted to make wine. Since he and Jennifer drank wine more than they did beer, they decided to give it a try and bought a wine making kit. They made five gallons of Merlot and, says Rick “no one got really sick.” A few years later, they moved to the Seattle area for a contract job with Boeing. Shortly thereafter they joined the Boeing Beer & Winemakers Club “just for fun”. They started buying grapes from Eastern Washington, trucking them back to Seattle and began making Merlot, Cabernet Sauvignon, Semillion and Chardonnay using the crushers and tanks at Boeing. They soon grew tired of waiting in line to use the equipment, so they started buying equipment and making wine at home. They lived on Cougar Mountain and have used that moniker for many projects: Cougar Software Solutions, Cougar Mountain Cattle and finally Cougar Vineyards. As the hobby grew, their available space shrank. Jennifer decided to dig out an area under the house. They met often with other area winemakers and picked up a little something from everyone they met with. After five years in Seattle, they were anxious to come home to California and they started looking for a piece of land with an acre where they could plant a vineyard, fool around and make some wine in their backyard. In 2001 they found what they were looking for in Fallbrook and asked Mike Jones from Atlas Peak to consult them on what they should plant. Mike told them that Montepulciano ought to do well there and would compliment the Sangiovese they were planning on growing. They joined the San Diego Amateur Winemaking Society and soon thereafter Rick found himself elected the group’s vice president. In 2004 they learned they could become a bonded wholesale winery, so they did it. “We had a three car, zero car garage/winery with 60 barrels and three little tanks” says Jennifer. They became friends with Steve and Valerie Andrews from Temecula Hills and Oak Mountain Wineries. As Steve began to upgrade his equipment, the Buffingtons bought used crusher/destemmers and tanks from him. As they’ve grown, they have gone on to sell that equipment to amateur winemakers who have dreams of growing. They were producing quite a bit of wine and began wholesaling it to places like Major Market and Daniel’s Apple Market as well as Albertsons in Fallbrook and to restaurants in downtown San Diego.

It was time to find a location where they could open a tasting room. Their “little hobby” had become serious. Steve Andrews wasn’t selling a sweet wine yet and told Rick they should retail their Muscat. They looked around Fallbrook and found the prices prohibitive. They found a property they fell in love with on De Portola Road in Temecula for about half of what they were looking at in San Diego County and took the plunge. Rick and Jennifer prefer lighter reds to full-bodied ones and besides that, other wineries were producing Cabs, Syrahs, Merlots and the like. They decided to go with all Italian varietals. Take a look at the Cougar menu and you’ll see names like Vermentino, Aglianico, Pinot Grigio, Dolcetto and Sangiovese. There’s also a Nero D’Avola and future plans include Arneis, Malvasi Bianca, Sagrantino and a “secret” Italian varietal. I know what it is, but I’m sworn to secrecy.

They hope to have a new tasting room open this summer, “one with bathrooms”, they both emphasized. Rick and Jennifer pride themselves on being approachable and accessible. At wine club events you’ll find them serivng food, pouring wine and sitting down to visit with you. Jen says “We’re not a cookie cutter – you won’t ever see “Buffington Estate Winery”. She’s a big believer in social networking. Cougar is on Facebook and twitter. Jen loves the fact that she can send out tweets during harvest and bottling and get the word out to their followers instantly. Once during bottling they were a few people short. Jen sent out a tweet and within an hour and a half they were good to go. If you’re looking for a fancy winery with an elegant entrance and ornate touches everywhere, look elsewhere. If the idea of throwing a tennis ball for their dogs Diego and Mocha appeals to you, you’re in luck. Cougar is as down to earth as it gets. Their wines are awfully good, too.