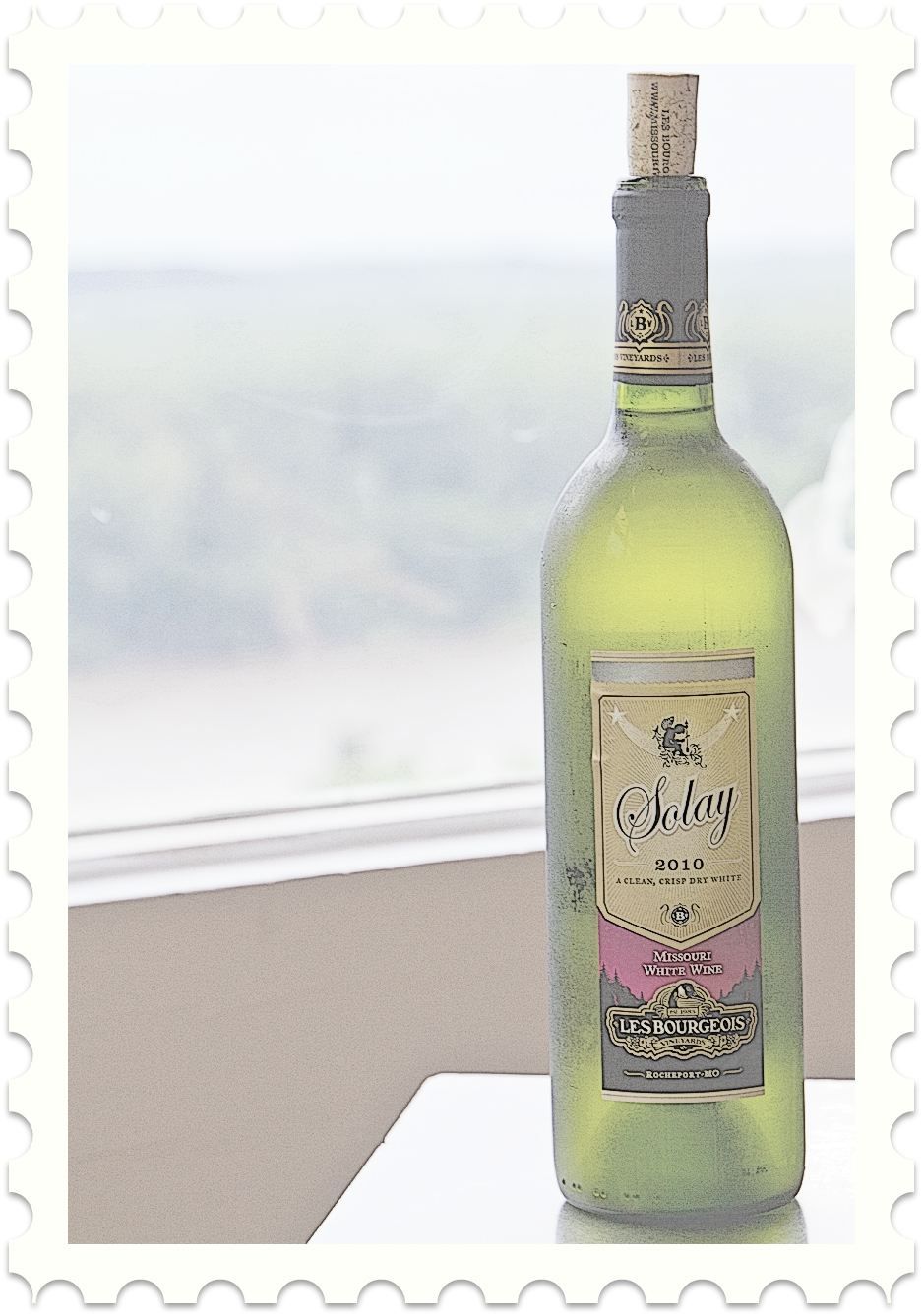 When I launched WINEormous about two and a half years ago, I had no idea where it would take me. When the opportunity to visit Columbia, MO earlier this year presented it, I thought ‘why not?’ I had no idea what to expect. To put it quite simply, Columbia blew me away. After spending a few memorable days in Lake of the Ozarks, our group hopped a bus and headed for Columbia. We had a stop to make first, though: Rocheport. We gathered at Les Bourgeois Winery‘s A-Frame overlooking the Missouri River and then stopped at the School House Bed & Breakfast, housed in what was once a school house for grades one through twelve. There are touches of the old school house in every corner. Posters of Dick and Jane. Blackboards. Owners and proprietors Mike and Lisa Friedemann showed us around and I was so impressed by what they have done with this 11 room B & B. We then stopped to walk a bit of Katy Trail State Park, on the former corridor of the Missouri-Kansas-Texas Railroad. The 225 mile long trail runs from Clinton to St. Charles following the Missouri River. With lush greenery on either side and the mighty Missouri to gaze upon, this was a wonderful stop. Our outing and brief walk had given me a healthy appetite, so when we arrived at Les Bourgeois Bistro for lunch, I was ready. Executive Chef Aaron Wells-Morgan presented us with a savory selection of food including some out-of-this-world Missouri beef. Owner Curtis Bourgeois shared his stories of making wine in Missouri as we dined and tasted several of his wines including Solay, a blend of white varietals, Chardonel, a dry white and Norton, a varietal you’ll come to know if you spend any time east of the Rockies. Following lunch, head winemaker Cory Bomgaars took us on a guided tour of the winery. They were undergoing renovations which have no doubt been completed by now. It was just about time for us to take the 15 minute drive to Columbia, but we had one last stop. The weather had been threatening all day and by the time we got to Yates House B & B for dessert with Dixie, the skies opened. It poured rain while we toured their six lovely rooms. Conrad Yates took us through the two buildings that house the B & B while Dixie was in the kitchen preparing pie and cookies for us. She handed each of us a copy of Dixie’s Kitchen at Yates House filled with recipes for everything from breakfast to dessert. From Rocheport we took the short drive to Columbia. We checked into the rustic Stoney Creek Inn before heading out for a progressive dinner. The three stops we made were, I thought, an excellent introduction to the heartbeat of Columbia. It was Addison’s for appetizers. The food was fresh and delicious and we nibbled on their Crab Rangoon dip with Tempura veggies, sweet potato chips with horseradish barbeque sauce, garlic and brown sugar brined Buffalo wings and the pièce de résistance,  Nachos Bianco, Italian pasta chips with Asiago cheese, Kalamata olives, banana peppers and mozzarella cheese. The entire time we were there I was captivated by the artwork on the walls from renowned local artist David Spear. His pieces brilliantly capture the feel of a time gone by and I enjoyed the opportunity to visit with him. In Columbia, Shakespeare’s Pizza outsells all the others and it’s not even close. There’s a good reason for that. Not only is the pizza surprisingly good, somehow it’s just a fun place to hang out. A quick visit to their website will let you know how laid back they are. They pride themselves on using the freshest ingredients including sausage made just for them, dough made fresh several times a day, hand sliced pepperoni and thickly sliced veggies piled high. Manager Kurt Mirtsching gave us a kitschy video presentation of the history of Shakespeare’s while we devoured their salads and pizzas. The rain had let up, so we strolled a few blocks away to Sparky’s Homemade Ice Cream. Sparky’s is not your typical ice cream parlor by any stretch of the imagination. Sparky’s features creamy delicious ice cream in a multitude of flavors including green tea, mango, lavender honey and cantaloupe. If you’e over 21 and you want something with a little kick, give their Guinness float, grasshopper or Bailey’s or Amaretto shakes a whirl. It’s a fun and funky place and it was the perfect way to wind down our first evening in Columbia. We went to bed little knowing what Mother Nature had on tap for the next day. The Art of David Spear

Columbia has an amazing arts district. We began the day at Perlow-Stevens Gallery and Café Berlin owner Eli Gay stopped by to introduce to the Clifton “Butch” Jones breakfast: a pancake burrito with apples and sausage. It sounds very strange, but it was incredibly good. We met several local artists and admired their work before heading next door to the Artlandish Gallery. You don’t want to miss a single nook or cranny in this place. There’s even a time machine there! We took in the art of David Spear again at Wabash Station and soaked in more exhibits at the Orr Street Studios, an enormous warehouse home to 25 artists working in various media. We concluded our visit to the North Village Arts District with a stop at the infamous Blue Note and a visit with owner Richard King. The Blue Note is the venue for live music in Columbia and has hosted its fair share of music notables over the past quarter century. We had one last item on our itinerary before lunch and that was a stop at the University of Missouri campus. Mizzou has been a part of Columbia dating back to 1839 with a current student body numbering more than 31,000. There’s so much to take in and I was astounded by our tour of the Reynolds Journalism Institute. This state of the art facility is on the cutting edge and has garnered the attention of Apple and Microsoft. Thomas Jefferson’s obelisk tombstone resides at MU as does the Beetle Bailey sculpture, a gift from alumnus Mort Walker, creator of the comic strip that bears Beetle’s name. It was lunchtime and we noticed the skies darkening and the winds picking up. We were greeted by Main Squeeze owner Leigh Lockhart. I’ll be honest. When I heard we we having lunch at an organic, vegetarian restaurant, I was less than thrilled. It took about 30 seconds to change my perception. Everything that comes out of Leigh’s kitchen is bursting with flavor. She is passionate about using the freshest local ingredients she can get her hands on. We savored a variety of soups, sandwiches, wraps and desserts and devoured every morsel. Looking outside, the skies were growing eerily darker and the winds were picking up. A sound caught our attention. We learned it was the wailing of a tornado warning. We left Main Squeeze and headed for the Rag Tag Cinema.

I have never been through a tornado warning before and I’ll tell you it’s unsettling. We walked into the back of the theater where an Abbott & Costello classic was being screened. Moments later we moved to the larger theater where television coverage of the weather activity was on display on the big screen. We made out okay. To the south in Joplin, the news wasn’t so good. The Rag Tag is home to the True/False Film Festival, one of the world’s largest documentary film festivals. Co-founder David Wilson gave us a background on how the theater came to life and how they began the festival in 2004. The 9th True/False Festival will take place March 1 – 4, 2012. The immediate danger passed, and we made our way to safe haven at the Stoney Creek Inn before our last culinary adventure in Columbia. The evening’s first stop was at bleu Restaurant & Wine Bar, where we sampled three exotic cocktails: Bleu Rosemary Lemonade, Cucumber Basil Cooler and a Port Cosmo (recipes below). Not only were they tasty, they were gorgeous. We also nibbled on assorted hors d’oeuvres including tasty house made potato chips and brussel sprouts with bacon. We strolled across the street to Sycamore, a restaurant that embraces the Slow Food movement and is endorsed by Slow Food Katy Trail. Chef and co-owner Mike Odette and fellow owner Sanford Speake made us feel right at home and the food they served us including beef tenderloin and duck was truly sensational. I was most impressed with their extensive wine list. All good things must come to an end and our evening wound down at the Wine Cellar & Bistro. Chef Craig Cyr presented us with a stunning tray of desserts that we sampled with a taste of wine. It was the ideal way to end an unforgettable trip.

Add all ingredients to shaker and give a quick shake. Pour into wine glass, top with Riesling and garnish with rosemary.

In a mixing glass muddle:

Give a quick shake.

To a shaker with ice add:

Shake vigorously. Serve on the rocks in a cocktail glass garnished with an orange slice.