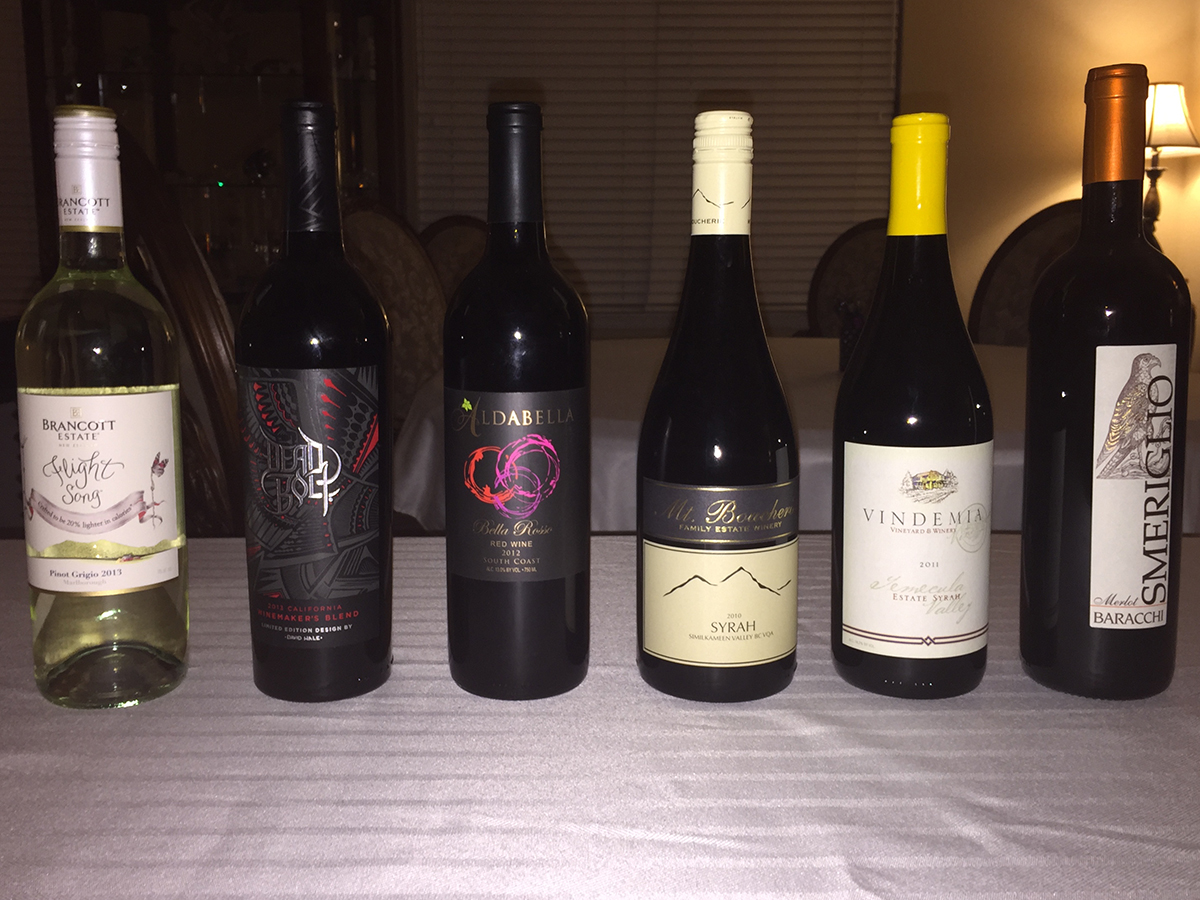 Cheers To Wine, Friends and Food

We’ve been meeting nearly once a week for more than a couple of years now. The faces are familiar with the same core attending nearly every tasting. Some drop off. A few new faces appear. All in all the mission is the same. I open around six bottles for the group to taste and comment on. Almost everyone brings a food dish and a “bonus” bottle. More often than not we wind up outside for conversation and cigars. Recently we met at Tony’s and started our evening with a couple of wines from J Vineyards in Sonoma starting with the 2013 Russian River Valley Chardonnay. Ken loved its “refreshing” nose, picking up butterscotch and pear. Jan got pear, too, as well as cream. Jake called it buttery with tropical fruit and a nice oaky finish. At $28 it averaged a score of four out of a possible five stars.

We moved on to the 2012 Russian River Valley Pinot Noir from J which Jan called “beautiful.” For her it was well-balanced with mild spice and a hint of berry. Chris liked the brilliant ruby color with cherry and raspberry on the nose with notes of white pepper and cola on the palate and vanilla on the finish. I found it to be a quintessential Pinot with a candy nose and a long finish. It averaged slightly more than four stars and it sells for $40. The three other wines we tasted that night missed the mark. As the bottles may have been flawed I won’t comment on them. On another evening we all met at Kim and Brian’s and we began with the 2013 Brancott Estate “Flight Song” Pinot Grigio. Flight Song is Brancott’s lower calorie line of wines, made from grapes harvested earlier than normal therefore with less sugar. Ken called it “very fresh and nicely fruity, a nice go-to summer wine.” Sue said it was fresh and crisp and a great value at $12. Tony said “like it lots!”

Next was the 2013 Dead Bolt Red Blend from Sonoma. Debi said it “drinks above its price point” which is $10. Chris got notes of plum and dark cherry on the nose and thought the price point was excellent. Jake said it was a good example of why lower priced wines should be blends and called it a superb value.

We then tasted the 2011 Mt. Boucherie Syrah from the Okanagan in British Columbia. Brian thought it was “soft, smoky and sultry” and would gladly pay $20 for it. The rest of the tasters found it a bit harsh and it got an average score of about three stars.

Next was a Temecula Syrah, Vindemia’s 2011 vintage. Chris gave it four and a half stars and liked it spicy dark fruit nose with notes of vanilla, allspice and tobacco on the palate. Ken loved the nose and said it was like bacon and thought the palate was great. Jake called it “a fine effort, as good as any Santa Barbara Syrah.” It sells for $42 and scored better than  four stars.

We finished the evening with Barrachi Smerglio’s 2008 Merlot from Italy. Ken called the nose fabulous, dark berry and very dusky with big licorice. I liked the extracted color and expressive nose. Jean got chocolate and cherries and thought it needed time to open. Tony called it the best of the night. It was Sue’s favorite, too and the panel gave this $36 wine just over four stars. You can purchase this wine here.

We’ve tasted several other wines and we have more yet to sip. More to follow in the near future. The wines we tasted were provided at no charge.