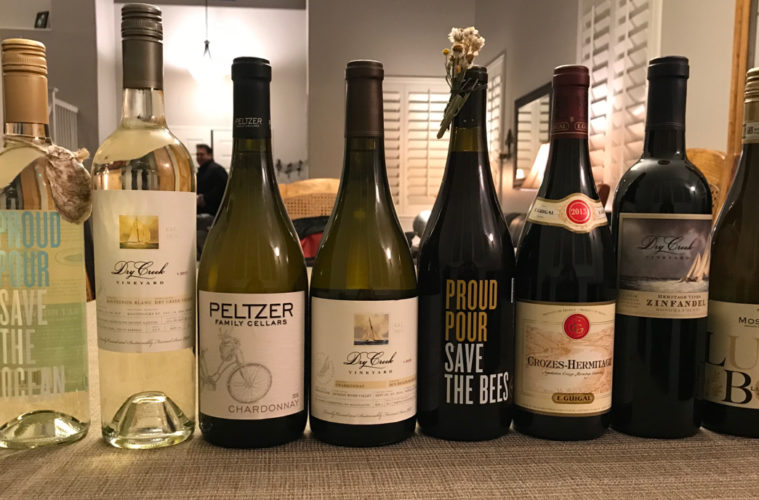 Catching Up With Wine Tasting With the mercury content to hover at the century mark or thereabouts, I thought it might be comforting to go back to a cool evening in February at Esther and Alex’s place. We did what we do about every other week. We taste (and drink) wine, share food and conversation. We normally taste six wines, but on this evening we had eight bottles in front of us.

Proud Pour’s 2015 Sauvignon Blanc was the first wine we tasted. The oyster shell hung around the neck of the bottle demonstrates this unique winery’s mission: to provide a positive social impact. 100 oysters are restored and 3,000 gallons of ocean water are filtered for each bottle sold. Pale straw in color, I liked its grassy nose and crisp acidity. Maki called it awesome. Brian called it a superior wine at the $18 price point. Made from organically farmed Mendocino county grapes, it scored just about four out of five stars.

Next was the 2017 Dry Creek Vineyard Sauvignon Blanc. Tony remarked on its somewhat peachy flavor. Karla called it “kind of yummy.” Brian said it was a perfect pairing with Lemonades Girl Scout cookies. Laura loved the finish. With touches of Sauvignon Musqué and Sauvignon Gris, it scored just over three and a half stars and it sells for $20.

We tasted an offering from Temecula, the 2016 Peltzer Family Cellars Chardonnay. Alex called it very smooth. Laura liked it but felt it was overpriced at $34. Kathy thought it paired well with shortbread cookies. It scored about three stars. We tried another Chardonnay, the 2016 Estate Block 10 from Dry Creek Vineyard. On its own it was delicious, but it didn’t play well with cookies, which gave it a somewhat bitter taste. Kim enjoyed the lemon, apple and caramel with a bit of lime on the finish. It scored a solid four stars and it sells for $32.

We switched to reds, beginning with another Proud Pour wine, the 2014 Willamette Valley Pinot Noir. This bottle comes with dried wildflowers around the neck and 875 wildflowers are planted and 90 square feet of wildflower habitat is restored for each bottle sold. Kim enjoyed the floral nose. Mike called it very good. Kat loved the finish. At $19, it scored just under four stars.

From France we tasted the 2013 E. Guigal Crozes-Hermitage. With its deep Burgundy color, I found this wine austere and in need of more time in bottle. This Syrah based wine is most definitely old-world. Laura simply said it was “very nice.” Tony enjoyed it. Brian called it “the French countryside in a bottle.” It scored just over four stars and it’s available for $27.

Next to last was Dry Creek’s 2016 Heritage Vines Zinfandel. With a bit of Petite Sirah and a splash of Primitiv0, Brian picked up lots of lush dark fruit and a somewhat raisiny sweetness. I liked the raspberry nose and crimson rim. Mike said “Wow!” Laura called it very, very good. With a couple of perfect five-star scores it averaged better than four stars. You can find it for $24 or less.

We ended with Luca Bosia’s 2016 Moscato d’Asti. Laura called it very good for the price. Alex thought it was very tasty, especially at $14. Mike said it was “so good! The best so far!” Kim said a good summer wine mixed with fresh fruit. A few found it too sweet. It scored just under four stars.